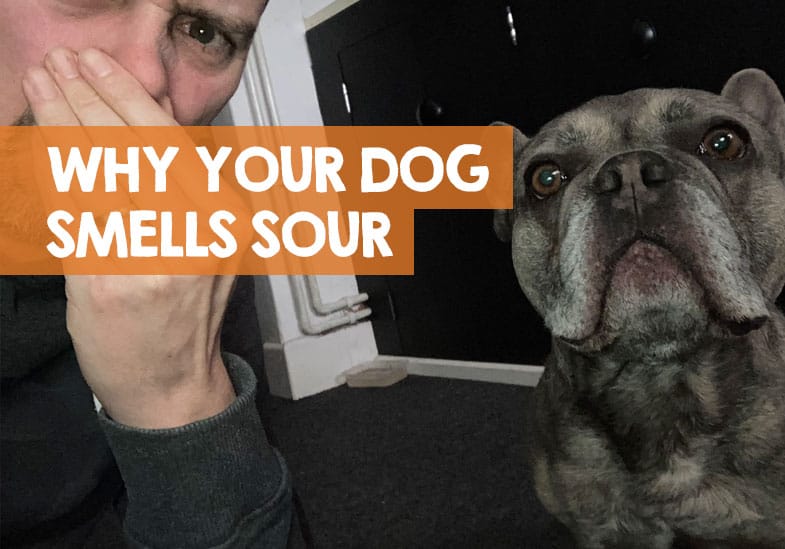 Every dog owner would like their dog to smell like roses. However, in reality, this is never going to be the case – most dogs stink at some point, and some dogs even smell like sour milk! Dogs can have sour breath, poop, faces, and ears!

Identifying where this sour smell on your dog has come from can be a challenge for many pet parents, and they will be left scratching their heads in confusion and holding their noses in disgust.

It can also cause a lot of stress for those who might be worried that their dog is suffering from an undetected or otherwise unknown health condition… but why do dogs smell sour?

What does it mean when your dog smells like sour milk?

In most cases, the sour smells can be cleared up with no real repercussions to your dog’s overall health. It is by no means rare, and most veterinarians will be able to treat whatever is causing the issue without any trouble at all.

Below I will explain what causes this sour milk smell to develop in the first place, as well as how you can prevent it from occurring in your dog. With this information in hand, you will better be equipped to deal with the situation should it ever arise in your pooch.

Unfortunately, urinary tract infections are very common in dogs and account for many canine’s sour smells. They are usually caused by bacterial infections, which often develop when normal skin and gastrointestinal flora manage to slip past the urinary tract’s natural in-built defenses.

From here, this bacterium slowly begins to spread in the urinary tract, resulting in the infection… and your dog possibly smelling like sour milk – particularly around the back end and poop.

In general, urinary tract infections are more common in female dogs, however, it not unusual for male dogs to develop them too, especially if they are suffering from a pre-existing health condition.

For example, dogs with chronic kidney disease and other serious medical conditions are at a greater risk of urinary tract infections than healthier canines.

In terms of symptoms, dogs suffering from urinary tract infections may cry or whimper during urination, accidentally pee inside the home, require being let out to relieve themselves more often, have a fever, or even show signs of blood in their urine.

They will often develop their sour odor from constantly licking at their genitals, which will result in the smell of the infection wafting from their mouth area as they breathe.

If you suspect your dog has a urinary tract infection, take them to the vet immediately. In some cases, dogs will show relatively few symptoms apart from the sour odor.

Although most urinary tract infections are easily treatable, they are often painful and can sometimes be a sign of a more serious condition such as cancer.

This could be why your dog’s ear smell sour.

These infections essentially occur as a result of yeast reproducing at an abnormal rate until it turns into a significant problem. In the majority of cases, this condition most commonly affects dogs whose immune systems are unable to work correctly or are suppressed by tablets.

Unfortunately, many common canine medications indirectly cause yeast infections to occur by diminishing the number of bacteria in your dog’s body that helps keep the yeast at a manageable and healthy level – If you find yourself concerned about this, talk to your vet about your dog’s current medication.

Additionally, yeast infections are by and far the most common in breeds of dogs that sport a large number of skin folds or that are genetically predisposed to this condition.

Some of the main symptoms of yeast infections are redness or itching around the skin or inside the ears, hair loss, open sores, crusty or flaky skin, and a change in overall skin color.

However, dogs will often develop either a sour or sweet-smelling odor alongside these symptoms, depending on the severity of their condition.

Likewise, if you notice that your dog has a sour smell on the ears and face and is scratching or chewing at its skin or shaking its head for long periods, it is time to take them to the vet.

Although this is unlikely, yeast infections can sometimes be a sign of a more serious underlying health condition.

From time to time, smelly sour odors can simply occur as a result of dog collars and harnesses being dirty. Although these smells will rarely be sour in nature, it is not unheard of and they can sometimes be the culprit for your dog’s foul odor.

If you enjoy taking your pooch for walks in the countryside or other areas where there are copious amounts of dirt, mud, water, or potential animal waste, make sure to clean their collar and harness regularly.

Without doing this, the odor from these accessories may linger on your dog’s coat for several hours after you have taken them for a walk.

For example, my dog loves rolling in fox poop. This can result in the collar of my dog smelling like sour milk… and it needs a very thorough wash to get rid of the stink.

If you suspect the same, try changing your dog’s collar or harness for a different one to see if they still carry the same sour milk smell. If you are unable to get rid of the odor from your dog’s accessories, make sure that you dispose of these items and replace them.

Similarly, make sure that you clean or replace your dog’s bed from time to time. In general, your dog’s bed is where it will spend most of its time resting, and as a result, bodily fluids, dirt, and fur may all compound causing it to develop an extremely stinky odor.

If your dog is constantly in and out of its bed, it may naturally carry this stinky scent on its fur throughout the day. If you are eager to prevent your dog bed from smelling in the first place, make sure that you wash your dog after they have been rolling in mud or anything unpleasant. Similarly, think about covering the bed with a washable blanket that you can easily throw in the washing machine.

If you suspect this is the case with your pooch, take them to the vet so that they can have them emptied. It is possible to do this yourself, however, we recommend that you talk to a vet before trying this.

Dogs are smelly creatures at the best of times, regardless of their pet parents’ efforts to keep their smelly odors at bay.

If you own a canine companion, the chances are that you are very familiar with their scent and probably no longer detect it. However, despite this familiarity, at some point during a dog’s life, they will likely develop a strong sour scent that will cause even the most nose blind of owners to wrinkle their noses in distaste – this is pretty much inevitable and is just part and parcel of owning a canine, unfortunately.

In general, nasty smells will only develop as a result of your furry companion rolling in something it shouldn’t have (such as cat or fox poop), and after receiving a quick bath, the smell should disappear without any lingering issues.

In addition, with some prior caution, you should be able to prevent your pooch from partaking in this behavior in the first place, eliminating the risk that they will roll in something stinky in the future.

However, when your dog smells sour, it can be incredibly difficult or even impossible to eliminate it completely. Despite your best efforts, and multiple baths, this potent sour smell will linger for long periods, eventually permeating throughout the home.

If you are concerned about your dog smelling like sour milk, whether it’s the breath, mouth, ears, or face, please ask a vet for professional advice.