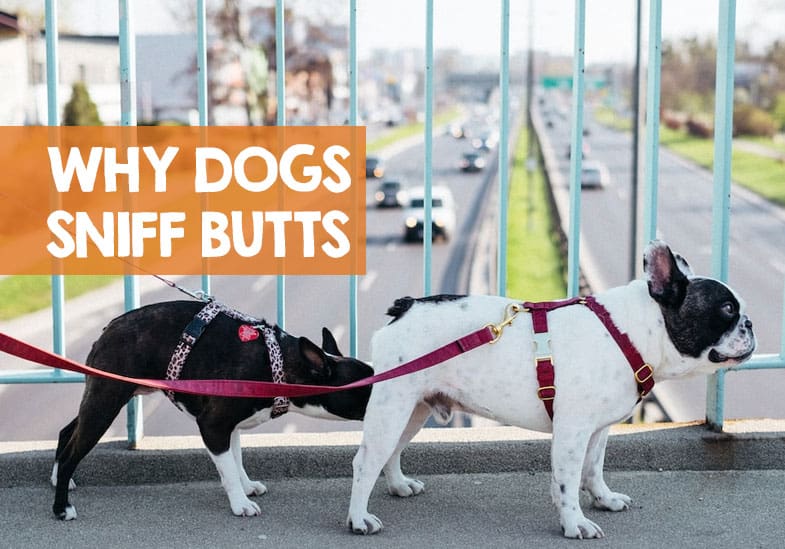 Dogs have a wide range of disgusting and strange habits, and sniffing each other’s butts is certainly up there. What is it about another dog’s butt, bottom, bum or whatever you like to call it, that makes it worthy of a long sniff and investigation?

Well, I very much doubt you’re surprised to hear that there’s a very good reason why dogs sniff butts:

Dogs sniff butts to find out more about the dog they have just met. The smells can let them understand whether they have met the dog before, gender, health, mood, whether the dog is a potential partner, what they eat, and because smelling butts and stinky things is fun.

Why dogs sniff bottoms and butts

When taking your dog for a walk or at the local park, chances are, you’ll witness a butt-sniffing session between them and other dogs.

You might even think there’s a proctology exam going on because of how keen they are when fulfilling their butt-sniffing roles. It’s not pleasant when you think about – can you imagine us doing it when we meet complete strangers!

Why on earth our dogs head straight for the bum when meeting other dogs had long-since baffled people until the last few decades.? What could possibly be that amazing about another dog’s backside?

For starters, dog butt sniffing is a habit hard-wired into them. Your dog will sniff butts for as long as they live for this simple reason: it’s in their genes.

Besides that, here are three mind-blowing reasons behind this weird-yet-normal dog behavior:

Butt sniffs between dogs can be compared to friendly handshakes between humans. When meeting for the first time, butt sniffing allows dogs to create a relaxing environment for a detailed get-to-know each other.

You see, most dog fights often start with prolonged eye contact (here’s how to safely intervene). So, when your dog goes right for the other dog’s bum, they want to avoid giving their potential canine friend an offensive stare.

Your dog probably knows that if they make firm eye contact, the other dog may not take it lightly. And they wouldn’t want that because their goal is to spark a friendship, not a fight.

Think of why dogs sniff each other’s bums as being like a greeting ritual that helps dogs take things to the next level.

In most cases, the dog with dominant traits will be the one to begin the sniffing. Perhaps to let the other know they will be “boss” in the friendship.

2. Sniffing butts to learn more about the other dog

Another reason why dogs will sniff other dog’s butts is to gather as much personal information about their potential canine buddy.

There are three communication tools that dogs have that we humans lack:

Now, dogs have finely-tuned noses, which experts estimate to be more than 10,000 more powerful than ours. This superiority enables dogs to smell “odorless” body chemicals.

Handy Hint: Some people believe a dog’s sense of smell is so good it can detect whether humans are related to each other. Here’s the truth about that.

In other words, no dog’s bottom smells the same. Factors like diet, genetics, health status, and emotional state influence the chemical makeup of these secretions – which can often be a nasty fishy smell.

Your dog’s signature scent is on their bum. And this unique scent remains in the memory of any dog that sniffs your furry pal’s behind. It mean that your dog will smell the other’s butt, and will know whether they have met before.

But, if they don’t know each other, the butt sniffing provides a wealth of information. By bottom sniffing they can gather important personal details about their canine mate, for example:

At this point, you’re probably thinking, “That’s a ton of information! How, exactly, does a dog’s nose manage to gather all that? “

Our four-legged friends have a super-sensitive organ in their nasal passage called the Jacobson’s organ. This part has one major function — smelling chemicals and sending details to the brain.

When you see your dog sniffing another dog’s bum, the Jacobson’s organ is at work.

This organ has its own nerves that connect directly to a specific area in your dog’s brain (the part that analyzes and accurately interprets the chemical odors sent by the nerves).

And as your dog sniffs another’s butt, the Jacobson’s organ won’t capture any poop scent or odor that isn’t chemical-related. That means there won’t be smells that might get in the way of your dog having accurate information about the other dog.

A butt sniff is supposed to offer a relaxing experience for the other dog. But some dogs simply don’t know how to do it right.

Ever been to a party where someone asked for too many personal details from you too soon?

That’s how some dogs are when initiating butt sniffs. They may act a bit aggressive while sniffing (since they want to know so much at a go), making the other dog uncomfortable.

If a dog doesn’t enjoy these sniffs, they’ll likely assume a sitting posture or flee.

Some dogs hate extended butt sniffs because of a traumatic experience they had. For others, it might be because they’re under-socialized or suffer from anxiety.

If you realize your furry pal is somehow a bully when sniffing, it’s best to interrupt the sniffing session so that they leave the uncomfortable dog alone.

I touched on this in the previous point, as butt-sniffing is also a dog’s way of refreshing their memory of another dog.

When your dog gets a whiff of the other dog’s signature scent during the first encounter, it remains in their associative memory — a type of memory in dogs that stores scents associated with a particular person, animal, or thing.

A quick sniff will let your dog know whether they’ve ever bumped into that dog.

Put simply, the previously stored scent memories of the other dog will flood your furry pal’s brain after a few backside bum sniffs.

And depending on how their first encounter was, expect to see tails wagging high in the air or a teeth-flashing session filled with growls.

Sometimes, dogs choose to interact with us as they would with their canine mates. They do this by smelling our bums, and other parts of our body, like ears, and the occasional obsession with smelling your crotch.

The chemical odors in these glands are much stronger (and intriguing to dogs) in humans whose bodies have a lot going on. For instance:

Dogs tend to stick their noses more on the bottoms of individuals in any of the situations above.

To curb this seemingly embarrassing behavior, you can redirect your dog’s focus with a toy or treat if they start sniffing you or a guest out of nowhere.

While dogs can’t help but sniff our backsides since it’s in their DNA, I bet most of us would prefer if they asked first rather than catch us off guard.

Handy Hint: How to get rid of that nasty fishy smell your dog has.

Why do dogs like to smell each other’s bums?

As discussed earlier, dogs like to smell each other’s behinds since it’s a polite greeting and a way to obtain helpful information about the other dog they’re getting to know.

Why do dogs smell each other’s butts?

It’s a polite greeting ritual and a way for them to collect meaningful personal details about the other dog.

Why do dogs sniff human bottoms?

There are a few interesting reasons why dogs are notorious bum sniffers. As you’ve now seen, butt sniffing is the best way dogs obtain meaningful information about each other. It’s also a polite form of dog-to-dog greeting as they get to know one another.