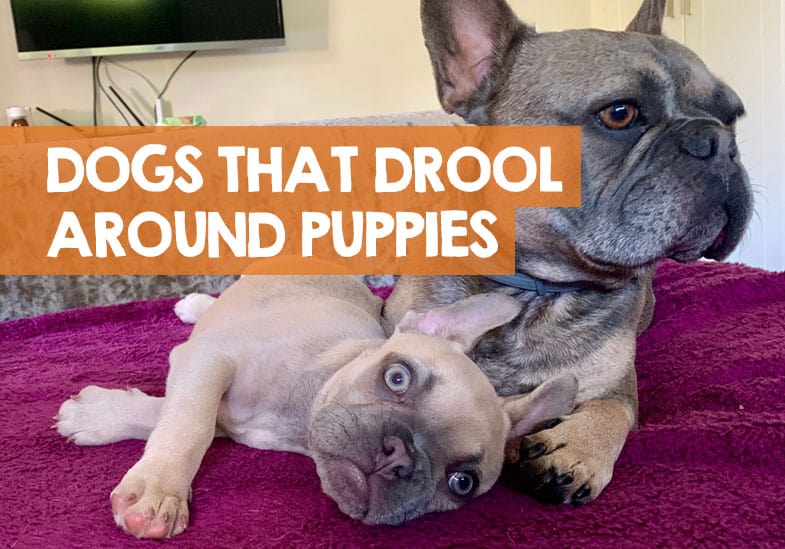 One of the more bizarre traits you might have witnessed your dog doing, is drooling behavior around a new puppy. If your dog shows excessive drooling in the presence of puppies, it can be disconcerting, with a worry about what could happen next.

There are a number of possible reasons why your dog salivates around puppies. I’ve put the very short answer below. Please read further though so you can pinpoint the specific reason your dog does this and when you should worry.

Why is my dog drooling around the new puppy? Dogs drool and salivate around new puppies for reasons including stress, excitement, jealousy, and desire. The will be visual clues as to the exact reason your dog salivates near puppies which are discussed below.

Why dogs drool around new puppies

But which one is it for your dog? For example, if your dog is female, it could be a very different reason for salivating compared to a male. What I would say though, is that when dogs exhibit drooling behavior around puppies, it hardly ever stems from outright aggression.

Instead, it tends to be triggered by several different emotional and physical factors. You need only look online to see how prevalent this behavior is, with dog owners from all over the world looking for an answer as to the cause of this unique phenomenon.

Naturally, this weird quirk makes pet parents nervous. After all, surely drooling is an indicator of aggression, or at the very least, a visible sign of distress.

Here are the various reasons that dogs drool when near new puppies. Read through them all and you should hopefully identify why you are witnessing the salivating behavior.

Feelings of stress and anxiety are one of the more common reasons that cause dogs to drool excessively. Although we may view our dogs as confident and self-assured, they can still experience uncomfortable emotions, especially in new and unfamiliar situations, no matter their breed or personality.

Often, dogs will drool when they are confused or otherwise unsure how to react around puppies. You will also see very similar behavior around human babies.

Therefore, it is important to slowly introduce your dog to younger pups to ensure that they do not become overwhelmed.

Although this might not seem a big deal at first glance, dogs can quickly become extremely stressed and anxious if not allowed time to adjust to a new canine in the home.

Without taking the right steps, adult dogs can quickly develop anxiety issues around puppies that can last a lifetime.

Additionally, some dogs can begin to develop negative associations through this, leading to an increased chance that they will display aggressive tendencies around younger dogs in the future.

At the best of times, dogs are excitable creatures, often wanting to play, chase, and leap all over the place when they come across something new. It is for this very reason that many friendly or high energy dogs drool around puppies, especially when meeting a new puppy for the first time.

Although this behavior is not particularly worrying in itself, over-excitement should be discouraged in most situations as it can lead to dangerous altercations.

For example, very young puppies are delicate and can easily become injured, sometimes seriously, after playing or roughhousing with older canines.

Therefore, you should always remove your dog from your puppy’s presence when they begin to show signs of overexcitement. Some common symptoms to look out for are excessive jumping, panting, random pacing, barking, teeth-chattering, and full body shaking – and of course, the drooling and salivating near the puppy.

After a week or so, your dog should begin to naturally calm down and stop drooling around the new puppy. However, it is important to remember that you should be vigilant for signs of overexcitement for at least the first few weeks.

Always stay nearby when your puppy and older dog are in the same room and monitor their interactions together. As your pup begins to grow into an adult, it will naturally become more resilient, often choosing to initiate play fights by itself.

Unfortunately, dogs are no strangers to jealousy. Just like their human counterparts, they can become envious if they are no longer the center of attention or when receiving less affection than the norm – often drooling as a result of this perceived slight.

It is not unusual for dog owners to favor the new puppy, giving them treats, playing with them, and teaching them new tricks. Likewise, children can become particularly besotted with puppies, no longer paying much attention to the older dog at all.

In cases like this, it’s not uncommon to see both male and females dogs drooling around puppies of all ages.

Therefore, it is important to provide both your new pup and resident canine with equal amounts of attention if you want them to accept and love each other. For example, if you have young children, try and explain to them that your older dog will begin to feel sad if they only spend their time with the new puppy.

Likewise, encourage activities that equally involve the participation of both dogs, such as walks in the park and games like fetch.

Additionally, be mindful of your dog’s favorite toys and discourage your pup from taking them if need be. Without a healthy balance, both canines can quickly develop an unhealthy relationship with each other in the future, leading to fights over food, affection, and toys.

Although it is strange to imagine for many dog owners, adult dogs can sometimes develop a sexual attraction to older puppies. Thankfully, this phenomenon is rare, and in most cases, only occurs when a puppy has reached sexual maturity or is in heat.

That being said, it can be a stressful time for both owners and canines when this happens.

If you notice that your male dog is starting to drool around puppies or is displaying other sexual behaviors, like trying to mount your puppy, separate the two dogs immediately.

At times, excessive drooling can indicate that your dog is suffering from health issues, regardless of whether the dog drools around the new puppy or not.

For example, anything that prevents your pooch from swallowing normally can lead to this unfortunate trait, as this will cause saliva to gradually build up and leak from their mouth.

Tooth fractures, tartar buildup, and irritated gums are the most likely suspects, although tumors and foreign objects becoming stuck in the mouth can also cause excessive drooling. If you suspect this is the case, take your pooch to the vet immediately.

Handy Hint: I’ve previously written a guide which explains how to look for toothache in your dog before it gets too painful.

Drooling can also occur as a side effect of your pooch developing an upset stomach. Motion sickness is often the biggest culprit, causing nausea and other symptoms of illness.

Likewise. if your dog is prone to carsickness and has just joined you on the journey to pick up your new puppy, make sure to wait a while before introducing them to each other.

Additionally, the consumption of toxic materials and other non-dog-friendly items, edible or otherwise, is a dangerous possibility when it relates to drooling.

If you believe that your dpg has consumed something dangerous, or is showing other symptoms of stomach distress, such as vomiting, shaking, or lethargy, immediately contact your vet.

How to stop your dog drooling near new puppies

Thankfully, there are many ways in which you can stop your dog’s habit of drooling around puppies. First and foremost, as stated above, you should first rule out any health problems that could be causing the issue.

If your dog is constantly drooling around your pup, discuss the issue with your vet, and try to rule out any medical issues that could be causing this behavior.

In many instances, your vet may recommend that your dog (especially if nervous) should be given a calming snack or spray treatment before meeting their new sibling.

Often, when it comes to nervous or excited dogs, ensure that you have created a relaxing and peaceful environment to meet the new puppy. You should firstly remove toys and other distractions and then make sure that your puppy is calm, only introducing your pooch after they have been for a long walk.

If your dog begins to drool, remove them from the room for a few minutes and then re-introduce them. After a few repetitions, your dog should begin to significantly calm down and, hopefully, stop drooling all together.

Lastly, remain patient as it may take a week or two for your dog to become completely used to the puppy’s presence.

Bringing a new puppy home for the first time is often a nerve-wracking and terrifying experience for dog lovers, especially when they already own a pooch who may be territorial.

Although most dogs will react positively to a new pup in the household, there are no guarantees that this will be the case for every pooch. Similar to humans, dogs display a variety of personality traits, often making it difficult to predict how they will react to a new canine presence in the home.

Furthermore, it is not uncommon for dogs to display strange behavior at the best of times, and nowhere is this more apparent than when a new puppy seemingly pops up out of the blue.

It is not unheard of for dogs to pace, growl, whimper, act out of character, and behave in an unpredictable manner around younger dogs.

Drooling and salivating is one such quirk. In most cases, your dog drooling around new puppies should not be a concern… but check against the list I supplied just in cases there’s a more serious issue at play.