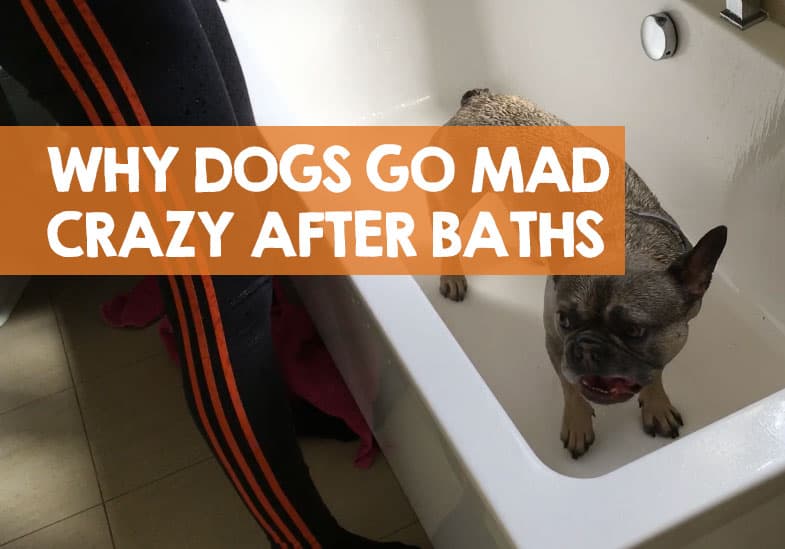 My dog is crazy at the best of times, after all he’s a French Bulldog; a breed renowned for getting the zoomies. But there’s one thing to guarantee him taking the craziness to the next level, and that’s after he’s had a bath.

If you have seen the same with your dog, then here I’ve attempted to give the best answer to why some dogs go crazy after a bath with the zoomies: there’s never been a scientific study, so a lot of this is based on what we can only assume.

That’s the short answer, and in truth, it doesn’t tell you half the story. Keep reading to find out why dogs go mad after a bath, and what the bath-times zoomies mean.

Why do dogs get zoomies after a bath?

Scroll down to see the most obvious reasons why dogs get the zoomies after a bath. But first of all, we need to uncover what is known about the zoomies.

If you didn’t know, it’s that frenetic activity after a bath of running like crazy, in circles, and up on furniture that you see your dog do after getting wet. The official name for the zoomies is Frenetic Random Activity Periods, or the FRAPs for short.

There are no current studies into the zoomies, but here’s what Marc Bekoff, a professor emeritus of Ecology and Evolutionary Biology at the University of Colorado says:

“Zoomies are high-energy bursts of activity in which a dog looks he is possessed, after which they often lie down exhausted as if they’ve run a marathon. On these zoomies, some dogs chase their tail until they spin so fast, they fall over, only to do it again and again, some dash here and there but somehow seem to know the dimensions of their body and rarely run into an object.”

Reasons your dog goes crazy after a bath

Now you know what zoomies are, here’s all the reasons why your dog goes crazy after a bath or getting wet with the FRAPs or zoomies.

1. Dogs go crazy to get dry

One of the most obvious reasons for dogs to go crazy with the zoomies after a bath will be to dry themselves off.

This is the aspect of bath-time I hate most with our dog, as no matter how much we towel him down, he does that crazy shake. Water gets everywhere, but you can’t really blame him.

Some dogs might go mad too if they have water in their ears. They can’t get a towel or finger in their ear like we do, so an almighty run around and shake could be the best way to get the fluid out.

2. Dogs go crazy to get rid of strange smells and scents

You probably know this, but dogs like the smelly stuff. If there’s something smelly, they will roll it. My dog loves rolling in fox poop, does yours?

So, when you bathe them with all that dog-friendly shampoo it’s going to get rid of all the smells they like, replacing it with scents they probably don’t!

It’s no wonder they then run around like mad! They want these new nice smells to go, and the old stinky smells to come back!

3. Dogs go crazy with relief if they hate baths

My friend said this to me when I said I was writing this article.

“My dog hates me after bath time, she goes crazy, acts aggressive, runs around, then looks depressed afterwards.”

I can only think then, that for this dog, going crazy and mad after a bath is to help release nervous energy after being washed. Not all dogs like baths, so in this case it could be that the dog is so relieved afterwards she needs to run about like mad.

When you see a classic case of the zoomies with lots of playful elements added, it could be that your dog associates getting wet with water with play. Most dogs encounter water like this outdoors, and typically in a fun environment.

That could be water play in the garden, a day at the beach, or being squirted with a hose. Getting in the bath could give them that same association, perhaps bringing them joy.

If that’s the case with your pup, it’s no wonder your dog goes crazy after getting wet at bath time.

Handy Hint: What is it about mud that dogs love so much they want to lay and roll about in it so much?

5. Dogs go crazy because of the way you react

Dogs are very simple creatures. They want to please us humans, and there’s even some suggestion they might consider us to be their parents.

What do young kids like to do (most of the time anyway)? That’s right; please their parents.

And that’s why some dogs might go mad after having baths… because you’ve reacted in a way they think is fun at a bath before.

Let me explain a bit better. Perhaps when your dog was a puppy and you have them their first bath, they leapt out, started shaking, and then ran off as you tried to catch them.

Your dog now associates bath times with fun chasing games like this. It’s no wonder they get the zoomies after a bath is it?

Here’s what a dog could be thinking:

“Well, I did the mad running about last time and all the humans started laughing and shouting. They then chased me, it was great fun, so let’s do it again!”

Is it dangerous for dogs to go mad after a bath?

Almost all dogs get the zoomies. Puppies are the most notorious for it. What you will notice is that they can run around like mad, jumping of the bed and nearly bouncing into walls, but they never seem to hit anything.

That doesn’t mean they can’t injure themselves when they run like crazy, but most dogs seem to have an awareness of the space around them to not get hurt.

However, do keep an eye out. Here’s what the professor I quoted earlier says when he was asked whether it was safe for dogs to have the zoomies indoors:

“My answer is always something like, yep, as long as you’re sure that she or he won’t harm themselves or others and it’s done in a safe area. And it’s essential for a human to know their dog and to remain alert when either the dog or other individuals are in the path of a frapper fugue and potentially can be harmed.” (view source)

With regards zoomies being a potential health concern, here’s what the American Kennel Club say about them:

“Zoomies are a natural dog behavior that is most often no cause for alarm, so long as your pup has room to run without injuring themselves. However, constant zoomies may be a sign of a larger behavioral problem, so it’s a good idea to keep tabs on how often your dog is zooming and for what reasons.” (view source)

My dog is depressed after a bath

If you are seeing depression and even aggression after a bath, it has to be that the frenetic behavior is related to stress. If that is the case, perhaps baths aren’t a good idea for your dog.

It’s perfectly normal dogs to run about like crazy after a bath. I’ve listed the most likely reasons why it happens, so it’s up to you to decide whether it’s due to fear or fun, then react accordingly.

It could be that you need to re-think how you bathe your dog!

If you need a bit of help with your dog at bath time, the following guides could help.