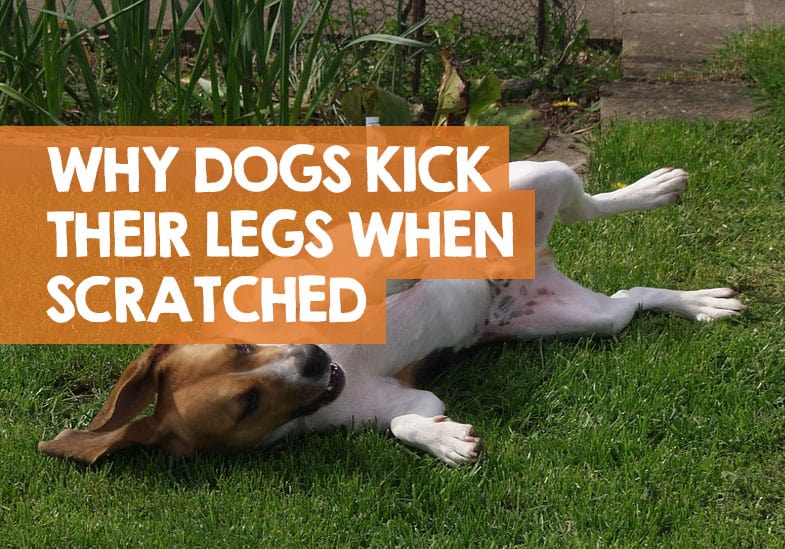 In most cases, dogs kick their back legs out like a bull after they have relieved themselves, sending patches of grass and dirt flying in all directions.

However, this back leg kicking trait is not just limited to peeing and pooping time and can be observed at other times. For example, scratching or tickling our dog’s bellies will usually send them into a foot-kicking frenzy, and it is no secret that the majority of dogs often kick their legs in their sleep.

But why do dogs kick their back legs when you scratch them? I decided to find out, and here’s the short answer first.

There’s a bit more to it than that though, as dogs kick their back legs for a plethora of different reasons, and if you are a dog owner, the chances are you will have seen this behavior many times before including when you scratch them.

Why do dogs kick their back legs like a bull?

With all this in mind, it is no surprise that the question as to why dogs kick their back legs like a bull is a big one for dog owners. If you look online, thousands of people are curious as to whether this strange trait is anything to worry about, or if it is just normal and innocent canine behavior.

Furthermore, there is growing evidence that dogs can start kicking their back legs randomly at any time in their lives, even if they have no prior history of it before.

This can come as a surprise to owners of older dogs, who may not be expecting their pooch to exhibit any new behavior in their old age.

In this guide I explain the reasons why so many canines demonstrate this back leg kicking trait and understand whether it is something you should be concerned about.

With this information, you will better understand why your dog is kicking its back legs.

Why do dogs kick their legs during belly rubs?

Dogs love attention, there is no doubt about that. From walks to playtime, dogs crave personal time with their owners. Nowhere is this more apparent than in belly rubs, with most dogs falling onto their backs to ask for a scratch at least a few times a week, if not more.

However, what often makes us laugh is our dog’s habit of kicking their back legs when we scratch a certain spot. The question is, why do they do this?

Thankfully, researchers have spent time studying this behavior and have figured out precisely what causes it. According to research, the involuntary response is designed to protect dogs from ticks, fleas, and other sources of irritation – and it’s named the scratch reflex.

Inside your dog’s belly lies a cluster of nerves, and when scratched in a certain way these nerves send a signal to the hind leg to kick (in an attempt to get rid of any bugs or objects that are causing the irritation).

This does not mean you need to stop scratching your dog’s belly entirely, as the sensation causes no pain, and most dogs love belly rubs regardless of whether their legs kick out or not.

If your dog is uncomfortable, it will get up and move away or let you know that it has had enough through body language. Dogs that are particularly comfortable with their owners will regularly roll onto their backs and show their bellies, hinting that they are fine with the sensation.

Interestingly, your dog’s scratch reflex can also be beneficial for your vet. For example, if your vet is unable to find this spot, then they can potentially diagnose that something is wrong with your pooch’s nervous system.

Additionally, you can also use this method to keep an eye on your dog’s health yourself. If you notice that your dog has stopped kicking its leg during belly rubs when it used to do it all the time, book an appointment with your vet as soon as possible.

Here’s a video of me scratching my dog’s belly and him kicking his back legs out.

Why do dogs kick their back legs out after pooping or peeing?

First and foremost, it should be mentioned that if your dog kicks the ground and grass up after relieving itself then it is quite normal. Although it might seem unusual at first glance, especially if your dog has never done it before, it is common behavior for canines.

Most dogs will kick their hind legs after going to the toilet, regardless of whether they have peed or pooped.

When it comes to the reason why your dog does this, it is related to scent marking. Although dogs pee and poop to relieve themselves, they also take advantage of the stinky odors to mark certain areas as their territories.

Although you might have formed the idea that your dog’s poop is the most potent scent marker, you would be wrong. Instead, it is your dog’s paws that are its most powerful tools for scent marking.

To understand this better, it is worth looking at how a dog’s scent works in the first place. Amazingly, dogs possess up to 300 million olfactory receptors in their noses, a staggering amount in comparison to our measly 6 million – this is why they are used by the police to detect drugs and firearms.

In addition to this, the area of their brains devoted to analyzing smells is, roughly, around 40 times greater than our own. Utilizing their incredible sense of smell, dogs and other canines are able to paint a vivid image of the world around them.

Therefore, whenever your pooch kicks its hind legs on the grass or dirt, it is leaving a scent or impression for other dogs to pick up on.

Furthermore, your dog’s paws are specifically designed to do this job as they feature glands that release powerful pheromones. These pheromones are then kicked and distributed around small areas of territory whenever your pooch drags or scratches its paws across the ground.

Dogs that regularly walk in the same spots will then detect this scent, likely choosing to stay away from that particular area.

What role does this play in pack behavior?

Although this behavior seems unnecessary to us, kicking out their back legs like this is still very much an important part of a dog’s life.

The majority of dogs no longer forage in the wild (instead, receiving regular meals from their doting owners), they still use scenting to claim their territory, as mentioned above.

In the past, dogs would use the glands in their paws to communicate with other canines in their pack, to indicate that a particular piece of food was theirs, or to warn competing packs that they were close by.

In modern-day times, alpha dogs do much the same thing, often scenting when they know rival packs of dogs are active in their territory. When dealing with alpha dogs that exhibit this trait, it is important to remember that they can become aggressive.

Handy Hint: Does your dog arch his back a lot? If so, and it happens aside from when he wakes up, it could possibly be a health issue.

However, it is worth noting that dogs of all roles will scent mark when given the opportunity, regardless of whether they are in a pack or not. At times, extremely submissive dogs will even mark as well, in an effort to communicate to dominant dogs that they are harmless and not a threat.

Thankfully, this is often enough to keep altercations from happening between submissive and dominant dogs.

What to do if your dog’s habit of kicking is destroying your yard?

Although dirt and grass kicking in dogs is harmless, it can quickly ruin your yard and other areas on your property if it gets out of control – as can urinating. This can be a nightmare for landscape gardeners or those who love their gardens and well-kept lawns. To help kick this habit (pun intended), you should try and aim to walk your dog at least 3 times a day.

Hopefully, with this extra time for doing its business, your dog will tear up the yard a lot less regularly.

You can also designate an area in your backyard for your pooch to use. Do this either through you taking the time to train them to pee in a new place yourself, or by hiring a professional.

If you decide to do this yourself, you should take your dog out in the yard with a leash to a preferred area for your dog to relieve themselves.

After walking around this area for a little while, your dog should eventually relieve itself. After they finished their business, reward them with a treat and extra playtime. After many repetitions, your pup should begin to favor this area and leave the rest of your yard alone.

Alternatively, if you are busy at work or unable to afford a dog trainer, try asking a friend or family member if they would take your pooch out for an extra walk. Asking friendly neighbors or people who you trust in the area can also work, as can researching cheap or free dog walking services.

All dogs kick their back legs when playing and being scratched. As an evolutionary trait, you won’t be able to stop them from doing it.

It’s a different reason for why they kick their legs out after a pee, so should not be something you need to worry about.

Dogs do the strangest of things. Here are some more guides.