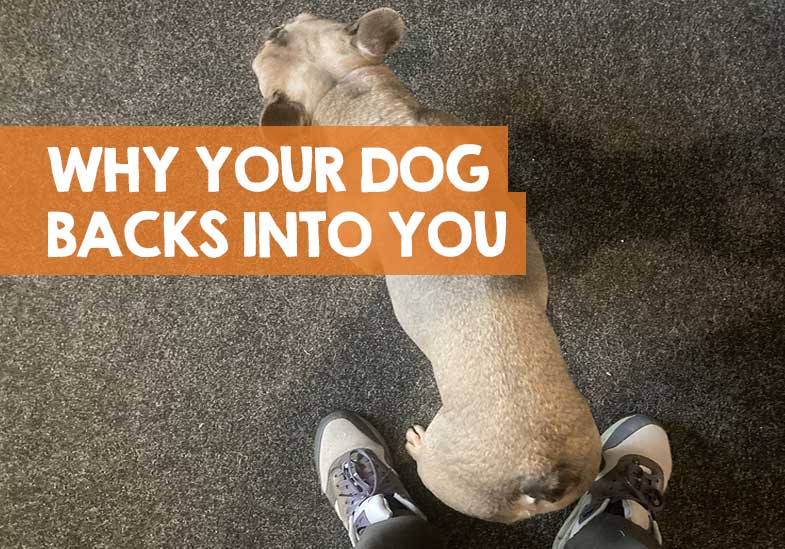 Does your dog turn his back on you whenever you sit down? Or does go backwards when you go for a walk and stop for a moment? Suddenly, he walks back to you, reversing with his bum backing into your legs?

You might even find your dog reversing in your friends when they come over. Weird isn’t it?

I’ve noticed it with our own mutt and researched the reasons. So, if you’ve ever wondered what it means when a dog backs up into you, or someone else’s dog reverses into you for that matter, I can explain

What does it mean when your dog backs into you? The most likely reason for a dog backing into you is because they trust you. Dogs reverse and back into people to be friendly and open, with no worries about being vulnerable. Dogs communicate by sniffing each other’s behinds. When a dog turns his back to you, he’s saying he’s open to communication.

There are other reasons too for the reversing, so check below so you can eliminate anything that could be problematic.

Why does my dog reverse into me?

Whilst it might seem like odd behavior, once you know the reasons for dogs rubbing their back into you, it all makes a lot of sense – despite such a stance making them vulnerable.

But the thing is, human and animal communication can get mixed up sometimes. When a human being shows their back to you, it’s often a sign of rejection. But when our dogs back into us to show their back, it’s easy to assume the same.

But, in fact it has an entirely different meaning and it’s a good one. Most of the times anyway!

To solve your wonderings for once and all, read on and find out why your dog or someone else’s dog is showing you their back and reversing into you.

Here are some of the reasons your dog could be rubbing his back to you. See if any of them are typical of your dog.

1. Your dog is greeting you

Observe any pack of dogs getting together at the local dog park. You’ll notice they spend a lot of time sniffing around each other’s bums. This is a typical behavior among dogs and what they’re doing is greeting each other.

The next time your dog backs into you or presents his rump to your friend at the front door, know he’s simply being social.

It’s one of the ways he greets others and if anything, it’s more puzzling for your dog when you don’t present your rear end to him! Or start sniffing him!

When your dog backs into you, he’s showing his vulnerability and trust in you. Some dog owners worry that their dog is trying to exert dominance over them. But instead, all they’re doing is telling you how much they trust you.

Handy Hint: If you are worried that your dog is backing into you to exert dominance you might want to check out these signs he doesn’t respect you as the alpha!

When you sit down and your dog turns around and shows you his back, know that he wants to be friendly. He knows you’ve “got his back” and he knows he’s safe.

When your dog backs into you know it’s a sign of how relaxed and chilled, he is with you. There’s no need for him to face you and bare his teeth!

3. Your dog wants a scratch

We’re used to seeing our dog lie down on their back, exposing their tummies for a rub and the legs start kicking out. But, did you know they’re also up for a scratch when they turn their backs on you?

This could be considered sneaky behavior by some, but all your dog is doing is saying, “Hey, give me a back scratch!”.

Dogs love a good scratch, and a rump scratch tops the chart for them. If you were rubbing his ears and he suddenly turns his back and reverses on you, know that he’s showing his preference for a back rub.

Handy Hint: Some dogs will also roll around on top of their toys to help them get to that hard to reach itchy spot.

4. Your dog is being protective

While this isn’t one of the most common reasons for your dog rubbing his back into you, I’ve noticed dogs doing it when they think their owner is in danger. The dog’s teeth are his weapons against any perceived danger.

If your dog thinks you’re facing a threat, he may back into you as a way of shielding you. The threat may seem minor to you, but your dog doesn’t think so.

So, if your dog does this and starts to growl or even bare his teeth, know that he’s picking up some danger. But he could also be doing this as a way of possessing you.

Should you worry about your dog backing into you ever?

A person who doesn’t understand how dogs communicate may tell you your dog is misbehaving whenever she turns her back on you.

This couldn’t be further from the truth.

All your dog is doing is finding ways to bond and build a close relationship with you.

However, there are times when you do need to do something about her backing into you or other people.

Stopping your dog backing into other people

Other people may feel unsure when your dog backs into them. This is especially true for people who are not naturally “doggie-people”. Dogs, especially larger breeds, can be intimidating and I know of people who understandably find it scary having a large mutt rear end them.

Handy Hint: Did you know that some dogs will act protective by urinating on a perceived threat!

What can you do to make your dog seem less intimidating to guests visiting your home or people walking in the park?

Well, you can consider bringing in an animal behaviorist. They will train your dog to use other ways of greeting people. This can include teaching them to sit when meeting someone and waiting for the other person to greet them.

How to deal with an over-protective dog

While it’s good to know your dog has your back, being overly protective of you can become a problem when they get attached to just one person like this.

Your dog may be protecting you against perceived dangers or he may even be stopping anyone get close to you because you’re his “object”.

When your dog backs into you and resorts to barking or growling at anyone coming close to you, you need to manage this behavior.

Once again, an animal behaviorist is the expert to call in. They’re trained to assist you and your dog to change bad habits. Your dog will learn that backing into you as a form of possessing you is not acceptable behavior. It might help to read my tips on how to assert dominance over dogs like this.

How to deal with constant doggy demands

Most times, we love to accommodate our dog’s demand for a back rub. However, when it becomes persistent and she does it at every opportunity, it can be a nuisance.

More so, when you have the in-laws over and you know mom doesn’t like having your dog reversing his backend in her face!

Dogs who’re constantly looking for attention can be distracted by using toys or playing a game with them. You could also do some positive reinforcement training to show them when it’s acceptable to ask for a back scratch.

Your other option would be to simply ignore her request or walk away.

Most times though, when your dog backs into you it’s because they adore and trust you. This behavior allows you to reciprocate the love by responding to his show of trust and vulnerability.

What better way to bond and form a close relationship with your dog then to give them a good rub on his back?

Even just stroking him as you sit and watch TV while he has his back to you creates a close bond between you and him. Dogs love to be close to their human friends. Backing into you is just one of the ways they can get this closeness.

Here are some more reasons to account for strange dog behaviors.