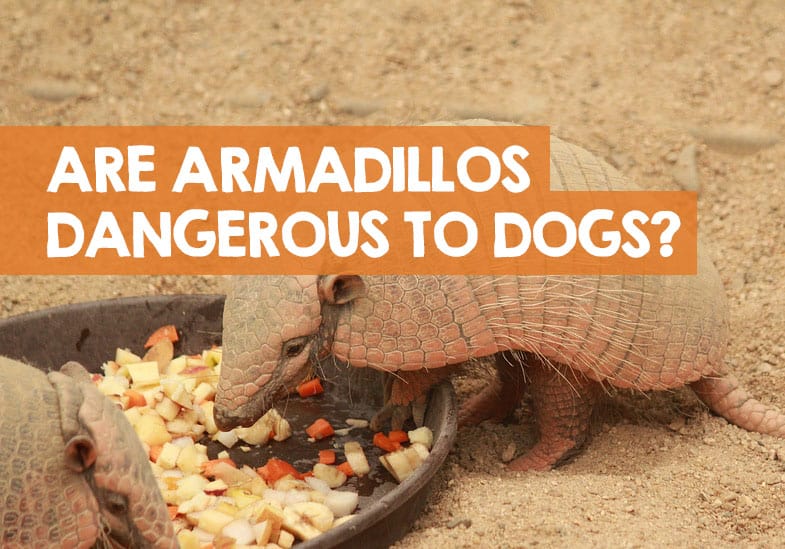 When I first set eyes on an armadillo, I couldn’t help but think how badass they look. There’s the body armor, sharp claws, and tail that looks like a sharp whip. It also made me think how dangerous an armadillo could be when encountered by a dog. Dog are curious, and don’t often see danger coming, so what is the truth?

I decided to do some research whether armadillos can hurt dogs and how dangerous they might be including poisoning risks from some nasty diseases. Here’s what I discovered; I hope you find it helpful.

Are armadillos dangerous to dogs? Armadillos can hurt dogs in certain circumstances, but generally speaking, armadillos are not dangerous to dogs. If cornered by a dog, they have sharp claws and can bite. They do carry disease, but the risk of transmission from armadillos to dogs is very low.

In simple terms, armadillos will try to avoid contact and conflict with dogs. They are wild animals and need to be treated with respect, so you should at least try to keep your dog away from them.

An armadillo is not poisonous or toxic to dogs but can transmit disease to canines in rare circumstances. I will explain those in more detail shortly. But, the biggest risk to your dog from an armadillo would be a bite or scratch from those very sharp claws.

Will an armadillo attack a dog?

There have been reported cases in the press where an armadillo has attacked a dog, but in every case, it was not an unprovoked attack. The encounter happened due to the dog chasing and attacking the armadillo and cornering it, so it had no option but to lash out.

The bottom line is, armadillos do not actively look to attack dogs, and would rather avoid them completely. Most of the time, they will turn tail and disappear when confronted by large pets.

But, please don’t be concerned. Only a very small percentage of armadillos have been found to carry rabies, so the risk here is very small.

What are the risks from a dog eating an armadillo?

Let’s say your dog caught and ate an armadillo, what are the risks, how dangerous is it, and what should you do?

Well, firstly, I’d recommend calling your vet. They will be able to offer advice, but from what I’ve gleaned on the web, there are a number of possible risks here relating to diseases listed below.

Tape worm could be a concern

Tape worms and other parasites could be the biggest danger to your dog when eating an armadillo. This is particularly risky for dogs that eat armadillo poop, as the dog could get sick from the parasite worms in the feces.

Another potential harm factor when eating armadillo poop is salmonella. It has been found to contain it and could make your dog very ill.

As already mentioned, rabies is a small risk as one of the diseases dogs can catch from armadillos.

If your dog had been bitten or scratched, make sure that their rabies vaccinations and boosters are up to date.

Handy Hint: I’ve published a recent guide which explains the dangers of dogs catching rabies from eating mice and other rodents.

The dangers of leprosy are minimal

You have probably heard in the new how armadillos carry leprosy. I find it hard to think of a more frightening and horrible disease.

But, it’s firstly not a highly a contagious disease, and the risk of transmission to humans is low as this quote below explains:

“The risk of transmission to humans is low. Only the nine-banded armadillo is known to carry the disease. And, most people in the U.S. who come down with the chronic bacterial disease get it from other people while traveling outside the country.” (view source)

As well as the dangers of this disease being very low, the cases in the US are very low too, as this additional quote bears testament to:

“Leprosy is a rare disease, and there are on average 50 to 100 cases in the United States every year, according to Doctor Sunil Joshi, president-elect of the Duval County Medical Society in Florida. Joshi said leprosy, much like tuberculosis, is spread through coughing and sneezing, but 95% of the human population is immune to the disease.” (view source)

But what about your dog, and how dangerous is an armadillo and leprosy transmission? Well, as far as your dog goes, it’s unlikely for a dog get leprosy from an armadillo. Leprosy is a disease that is species-specific, so the canine version of leprosy is unlikely to jump to an armadillo, and vice versa.

Dogs have a different strain of leprosy called canine leproid granuloma syndrome (CLGS). But even then, it’s still very uncommon, despite there being some reports of leprosy being reported in dogs.

Dogs that come into contact with armadillos will be fine, but you might want to be a bit more concerned if your dog has eaten armadillo meat. This is probably where the rare occasions of transmission would occur between species.

In conclusion, your dog is unlikely to catch leprosy from an armadillo, but you should still check in with your vet regardless how small the risk is.

In conclusion, armadillos can be dangerous to dogs, but like any wild animal, there’s usually a good reason why they will attack. You should keep the two animals as separate as possible to reduce risk.

If your dog comes into contact with armadillos you should not worry too much, unless one or both animals attack each other and lead to an injury in your dog.

Disclaimer: The information in this guide has been constructed from my own online research and should not be considered a substitute for expert veterinary advice. Always consult with a vet if you have any questions like the ones covered in this blog post.

I regularly write about the dangers dogs face from other animals and creatures, some of which you can find below: