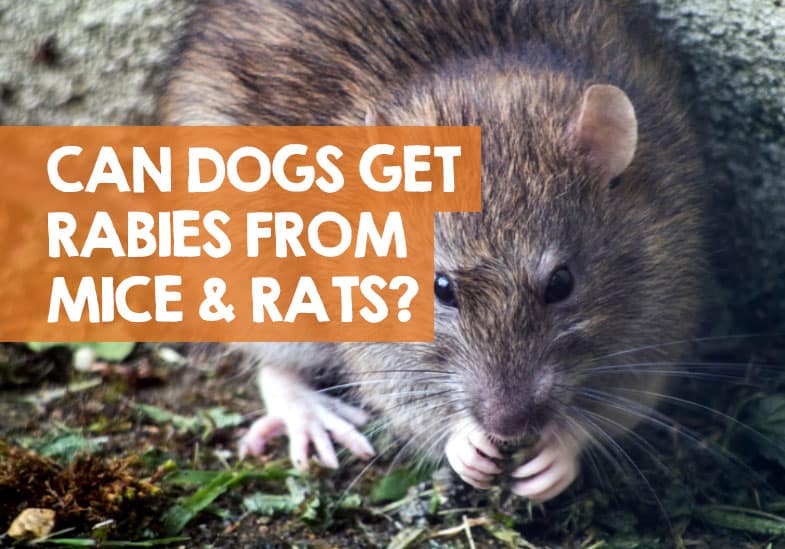 Dogs are curious creatures and will chase anything that moves including small rodents such as rats and mice. Whilst it’s unusual for dogs to be agile enough to catch a rat or mouse, when they do, they will often eat the rodent full or partially.

As owners this can be particularly alarming due the concerns over disease transmission. Rabies is one such disease that is often mentioned, and I’ve seen on web forums people claiming that it’s possible for dogs to get rabies from rats and mice.

Today I wanted to explain what the truth is about dogs being able to catch rabies from rodents such as mice and rats and how worried you should be. Here’s the short answer, followed by an in-depth explanation on what you should be concerned about instead.

But why is this?

Well, here’s the thing; scientists don’t really know why rats and mice don’t carry rabies, but there is a theory which makes a lot of sense. The theory goes that due to the size of rodents, they would not survive a bite from a rabid animal.

What this means is that if an animal with rabies was to bite a mice or rat, the rodent would die. The chances of survival are extremely slim; therefore, the mouse or rat will not be running about with rabies, and subsequently be able to infect a dog.

But then you might think that what if a rodent is killed by a rabid animal, and then the corpse if found by your dog and eaten – surely that way your dog will get rabies from a rat or mouse?

Handy Hint: It’s not possible for dogs to get rabies from tick bites. Click here to see the data behind a study that proved it to be impossible.

You would be mistaken again, because rabies is typically only transferred via a bite and saliva, and only lasts for seconds when outside of the body. Here are some facts about rabies which help paint the picture better.

If you need further confirmation on whether dogs can get rabies from mice and rats, lets me simply quote from the website of the Centers for Disease Control and Prevention (CDC) where they say:

“Rabies transmission from rats is not a concern. The U.S. Public Health Service does not recommend rabies vaccine shots for someone who has been bitten by a rat, and about 50,000 people are bitten by rats each year in the U.S.”

Can dogs get rabies from eating rats?

In terms of dogs catching, killing, and then eating rats, the government advice is the same. Dogs cannot get rabies from eating rats.

As already mentioned, nobody is 100% certain why rodents don’t carry the disease, but that doesn’t mean it’s safe for dogs to eat rats – there are other risks they can encounter with this disgusting habit.

Handy Hint: You might be worried about your dog getting rabies from licking a dead animal, please don’t be, as this is unlikely to pass the disease according to my research.

What can dogs catch from rats?

Whilst dogs cannot catch rabies from rats or mice, there are some very nasty things they can get ill with. Here’s a list of just some of those diseases and ailments, meaning you should try to keep your dog away from them – particularly if your dog like to chase them:

These diseases and illness can be transmitted via bites from rodents, your dog eating them or their feces, drinking infected wate, or being in close proximity.

Handy Hint: Here are the 6 best breed of dog that will hunt, catch, and kill rats on your property.

What animals do carry rabies?

Whilst rabies is relatively rare in North America, USA, and Canada, and almost non-existent in the UK and Australia, there are still some animals who do carry the rabies virus.

The American Council on Science and Health say this on their website about the animals most likely to pass the rabies virus:

“The principal rabies hosts today are wild carnivores and bats. In the US, the most commonly reported rabid animal is the raccoon, followed by skunks and bats. Other common wild reservoirs of rabies are foxes and coyotes.”

Dogs and other domestic animals can also get rabies if they get bitten by one of the animals listed above.

“Small rodents like squirrels, hamsters, guinea pigs, gerbils, chipmunks, rats, and mice) and lagomorphs including rabbits and hares are almost never found to be infected with rabies and have not been known to transmit rabies to humans.”

This doesn’t mean that some rodents in North American can’t have rabies though, as the woodchuck (or groundhog) is susceptible to the disease. Referring to the CDC again, they say that:

“From 1990 through 1996, in areas of the country where raccoon rabies was enzootic, woodchucks (groundhogs) accounted for 93% of the 371 cases of rabies among rodents reported to CDC.”

My research found dogs can’t get rabies from mice, rats, and rodents. It was based on information I’ve compiled and presented back to you from authority organizations such as the CDC as at July 2020.

I would always encourage you to do your own research, as advice can change.

If your dog is bitten by a rat or you have any concerns about rabies, please consult with a vet immediately.