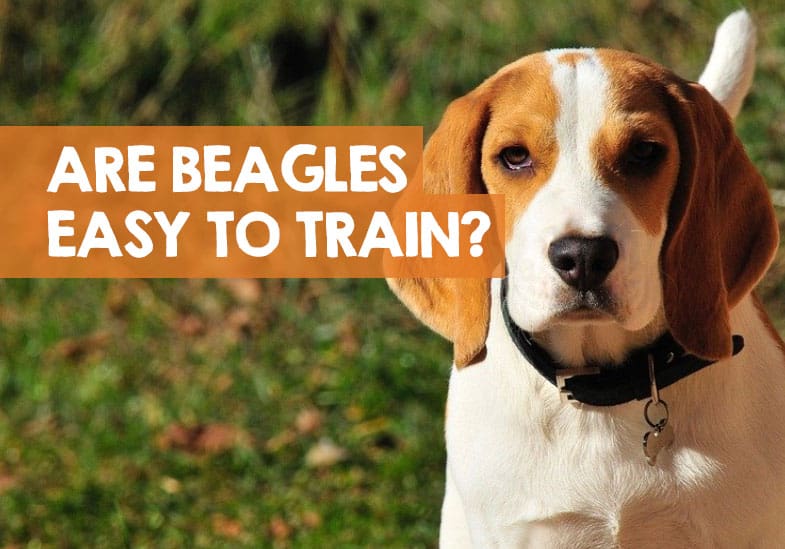 Given that they are often seen as the ideal family dog with their smart and eager-to-please nature, many people think that Beagles are easy to train compared to other breeds. And yes, they can be, but whether or not all Beagles are is another matter altogether.

In this short guide, I am going to explain why it’s either hard to train Beagles or easy; and how it depends on you, your dog, the environment they are in, and other developmental factors.

Are Beagles difficult to train?

Are Beagles easy to train? As a very broad generalization, I would say that as high-energy hound dogs who are disposed to shooting off when they sniff out potential prey, Beagles can sometimes be a little difficult to train and won’t be as easy as other breeds.

However, please don’t let that generalization put you off. All Beagles are different, so the answer isn’t black and white.

Whilst it’s important to remember that despite the Beagle breed having broad characteristics, every individual dog is different.

For example, whilst my own Beagle was easy to train, my cousin’s one was a lot more challenging. And this is despite them being from the same litter!

However, despite there being many factors that can impact a Beagle’s ability to train like their age, gender and individual temperament, we can get a broad idea about their training abilities when we consider their breed.

But difficult doesn’t mean impossible. In this article, we will explore some of the nuances of the Beagle breed that can impact their ability to train.

Are Beagles smart and easy to train?

There are certain factors regarding the Beagle breed which do have an impact on how easy or difficult they are to train. They are very smart dogs but can also be stubborn so let’s take a closer look at how their breed characteristics plays into training.

The impact being a scent hound has on training

Did you know that the nose of a Beagle is one of the most powerful noses in the world? Their noses have 220 million scent receptors, which makes them especially attuned to smells that our human noses don’t even pick up on!

Did You Know? Beagles have such big ears to help them sniff out scents… you can find out more about how their ears are designed for hunting here.

Although the modern Beagle isn’t used for foxhunting anymore, it is important to remember that the reason Beagles were originally bread was to use that nose to their hunting owners’ advantage.

They’re scent hounds, meaning that they are strongly influenced by their nose and are bred to spend their days tracking prey through smell.

Today, Beagles’ behaviour is still hugely influenced and guided by their nose. It’s incredibly instinctive to them, making it an influence that is incredibly hard to overcome.

A lot of Beagle owners note that their dog seems to lack focus when training them, but that couldn’t be further from the reality. Beagles do focus, just more on what their nose tells them rather than their exasperated trainers.

So, if you’re trying to teach your Beagle a trick and they’re shooting off in another direction, don’t feel bad – the likelihood is that they have caught a whiff of something and are acting in according to their instincts by tracking it.

Because they are almost entirely ruled by their noses, their recall can be less than reliable. A lot of Beagle owners note that when scent isn’t involved, their dog is perfectly obedient. The issue is that the Beagle’s instinct to track is incredibly difficult to overcome.

Did You Know? Due to the great sense of smell and ease or training, the police use Beagles to sniff out drugs.

The impact being hyper has on training

Another reason why your Beagle may seem to lack focus or discipline during training is because they haven’t expelled enough energy.

With their athletic build and genetic disposition for sprinting after things, Beagles need a pretty rigorous daily exercise regime to help keep their energy levels at bay. Not only do they need daily walks, they also need cardio at least twice a week to help satisfy their love for running.

Did You Know? Beagles can take a long time to calm down. Read what you can expect if your Beagle is hyper and you’re exasperated.

If Beagles don’t get the exercise they need, they tend to be hyperactive. A result of this is that they are difficult to train because they are more focussed on trying to expel their excess energy, meaning they are likely to run off mid-session.

This is why a lot of Beagle owners suggest that you get into the habit of training your dog after their daily exercise as opposed to before. They’ll be much more willing to focus, meaning that your chances of a successful training session will be higher.

A tired Beagle is easy to train compared to a manic one!

The impact a Beagle’s gender has on training

The gender of your Beagle can also influence their temperament and, by extension, their ability to respond to training.

If female Beagles have a litter, their personality changes and they may become less responsive and more difficult to train.

Being on heat can also disrupt training for both male and female Beagles, as it can cause them to get distracted and lose focus.

This is a factor in why a lot of Beagle owners choose to neuter their pets.

Once Beagles are neutered, the personality differences that set male and female apart become less pronounced, which in turn makes them more responsive to training and increases the likelihood of its success.

The impact a Beagle’s age has on training

Beagles are considered to be puppies up until they are around 18 months to 2 years old. Prior to their maturity to adulthood, Beagles are notorious for being hyperactive and difficult to control.

Furthermore, immature Beagles can struggle to self-regulate, meaning that they will keep going and going until their owner forces them to stop – therefore making them harder to train when younger.

As we have previously established, hyperactive Beagles are especially difficult to train, so it is probably easier to leave non-essential training like tricks until they reach adulthood.

Of course, potty training for any pet dog is unavoidable, so whilst it isn’t impossible train your Beagle puppy, you should accept that it will be considerably more challenging than training other breeds.

Handy Hint: For help with potty training a Beagle puppy, check out this step by step process.

Interestingly, the advice to train your Beagle at a later age is parallel to advice about other breeds, wherein it is important to train them as soon as possible. However, when it comes to Beagles, there is an exception to that rule.

If you become the owner of a rescued or rehomed Beagle, you might find that even as an adult they are difficult to train.

This is because they may have already learned certain patterns of behaviour from before they came into your life, which means that before they can learn new behaviours, they need to unlearn old ones.

As we have seen, various factors such as instincts, age, energy levels and gender all contribute to the question of whether Beagles are a challenging breed to train. Although there are certain issues that come with training a Beagle, it is nothing patience, resilience and a professional trainer can’t overcome.

The bottom line is this; it is hard to train Beagles BUT Beagles are easy to train depending on the circumstances!

If you’re into Beagles, check out these other articles that have been published this year: