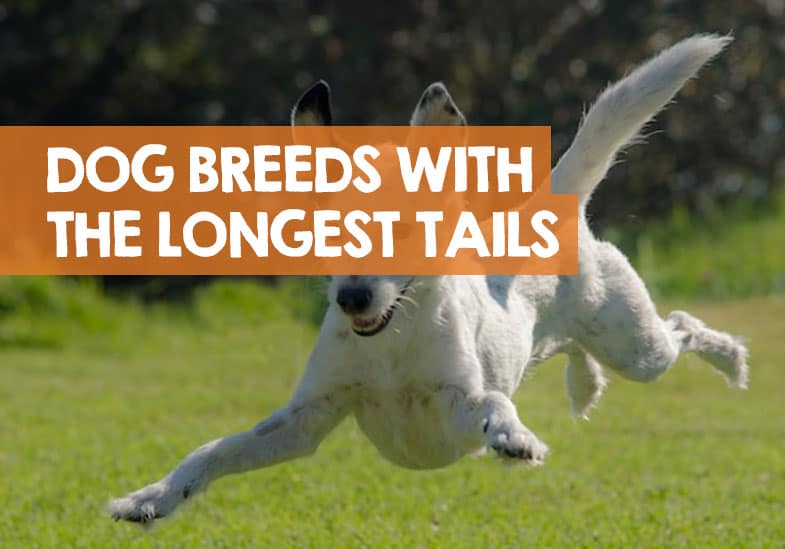 Dog breeds with long tails have both advantages and disadvantages. Tails are the windows to a dog’s soul. They are involuntary indicators of a dog’s thoughts and feelings.

Those with short or no tails are at a disadvantage and can be misjudged as stoic or aggressive, by both humans and others of their kind.

But which dog breeds have the longest tails on average?

Dogs with the longest tails

Large breeds with whip tails tend to be the world record holders as dogs with long tails. Their tails are long and thin and are designed for speed and agility. They are usually found on short-haired dogs, that have been bred for racing, or hunting in conditions where sight and speed are more important than scent and endurance.

The Guinness World Record for the dog with longest tail is currently held by Keon, an Irish Wolfhound, the tallest breed of dog in the world. His tail length measures 76.8 cm (30.2 in). The previous record holder was Finnegan, also an Irish Wolfhound, at 72.29 cm. Before him, Bentley, a Great Dane held the title, at 66.04 cm.

Doberman Pinschers fall into the category of dog breeds with the longest tails but routinely have their tails docked, for aesthetic purposes. This practice began when the breed was used to guard livestock. The long tail was prone to injury so was amputated to save the dog distress. A short tail has now become tradition for the breed.

German Shepherds have sword tails which are furry and heavier than whip tails. GSDs tend to allow their tails to hang down to conserve energy, giving them the appearance of having a low slung, shorter tail.

If a German Shepherd raises their tail, pay attention! These are potentially powerful attack dogs.

Irish Setters and Pointers are hunting dogs that use their long tails to point out their prey to their human working companions.

Otterhounds are rare, aquatic dogs that were bred to hunt otters. They have large and long, rounded tails that aid in swimming and manoeuvring their bodies while diving.

Huskies, St Bernards and other dogs designed for living in Arctic conditions, have deceptively long tails. They may not appear so because they are bushy, tightly wound and held high on their backs.

Their complete tail length can best be seen when the dogs sleep in cold conditions, as their tails are long enough to cover their noses.

Why have some dogs got longer tails?

Long tails are not useless afterthoughts or appendages that once had a function. They play a vital role in balance, steering and maintaining speed. The more robust the tail, the better equipped the dog will be for these pursuits.

Long tails, unfortunately, are more prone to exertion and injury. Hence some breeds that might have qualified for record breaking long tails, have had them docked.

The anatomy of a dog’s tail

Dogs’ tails vary according to their ancestry. They can be long or short, thin, or heavy, straight or curled. Wolves, the wild ancestors of domestic dogs, have tails that are approximately half the length of their torsos, or one third of their overall length.

A dog’s tail is an extension of its spinal cord. Depending on the breed, there could be between 6 and 23 bones or vertebrae in the tail.

Like the rest of the spine, the bones are separated by cartilage, and held together with muscles and tendons. Blood vessels and nerves are also found in the tail so your dog will feel pain and possibly bleed or bruise from an injury there.

Some dogs are bred to not have long tails. Corgis, for example, have fatty deposits instead of bone.

Others routinely have their long tails docked. These are usually historically working dog breeds that have had them amputated to prevent injury. Examples are Doberman Pinschers and Jack Russell Terriers.

The position of the tail varies across breeds. Working dogs, and those that hunt by scent, tend to naturally hold their tails high on their backs. This helps with visibility in long grass and among livestock.

Sighthounds, or those built for hunting by sight and speed, have long, thin, low set tails. These breeds include wolfhounds, greyhounds and whippets.

Handy Hint: If your dog’s tail hair has started to fall out, you can try encouraging regrowth with these tips.

The benefits of dogs having long tails

How much is that doggy in the window? The one with the waggly tail? One of the chief functions of a dog’s tail is to communicate. This appendage can tell you much about your pet’s mood, so understanding these rear end signals is key to building rapport.

A wagging tail does not always mean that a dog is friendly. Apparently, wagging from right to left, presumably towards the middle, means a dog recognises you.

A tail held high, and rigid means the dog is on high alert. Tigger, the Dachshund at the local coffee shop, always greets visitors with a golf ball in his mouth and his tail in this position. His keen hope is that you will play fetch with him.

Hunting dogs, like Pointers and Setters, will adopt a similar stance when they have scented their prey.

Alpha dogs or natural leaders of the pack will also hold their tails in a high position. They are more likely to be approached by lesser ranking dogs, than to make the first move.

Submissive dogs will slink around with a tail held low or will roll over and expose its belly to an alpha, to indicate that it can in no way be considered a threat.

When meeting a strange dog, you have microseconds to figure this out, so it is best to practise decoding these signals on your own pooch.

Dogs with long tails are less likely to get into dog fights or to bite humans. The high visibility of their tails means that they are at an advantage with respect to intra species communications. It is also easier for people to read their body language and act appropriately.

Scientists have conducted experiments with short- and long-tailed robotic dogs and found that those with longer tails were treated with less suspicion by their flesh and blood counterparts.

Tails also play a more subtle role in spreading hormonal information about a dog. A wagging tail will spread the scent of the dog further afield, whereas a submissive dog will draw less attention to itself by keeping its tail, and its scent, close to its body.

When a dog is sitting it uses its tail as a counterbalance, though not to the same extent that a kangaroo would. The tail also provides stability when climbing and is used for balance and steering when the dog is running at speed. It helps to prevent the dog’s body from overcompensating when changing direction.

Dogs bred for speed, like whippets and greyhounds, have what is known as a whip tail. These are particularly long, relative to the dimensions of the body.

When swimming, dogs may use their tails as rudders while their paddling limbs propels them forward. Dogs that have been bred for swimming, live Retrievers and Otter Hounds have a relatively long, aptly named otter tail which is rounded, muscular and tapers towards the end.

Dogs, like Huskies, Alaskan Malamutes and other breeds associated with cold climates, have bushy, curved tails. These have been bred to be long enough to cover the dog’s nose when it sleeps outside in icy conditions.

Depending on the amount of curve in the tail, these could either be snap, curly or sickled tails. These tails appear shorter than they are due to their shape.

Disadvantages for dogs with the longest tails

There are two main disadvantages that dogs with long tails have, namely Limber Tail and Happy Tail.

Limber Tail results when a dog overworks its tail by excessive exercise, particularly swimming. This usually befalls dogs that have heavier tails, such as German Shepherds, Retrievers and Otterhounds, as well as busy hunting dogs, like Beagles.

An injured dog will hold its tail low and be reluctant to wag it. It may also chew at its tail to relieve the pain. Rest for a few days is recommended.

A Happy Tail is in effect a sad condition that can affect dogs with long tails. It occurs when a dog repeatedly wags its tail with too much force and causes injury to the tip by knocking it against hard surfaces.

Over time, the trauma causes an open wound, which bleeds profusely and is prone to infection. It is difficult to treat. How do you stop a dog from wagging? Often the only solution is to surgically remove most of the tail.

Working dogs, especially those that are used in livestock management, usually have their tails docked as a preventative measure. This prevents other animals from stepping on it, biting it or otherwise injuring it.

Some dogs have short tails, others are dogs with long tails that curl up.

Regardless of your dog’s tail length, it can tell other dogs a lot about them. That’s why dogs with the longest tails are easier for other dogs to read – as the long tail is a great communication tool.