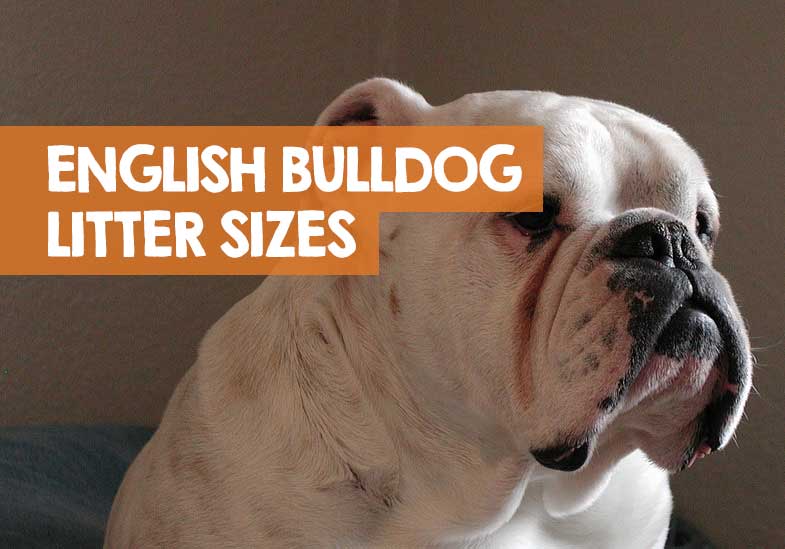 For the English Bulldog, the entire process of reproduction from conception to birth is a long, laborious and exceptionally difficult process. Every dog breed has a different experience with pregnancy, and English Bulldogs are not different.

English Bulldog puppies are probably one of the most expensive kinds of puppies to purchase, and although some breeders may consider the financial benefits worth it in the end, the difficulties associated with pregnancy and birth for English Bulldogs should not be overlooked.

Generally, a normal litter size for any dog is between two and ten, and several factors such as the breed, size and nutrition of a dog can have an impact on their litter. English Bulldog litter sizes are smaller than the average.

How many litters can an English Bulldog have?

Their average lifespan is smaller than that of other breeds – they generally live for up to eight years. And, with them becoming fertile around the six-month mark, it is probably advisable to spread the breeding process and pregnancies out throughout their lifetime.

If you’re looking to purchase an animal that can breed a large number of litters, then maybe the English Bulldog isn’t the right choice for you.

Did You Know? An English Bulldog will be pregnant for 63 days on average. If you think yours could be expecting, here are the pregnancy signs to look out for.

Why do English Bulldogs have such small litters?

To put it simply, the smaller the dogs, the smaller the litter. Bigger breeds such as German Shepherds and Golden Retrievers typically have litters of eight, and this is because they usually have much wider hips and a larger body.

This in turn means that they have larger wombs, which makes it easy for litters of up to eight to grow without any detriment to their development or their mother’s health.

Now, consider smaller breeds like Yorkshire Terriers (who, on average, have a litter of 3 puppies) and English Bulldogs. Their substantially smaller hips, bodies and wombs mean that they have nowhere near the same level of capacity than their larger canine counterparts to carry and allow for the healthy development of a such a large litter.

Can English Bulldogs get pregnant naturally?

Because English Bulldogs’ bodies are not made for pregnancy, it is not a case of just letting them mate with a male in order to get them pregnant. The only way that an English Bulldog can get pregnant is through artificial insemination.

Although this can be done at home, the success rate will be higher and the environment safer if you arrange for your vet to do this.

Whilst English Bulldogs can have 4 puppies on average, don’t think it’s made any easier by the small size of their litters.

Handy Hint: Here’s how you can tell if your English Bully is pregnant.

Can English Bulldogs give birth naturally?

Although English Bulldogs have the same gestation period (2 months) as other dogs, all female English Bulldogs will experience something called dystocia – which is a term used by vets to describe difficulties in giving birth.

Specifically, English Bulldogs have a condition known as dystocia due to foetal-pelvic disproportion. In general terms, what this means is that the birth canal of the mother dog is a lot smaller than the puppies they are expected to birth.

When it comes to English Bulldog pups, it is the abnormally large size of their head that is usually the issue.

As with anybody with a caesarean section, it is crucial that your English Bulldog has plenty of care, rest and regular check-ups following the procedure to ensure that they heal up properly.

This is why the recommended gap between pregnancies is longer for English Bulldogs than it may be for other breeds; at least a year is needed for them to recover from the previous C-section procedure.

Why are English Bulldog puppies so expensive?

Evidently, the entire pregnancy progress from conception to birth requires a lot of trips and procedures at the vets, which makes the resultant puppies a lot more expensive in order to make up for the bill racked up by breeders in order to bring them into the world.

The fact that English Bulldogs cannot conceive or give birth naturally also means that puppies of the same breed are exceptionally rare, which gives them a much higher value as a result.

Overall, both time and rarity contribute to the price of English Bulldog puppies.

Handy Hint: If you are thinking about getting this breed please read my top things to know before you buy an English Bulldog which includes questions to ask the breeder.

Now that we understand the complexities involved in breeding English Bulldogs, here are some do’s and don’ts if you plan on breeding your own puppies.

How can I tell if a breeder is not reputable?

With English Bulldogs being so expensive, there are unfortunately some opportunistic breeders in the world who will try and cut corners, harm the mother and breed her more than they’re supposed to in order to gain the monetary reward of a rare puppy.

Breeders such as this can be difficult to spot, but if you get a strange gut feeling about something, it is better to be safe than sorry.

So, here are some signs that you might be dealing with a dodgy breeder:

If any of the above signs apply to the potential breeder you’re looking into, chances are they might be running a puppy farm. It is best to not let them know you know because then they might move away and risk capture. Stay calm, keep a cool head and call the RSPCA or the animal welfare charity that serves your country as soon as you leave.

Handy Hint: Know when your English Bulldog is due her heat cycle is key to planning wanted or un-wanted pregnancies. Read my guide to the heat cycle of this breed, how long it takes, and what signs to look out for.

English Bulldogs are a wonderful breed, but their journey into the world is far from simple.

If you want to breed English Bulldog puppies, this is not a task that should be undertaken lightly. You need to research, consult your vet and have plenty of money for medical expenses.

If you already own this breed, here are some other help articles you might find of interest: