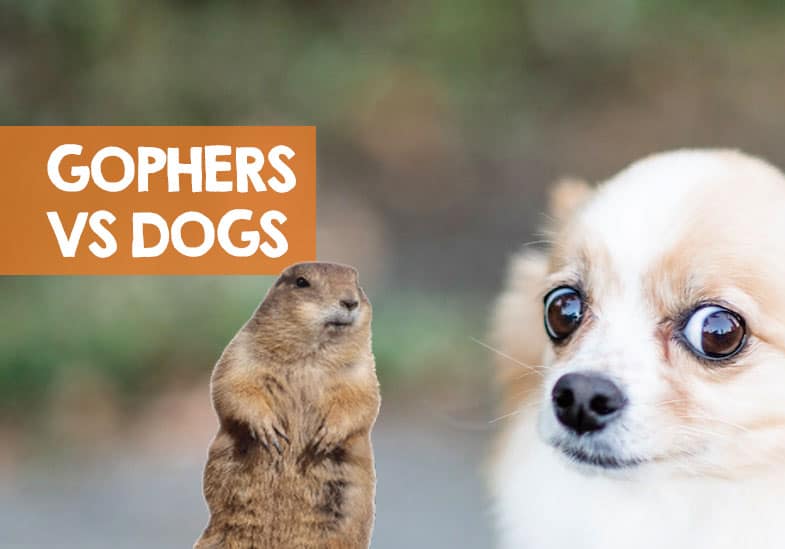 Gophers are the scourge of many backyards, and for dog owners, seeing the presence of gopher holes might cause you concern. For example, if your dog has free run of your yard, you could worry that gophers dangerous to dogs, possibly attacking them. One person contacted me who was even worried that a gopher can kill a dog.

So, what is the truth about dogs and gophers?

Will a gopher attack a dog?

There are many aggressive critters that might come into your yard, but gophers aren’t one of them. Rarely will you hear a gopher has attacked a dog, a definitely not kill a dog.

But that doesn’t mean it never happens.

Just like every other prey, a gopher will feel the need to act in self-defense if cornered or provoked by a dog – and could lash out and hurt your dog in case like this.

Does that mean gophers are dangerous to dogs? Not really, unless your dog has cornered one, and gets a nasty scratch or bite.

Of course, there’s no way a gopher can defeat and kill a dog. But a prey has got to try, you know.

Dogs will eat gophers if they manage to catch one. Most dogs will stop at nothing to catch a gopher. They will try to burrow into the gopher’s tunnel to win themself a free delicacy. Yes, dogs find gopher meat tasty!

If a gopher feels threatened by a dog while hiding in its tunnel, it will put its self-defense skills into use: scratching and biting.

Gophers have very sharp teeth and claws, hence their exceptional digging skills. Plus, the mere fact that these small critters tear down tough plant roots and stems says a lot about how sharp their teeth are.

A dog burrowing in the gopher’s tunnel can get bitten or scratched.

But attacking is often a gopher’s last option. They mostly scratch or bite if they feel that’s the only way to make the dog go away.

And bearing in mind how sharp a gopher’s natural “self-defense weapons” are, your dog may end up with a serious wound from the gopher’s bite or scratch.

But why would a gopher dare make themselves comfortable in a home with a dog?

Well, if your yard has the loose soil, and you have a vegetable garden, a luscious lawn, or a thriving flower bed, you basically own a gopher’s paradise!

These annoying critters are purely herbivores. They love to eat anything plant-like — flowers, vegetables, grass, you name it!

So even if you own a dog but your outdoor space has all these dinner-worthy plants, digging tunnels in your compound is a risk a gopher might be willing to take.

Are gophers scared of dogs?

The short answer is yes, gophers are scared of dogs. Gophers are afraid of dogs since they view dogs as predators. Dogs know gophers fear them, which is why a dog will boldly go after a gopher if they see one.

They seem like harmless creatures in pictures, until they take over your property. They will mercilessly burrow in your well-manicured lawn, fill your yard with ugly mounds of soil, and eat up plants you’ve worked so hard to grow in your garden.

Dogs also can’t stand gophers. They see gophers as a threat to their territory, so they will do whatever it takes to get rid of them — including chase-to-kill. Even dogs with low prey drives will run after them.

These medium-sized rodents (they resemble oversized rats) are naturally afraid of dogs. There are two main reasons behind this fear:

When a gopher sees a dog, it will flee and retreat to its safe haven — its burrowed tunnel. Confronting scary predators like dogs isn’t their thing.

Can dogs get sick from eating gophers?

Generally though, gopher meat isn’t unsafe for dogs provided the gopher was healthy before death.

When your dog catches a gopher, they will likely eat it. It’s normal for dogs to feast on dead gophers. After all, that’s their way of rewarding themselves for a successful hunt.

The problem is, it’s hard to find a dead gopher that’s completely healthy.

Like all other wild rodents, gophers carry external parasites which can pass on to your dog as they touch the dead body. And if the dead gopher had internal worms, your dog could get infected if they consume the meat.

Gophers also carry bacteria, such as E.coli, and Salmonella, which can make your dog ill if they eat the dead gopher.

Dogs aren’t that picky when it comes to sampling dead animals. If your dog comes across a gopher carcass during their walk, there’s a high chance they will dine on it. That’s a big problem because the gopher might have died of rodenticide poisoning.

What if a dog eats a poisoned gopher?

If your dog eats gopher meat contaminated with poison, they can suffer from secondary poisoning. The poison in the meat will wreak havoc in your dog’s body, leading to potentially fatal symptoms such as:

Getting rid of gophers in your home

Using poison bait is the easiest way to eliminate gophers in your compound. The poison often acts quickly, and the gopher will be dead within minutes after ingesting the poison.

But poisoning isn’t the safest way to get rid of these critters if you have a dog (and for the sake of your neighbors’ dogs). They can get a hold of the poisoned gopher and eat it.

Fortunately, there are a couple of easy ways to eliminate gophers naturally:

You simply place this ultrasonic repellant near the gopher’s holes.

How do you scare gophers away?

As noted earlier, you can use an ultrasonic gopher repellant, hang a plastic owl decoy, grow strong-smelling plants that gophers dislike, and apply repellants near the gopher holes.

Are gophers good for dogs?

Gopher meat isn’t necessarily toxic for dogs. But if the gopher dies of poisoning,  has a worm infection, or is carrying bacteria, eating such a gopher will pose a danger to your dog’s health.

Are gophers afraid of people?

Does dog poop get rid of gophers?