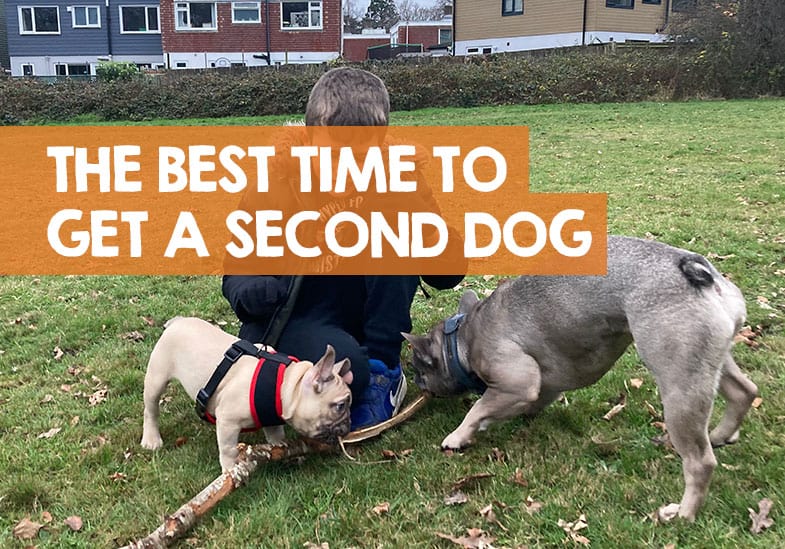 The joy that a single dog brings into a home is indescribable, which is why most dog owners will often find it hard to resist the idea of welcoming second dog into their home. If you’re smitten with the thought of having a second dog and wonder when you should get a second dog, my advice is below… and that of other people too.

Bear in mind, that only you will know if you’re ready for a second dog, but this might help you make that decision. Here’s my short overview answer first.

The best time to get another dog is when your current one is of the appropriate age and has fully mastered basic obedience commands. Besides that, there are other crucial factors that can determine if you’re ready for another round of dog parenthood or not.

Bringing home a second dog requires careful consideration as it could have huge implications for not just you, but also your current dog. There can also be risks in getting a second dog… all outline below.

When should I get a second dog?

They say the more, the merrier. But just how long should you wait to get a second dog?

I believe that when it comes to dog companionship, this overused phrase may relate a little too well with dog parents thinking of getting a second dog.

After all, dogs jazz up our lives in many ways. For most people, doing life with two dogs sort of means experiencing double uncomplicated love, double entertainment, double snuggles, and everything good in between.

Getting a second dog certainly has its benefits, and it’s easy to get lost in the fantasy of seeing your dog form a blissful friendship with their new dog sibling.

But like every other life-changing decision, adopting another pet requires you to weigh many things — including the best time to get a second dog.

I believe that you should only get a second dog if your current one is old enough (has crossed the puppyhood stage), has mastered all the basic obedience training commands, and has proper household etiquette.

Let’s take a closer look at these three key factors and other crucial questions you should ask yourself to see if you’re ready for a second dog:

1. Think about the age factor

If your current dog isn’t over a year old, don’t even think about getting a second dog — for your own sanity and that of your family.

A less-than-one-year-old dog hasn’t yet crossed the adulthood mark, so they still have a lot of growing up to do. You’ll have the hardest time managing your second dog’s needs and dealing with your sneaky troublemaker.

Most puppies begin to act calmer when they reach the maturity age, which is generally one year and above.

And if you have a senior dog, welcoming a puppy as the second dog isn’t a great idea.

Respecting boundaries doesn’t exist in a puppy’s world. These youngsters are full of boundless energy and will pester your senior dog with their playful antics.

Older dogs are chilled and find puppies annoying.  If you bring home a puppy when your current dog is a senior, the result will likely be a hostile living arrangement.

2. Is your current dog fully housetrained (and obeys all commands)?

You know what dogs aren’t good at? Teaching each other proper habits.

But guess what they thrive in? Imitating each other’s bad behaviors.

If your current dog still displays bad potty habits, it’s not the best time to get a second dog before you’ve fully house-trained them.  Otherwise, your new dog will pick on these habits thinking that leaving pee puddles everywhere is the norm in your home.

And if your dog is quite unruly — you know, often barks non-stop, ignores commands, chews everything on sight, and whatnot — don’t add another dog until you’ve successfully managed to train your dog out of these inappropriate behaviors.

3. Does your schedule allow you to get a second dog?

If you’re currently too busy that you hardly have time for your first dog, then it’s never the best time to get a second dog.

Most owners make the mistake of adding a second dog to be the other’s companion when they (the owners) are too engaged with other demanding responsibilities.

Getting a second dog to give your current one extra company isn’t an issue. The problem comes in if the second dog is your substitute — they’re taking your spot as the primary companionship giver to your other dog.

This will be unfair to your current dog and the new one since even though they’ll have each other, it’s not the same as spending quality time with their human best friend — you.

Plus, having a second dog means investing a lot of time in training, engaging them in socialization activities, and spending quality time together to help them adjust.

If you have engagements that are consuming much of your time away from your dog parenting responsibilities, that’s a cue that you aren’t ready for a second dog.

4. Will the second dog be compatible with your first dog?

Dogs are social animals by nature. That’s why most dogs eventually learn to live harmoniously with a dog sibling. However, your dog will be happier if they are compatible with the other dog.

If your dog would rather lay on the couch to soak up the sunbeam than spend their day running around, get a second dog that’s not too active. In short, it’s important to get a second dog with the same energy levels as your current dog.

You also need to carefully consider the size and gender aspects. If you already have a small dog, it isn’t a great idea to get a large-sized dog since your dog can easily get roughed up during playtime.

In addition, experts say that it’s best to pair your current dog with another of the opposite gender. Same-sex dogs tend to challenge each other and are likely to become rivals.

5. Does your dog have any behavioral or medical issue?

If your current dog is struggling with a pre-existing behavioral problem like separation anxiety adding another dog to the mix won’t cure their anxiety. A second dog will only offer your current dog temporary comfort.

It’s best to work on these issues with the help of a behaviorist before you can think of welcoming a second dog into your home.

And if your dog has a health condition that requires you to constantly devote your time caring for them, put your plans to get a second dog on hold.

6. Can you afford a second dog?

We can’t ignore the financial pressure of having a second dog — insurance, double vet bills, double dog food expenses, and extra pet sitting expenses, among others.

If you aren’t financially prepared to meet these needs, it’s better if you wait until things improve. Otherwise, you’ll end up financially overwhelmed raising your second dog and wish you waited a little longer.

7. Is everyone else okay with your decision?

If you’re living with your partner or a bigger family, whether you should get a second dog should be accepted by everyone.

A second dog means additional responsibilities that may require the other family member’s involvement — more poop to pick up, more hair to clean around the house, looking after two dogs, and more.

If you’re the only one thinking of welcoming a second dog, take a step back until everyone’s on the same page.

You wouldn’t want the new dog to feel neglected or the additional responsibilities to feel like an inconvenience to the rest of your family.

What I wish I knew before getting a second dog

And now just a little bit more of my personal experience. Some of this might sound obvious, but what I wish I knew before getting a second dog was just how much more hard work it is.

Friends said to me having two dogs is just like having one.

We got our second dog as an 8-week-old puppy when our older dog was 5 years old. I’d forgotten what it was like to have a puppy – all that house training, whining in the crate.

But that wasn’t the hardest part.

The tough part was the second dog is a completely different character to the oldest. Our oldest dog is chilled, takes it easy, and fits in around our life.

All these things I wish I’d known before getting the second dog.

But that’s the thing – you won’t know until you get him or her.

Handy Hint: Is it against the law to bury a dead dog in your own backyard?

FAQS on the risks of getting a second dog

Will my dog be happier with a second dog?

As discussed earlier, whether your dog will be happier with another dog mostly depends on how compatible they are with the second dog. My older dog does seem happier. He’s certainly more occupied and mentally stimulated since the second dog came into our home.

How much harder is to have 2 dogs?

Some people say it’s no harder to have 2 dogs over 1. I disagree. You have twice the poop, you have to walk two at a time, you have two dogs to clean and keep fit.

How do you know if you’re ready for a second dog?

You can know you’re ready for a second dog if you’re financially prepared, you’ve fully house-trained your dog, you’ve resolved your dog’s behavioral issues, and your schedule is flexible enough to train and spend quality time with your second dog.

Is it better to have dogs of the same gender?

As mentioned earlier, research says that dogs of the same gender don’t get along quite well. It’s better to have two dogs of the opposite gender.