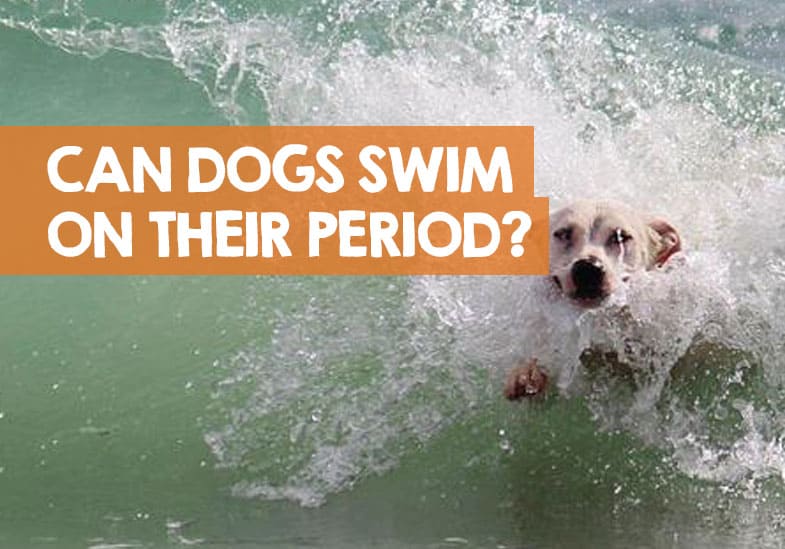 When your dog is on her period, she might a little more attention from you than normal. Some dogs will need comforting. Other dogs though will want to keep to their normal routine, but what if this involves your dog swimming while on heat?

Like me, you might have heard that a dog should not swim on her heat cycle. I’ve always wondered why people say this, and what is it about a dog being on her period that makes swimming out of bounds.

To find out, I checked to see what a vet says about dogs swimming on their periods, and here’s what I learned.

But what exactly does this mean, and how true is it? Well, there are multiple forum discussions online where some owners say this is an old wives’ tale, whereas other users say no, a dog should not go swimming on heat.

I prefer to err on the side of caution, which is why in this case, I don’t take a dog in heat swimming, but will instead seek alternative exercise that doesn’t involve water.

Here’s what the vet meant when they said they did not recommend a dog swim during their period season.

Why dogs should not go swimming when in heat

The rationale behind a dog’s health being at risk if they swim during heat is due to a perceived danger of a bacterial infection. The vet in question said the following on their website:

“To be safe I recommend an alternative form of exercise while your dog is in heat. it is unlikely that she is at an increased health risk during this time, however, the cervix is slightly more opened during this time of her cycle. The cervix is the gateway to the uterus and during all other times is firmly closed to prevent infection. Perhaps go for a long walk rather than a swim.”

What the vet is referring to here is a risk of developing a condition called pyometra. Owners will often say that the dog’s uterus is more open than usual during heat, and is therefore more at risk of bacteria entering through dirty water (or water that has not been treated with chlorine in a pool).

But what is the truth?

Pyometra is a secondary infection that happens when dogs go through hormonal changes when in season. After the estrus stage in heat, your dog’s hormone progesterone levels will remain high for a couple of months.

The uterus lining thickens as it readies itself for pregnancy. This results in an environment where bacteria can thrive. The muscles of the uterus also don’t contract as normal, so any bacteria that enters, can’t be expelled as easily.

You can read much more detail about this on the VCA website.

Now, when you think about the bacteria that might be found in open water, and how your female dog in heat might not be able to deal with bacteria as easily, you can understand the risk of swimming.

If your dog was to contract pyometra, most cases are treated with surgery.

Pyometra is serious and can be fatal to unaltered dogs. The womb will become full of pus and, if left untreated, will possibly lead to your dog having kidney failure, toxaemia, dehydration and, in some cases, death.

Handy Hint: These are the signs to look out for that tells you your dog is coming into heat.

Should you be worried about your dog swimming in heat?

Based on what I’ve found, you’re probably nervous now about letting your dog swim on her period. That’s understandable given what you’ve read.

But… every vet I saw online who spoke about dogs swimming in heat said the chance of catching pyometra this way is slim.

So, if you’ve just returned from a swim in a lake with your dog, please don’t worry. The only time you should is if you see her exhibiting any symptoms such as:

Symptoms of pyometra usually begin four to eight weeks after a season.

Can I shower my dog while she’s on her period?

Yes, you can shower your dog while she’s on her period. In fact, having a cooling (or warm) shower could help her feel more comfortable, particularly is she is suffering with cramps.

Just be careful to not scald her and only use pet-approved washing products that won’t irritate her skin.

Handy Hint: Here are 8 ways you can help to relieve your dog’s period cramps at home.

Can dogs swim during heat?

I also just wanted to touch upon a slight tangent, and that’s dogs swimming in heat, e.g. hot weather situations. Dogs can get sunburned just like we do. Some breeds don’t cope in hot weather, in particular flat-faced dogs. Based on that, they could easily be overcome by the heat, and tire out quickly when swimming, making them more susceptible to drowning. There’s also a danger of salt water poisoning, should they drink from the sea.

But of course, for some dogs, swimming to cool down might be just the thing they need. So, exercise caution and common sense.

Handy Hint: I did some research to find out how long dogs can hold their breath, here’s what I discovered.

Would I take my dog swimming when she was on her period?

Well, based on what I’ve discovered, I’d certainly reconsider it. However, from what I’ve gathered, the risks are relatively low so if you’re returning from a swim, please don’t worry, but do keep an eye on your dog’s health and behavior over the next 2 months.