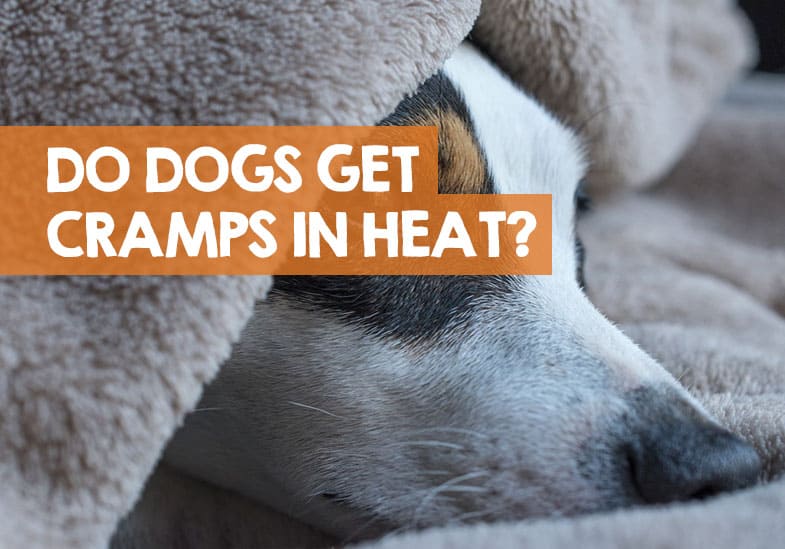 Most female dogs will come into their heat season a couple of times each year, but it can differ between breeds and the size of dog. For example, smaller dogs might come into heat three times year, and larger dogs just once. But one thing is common amongst all breeds and sizes, heat cramps.

As well dogs getting cramps when in season, they will also suffer with other common behaviors. These can include crying, possible constipation, what appears to be period cravings with increased (or decreased) hunger.

Below you can read more on how female dogs get cramps when they’re in heat, whether they will be in pain, how long the cramps will last, and some tips on comforting and caring for them during this time.

Do dogs get cramps when in heat (season period pain)

Now I’ve explained in brief that dogs do get cramps when in heat, here’s a brief primer about what them coming into season means…

We’re all familiar with the saying “it’s that time of the month” when referring to human menstrual cycles, and it’s not dissimilar for your dog when her heat cycle begins.

It is a little different though, as our female dogs won’t have a monthly period. Instead, they will go into heat season between 1 and 3 times a year depending on their size.

However, if it’s your first-time hearing about a dog’s heat cycle, I can almost hear you thinking, “what exactly does it mean when a dog is in heat?”

Well, here’s what it means:

In the simplest terms, the heat cycle (or the estrus cycle as experts call it) refers to a dog’s most fertile period. Their body goes through major hormonal changes in readiness for pregnancy.

When your female dog is in heat, it simply means there are highly sexually aroused and eager to mate with any male dog suitor.

This is the only time your furry friend can get pregnant. So, if your dog isn’t on heat, you don’t have to worry about them getting pregnant.

On average, dogs start undergoing the heat cycle when they turn six months (that’s when most pups enter puberty).

Then, they’ll experience heat every 6 months – or in other words, twice every year.

However, some large dog breeds, like Saint Bernard and the Great Danes, can have their cycle once each year.

It’s correct to say that female dogs go on heat throughout their lives. But this isn’t the case if they’re spayed: a medically-done procedure that permanently stops a female dog from going through heat and getting pregnant, ever.

Did You Know: Some female dogs will still bleed a little after being spayed.

Why dogs on their period get cramps

When a dog enters her fertile period, her body goes through drastic hormonal changes believed to be the cause of cramping during heat.

But the cramps female dogs in heat feel aren’t the same as how women feel during menstruation. That’s because of the difference in why female dogs get their period, and why women get theirs.

Periods in women mark the end of the fertile phase. The mature egg that left the ovary wasn’t fertilized as the uterus anticipated, so the uterus wall lining sheds because no fertilized egg attached itself to the lining.

So, the cramping and period blood in women is a result of the uterine lining doing its thing: contracting as it gets rid of the unfertilized egg.

With dogs, periods mark the beginning of the fertile phase. The dog’s uterine wall isn’t trying to get rid of anything. Instead, it’s simply preparing to receive the fertilized egg. This will trigger an increase in the main female dog hormones: estrogen, progesterone, and luteinizing hormone.

Because there’s a flood of these hormones, your dog gets cramps when in heat.

Will my dog be in pain when in heat?

The cramps dogs get in heat can cause discomfort, yes, but not intense pain because there aren’t painful uterine wall contractions involved — just the over-release of hormones.

That doesn’t mean your dog won’t howl and cry when in heat though!

What about the bleeding?

Generally, most female dogs in heat don’t bleed too much — the blood drips lightly. You’ll know your furry friend has started her heat cycle when they leave bloodstains on the floor or whatever they lay on.

If there’s heavy bleeding, it’s best if you take a trip to the vet.

The light bleeding comes from the leaking of the uterine blood vessels. Estrogen is notorious for triggering this leak when a dog is in heat.

Typically, bleeding lasts anywhere between 2-4 weeks. When it stops, it’s a sign a pooch is no longer in heat.

There are four stages associated with your female dog’s heat cycle:

This is the first phase and lasts roughly nine days. You’ll notice a bloody discharge from your pooch’s vagina and her vulva will appear swollen (like it’s protruding outwards).

You’ll also find her cleaning her vulva (through licking) more than usual.

The male dogs in your hood will smell the hormones from afar and know your canine friend is in heat. They’ll be many mating suitors looking for her.

But during this phase, your pooch will have zero interest in mating.

Now, this is where everything takes a turn. Your laid-back, “I don’t like hanging around male dogs” furry friend will be very open to mating any male that comes her way.

The flirting will be excess — for instance, you’ll observe her lifting her rear in any male’s direction or raising her leg when peeing. Their vulva will soften, and they’ll experience actual bleeding (not just discharge).

This phase also lasts for about nine days. Your dog’s chances of getting pregnant are highest in estrus stage.

Your dog’s body starts returning to normal because the heat cycle is ending. The flirting behaviors and interest in mating lessen significantly. This phase lasts for nearly two months.

This is the resting phase, where the mating interest completely disappears. Here, your dog is simply recovering from the whole heat process.

This phase lasts about four months.

Besides discharges, bleeding, vulva swelling, and excessive flirting when around other males, you’ll also notice the following telltale signs if your pooch is on heat:

What can I give my dog for period cramps?

When your dog has cramps in heat, there are some ways you can comfort her. Knowing how to care for your dog when in heat is important for four reasons. One, you’ll help them feel emotionally supported amidst the cramping discomforts.

Two, you’ll protect them from unwanted pregnancy. Three, you’ll keep them safe from aggressive male dogs (remember, they can smell when she’s on heat). And lastly, you’ll keep your home clean.

That said, here are some tips on what you can give a dog for period cramps – from a practical and emotional support level:

Handy Hint: Vets do not recommend that dogs go swimming while on their period.

Can dogs have cramps during their periods?

Will my dog be in pain when in heat?

When a dog is in heat, they mostly experience discomfort because of the hormones and cramps. Not intense pain though, and most dogs will be able to deal with their heat cramps, especially if you support them too.

Do dogs cry when in heat?

Female dogs can howl and cry when they are in heat. This is more common during the estrus section of the heat cycle, where crying is usually more pronounced and obvious.

You might notice howling, crying, whining, and moaning. It’s your dog’s mating call to tell all the local makes that she is ready.

To summarize, it’s perfectly normal for dogs to cry in heat.

How long does heat last in dogs?

Do dogs get constipated when in heat?

Yes, some dogs can get constipated when in heat due to the hormonal changes. Vets say this can cause changes to the GI tract, and then lead to constipation from the cramps of being in heat.

Are you a new parent to the cutest female dog ever? Or are you thinking of bringing a furry love of your life home? If any of these two sounds like you, you need to have the right information on their experiences when on heat, and how to deal with the cramps.

I hope this has given you the primer you need to help your dog during this time.