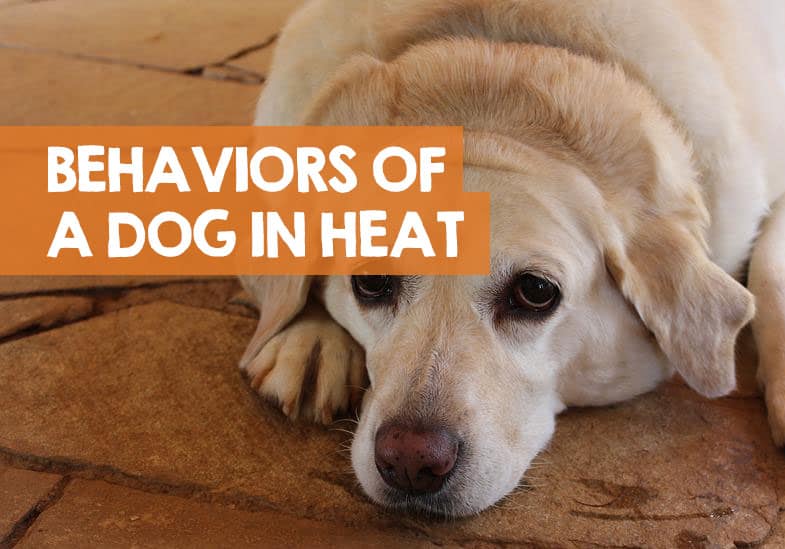 Unless your dog has been spayed, seeing your dog go into heat is something you simply can’t avoid. If you’re clueless about what to expect when your dog is in heat, then please do go through the following notes where I’ve listed the most common behaviors of a female dog in heat (before, during, and after).

In short though, what are the common behaviors of a female dog in heat? Well, a female dog that’s gone into heat will display unusual behaviors, from urinating frequently to sudden mood swings, over-grooming, and flirtatious tendencies, among many others. In short, when your canine friend enters heat, you’ll see a totally different side of them.

Keep scrolling as I highlight more odd behaviors to expect from your dog, and the reason behind these behavioral changes. I’ll also answer possible burning questions running through your mind about your dog’s heat cycle.

Common behaviors of a female dog in heat (before, during, after)

I doubt there’s any other statement that replays in the minds of most dog parents watching their female pooch go into heat if not, “She’s completely out of character!”

Seeing your dog have their first ever heat cycle may be one of your proudest moments as a new dog parent. That’s when reality finally hits that your furry bundle of joy isn’t so young anymore, and evidence of their sexual maturity unfolds right before your eyes.

On average, your canine friend’s heat symptoms will last for 2 to 4 weeks.  That said, here are the top 9 behaviors to watch out for when your female dog goes into heat:

When your dog is in heat, she’ll turn into the queen of excessive grooming. You won’t fail to notice this common behavior as she will start spending her sweet time licking her genital parts — even with all the bloody vaginal discharge going on down there.

They do this to clean up their genital area and ease the discomfort from their swollen vulva (their vulva becomes bigger when they are in heat).

Your well-behaved, sweetest, and ever bubbly pooch may suddenly transform into an irritatingly noisy and aggressive canine companion. Not the common behavior you really expected or wanted!

They’ll seem to have zero interest in anyone (including you) other than a potential mating suitor.

The hormonal imbalance in her body is to blame for these mood swings and aggressive tendencies.

When a female dog goes into heat, different pregnancy-related hormones flood her body. These hormones will make your pooch more irritable and anxious.

They’ll whine a lot, too. That’s your dog’s way of expressing her desire to find a mating partner. The whining can also be a result of her period cramp pain.

Handy Hint: Here’s how you can help your dog when she has painful period cramps.

3. Your dog will be overly affectionate

When your dog isn’t showing their moody side, they’ll be begging for your physical affection. They’ll want to be around you, hoping you’ll initiate a petting session that lasts several minutes.

Your dog probably knows that petting will help her communicate her “sexually available” status to the males.

You see, the more you pet your dog, the more you activate her pheromone glands. Pheromones are more like scented hormones that our canine friends release when being petted. Only fellow dogs can smell these pheromones, not us.

Since the pheromones’ scent is stronger when a dog is in heat, your canine queen will be happy to grab the males’ attention from afar!

Yes, it’s quite the behavior, I am sure you can agree!

When your dog enters heat, you’ll realize they’re taking potty breaks more than usual — even when their bladder isn’t full.

They’ll pee in different places, and in most cases, it will be a small amount of pee. You’ll notice this when you’re out together.

The regular potty trips are your dog’s way of alerting males nearby of her sexually active “mode”. She will also raise her leg when urinating near male dogs. She might even pee indoors.

A dog’s pee is more concentrated with pheromones during the heat season. So, when your furry friend pees, males will smell the pheromones and know where she is.

And that’s all your lovely canine friend wants when she goes into heat!

Flirting is another common behavior seen in female dogs on heat. Your dog will try too hard to let other males know she’s more than ready to mate. And she’ll not seem shy about it.

When you’re out on a walk, your furry friend will gladly allow any approaching male to sniff her and show her physical affection, like this dog here.

She will also push her tail to the side and direct her backside to any male she spots, as though trying to take on the mating position.

If breeding is nowhere near your priorities, have your pooch on a leash every time to ensure they don’t get down to business with a male near you.

When your canine friend enters heat, her mounting habits will be on another level.

She’ll want to mount on anyone and anything mountable. It’s not an uncommon behavior to see a female dog in heat try to mount the edge of your furniture, other household pets, your leg, you name it.

Even if you reach for the nearest rolled-up magazine each time to curb the inappropriate mounting, nothing much will change.

As long as they are in heat, your dog friend will go on a mounting spree to let you know they have a sexual urge which they desperately want to be fulfilled.

Expect your dog to pace up and down the house when on heat, looking for any slight opportunity to dash outside and meet the boys!

When she’s not gazing out the window most of the time, you’ll spot her lying near the door, waiting for anyone to open it so she’d be out in seconds.

If you don’t want your furry friend getting pregnant, ensure all possible escape routes in the house are shut.

8. She will refuse to eat

When your female dog goes into heat, you’ll notice a change in her normal eating behavior.

Her appetite will go down. Not because she’s sick, but because her mind is fixated on other important things — mating. You can offer her healthy treats regularly during this time to ensure she doesn’t go hungry for too long.

9. Changes in the body

OK, so this isn’t strictly a common behavior, but it’s still another sign your dog is going into heat, so worth being aware of.

More on heat behaviors and how the cycles work

A female dog’s first heat experience typically happens when they turn six months, and they’ll experience it for the rest of their life (twice a year, to be specific) if they’re not spayed. You will get used to the common behaviors of a female dog in heat, particularly before – you will get some early warnings for sure!

But back on track – by spaying, I mean having some of their reproductive organs removed to stop them from experiencing the heat cycle and getting pregnant.

Experts will often state that it’s best if this clinical procedure is done before a pup enters heat for the first time.

When your dog goes into heat, this is the only time when they can mate and reproduce. So, by nature, their level of sexual arousal will move from 0 to 100 during this fertile period.

Every single behavior you’ll observe when your dog is in heat is completely normal.

Your female dog isn’t intentionally trying to upset you, annoy you or make you gag. Her actions are beyond her control, and she’ll return to her usual self as soon as the heat phase is over.

Your dog’s heat cycle happens in four stages (in order):

When your female dog is in heat, it’s more evident in the estrus phase. That’s why “estrus” is often the medical term used to refer to a dog’s heat cycle.

How will my dog behave when in heat?

Your dog will behave strangely because of the hormonal imbalance in her body and the strong sexual urges she’s dealing with. Expect her to be moody, overly affectionate, display odd mounting behaviors, flirt a lot, urinate regularly, and refuse to eat.

Do dogs act different when in heat?

What are the 4 stages of a dog in heat?

You will notice changes in common behaviors when your female dog is in heat. Understanding them, and possibly giving her more support and comfort than normal, will get her through them.

Image in header via https://pixabay.com/photos/dog-animal-tired-out-labrador-fat-3953712/