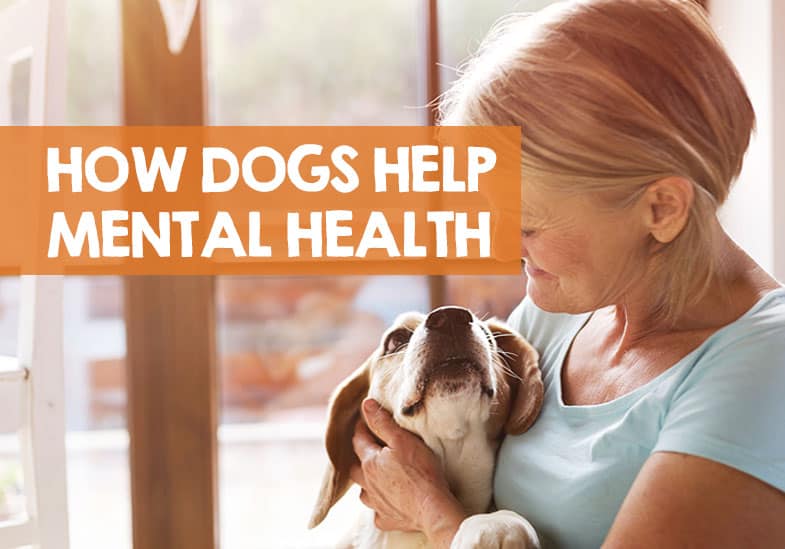 Many people will tell you that dogs can help with depression and anxiety; it makes a lot of sense. But just how true is this, and is there any science behind the claim? I decided to find out what research say about whether dogs do help your mental health or not. Here’s what I found out.

Can dogs help your mental health? There is ample evidence, both scientific and anecdotal, to suggest that dogs can improve your mental health. This is true of owning a dog, a brief encounter with one or by watching videos of cute dogs on social media.

But how exactly do dogs have an effect on our mental health, anxiety, and depression? Here’s what’s research has found.

How do dogs help your mental health?

Mental health has three aspects, namely emotional, psychological and social well-being. Studies have shown that friendly dogs can also generate a positive physiological outcome which has a knock-on effect toward improved mental health.

Dogs have even been known to alleviate the pain and reduce the distress associated with chronic illness.

There have been two studies and surveys published in recent years that suggest owning a dog can help with mental health.

A survey of 2,000 pet owners by The Human Animal Bond Research Institute (HABRI) in 2016 found that:

A study by the Cats Protection charity in 2019 also backed up these findings. Their published study showed that:

“In support of World Mental Health Day (10 Oct) a survey by Cats Protection shows that over nine out of ten cat owners (93.7%) state that owning a cat helps their mental health.”

I don’t think it’s too much of a leap of faith to think that dogs would have the same positive effects on an owner’s mental health as a cat would.

Why is having a dog good for mental health?

But why do we see these statistics around mental health and dog or pet ownership? Well, I believe it’s down to the following factors.

There is a growing movement of dog therapy programs. Research has shown that even the act of petting a friendly dog significantly lowers stress levels.

Therapy dog programs have been used in prisons, senior citizen facilities, university faculties, and to address anxiety and other issues in young children – here’s what makes a good therapy dog by the way.

A joint study, conducted more than 30 years ago, at the universities of Pennsylvania and Purdue, found that petting a friendly dog had the following effects on the research subjects.

Just the act of smiling or laughing at the antics of daft dogs on social media reduces anxiety and induces relaxation.

Owning a dog and even casual encounters with someone else’s pet can release dopamine, otherwise known as the ‘feel good’ hormone. Dopamine also induce a sense of adventure and confidence.

Serotonin levels also increase. These hormones are associated with celebration and reward, and raise one’s sense of social importance.

Pet owners benefit significantly from long term relationships with dogs. Oxytocin hormones produce a feeling of bonding and trust. These are principally released by touching, petting, cuddling and grooming.

Dogs have advantages over many other household pets. Many dog owners have experienced the benefits of regularly walking or running with their animals. This exercise regime improves fitness, reduces or helps maintain weight levels, and gets them out into nature and the fresh air.

Even in low levels of sunshine, a person’s skin can absorb the daily requirement of Vitamin D within 20 to 30 minutes.

There are strong indications that adequate levels of Vitamin D significantly increase a person’s immunity and overall ability to cope with life – it might also help dogs too.

During the extreme lockdown conditions associated with the global health crisis of 2020 and 2021, vast numbers of dog owners developed the healthy habit of getting out of the house, almost daily, to walk their dogs.

There was also a rise in ownership and demand for puppies, driven perhaps by people wanting an escape, comfort, and companionship that a dog can bring – which has to be a factor in improved mental health.

In fact, there was research to suggest this was indeed the case. In a November 2020 study the research abstract states:

“The recent need for people to stay at home led to uncertainty and severe health and economic concerns. Previous studies indicated that owning a companion animal, such as a dog or a cat, has benefits for good mental health. Interactions with animals may help with depression and anxiety, particularly under stress-prone conditions. Human–animal interactions may even improve peer-to-peer social relationships, as well as enhance feelings of respect, trust, and empathy between people.” (view source)

At the very least, a dog will not let you sit for long periods of time without moving due to their desire to exercise and get outdoors.

Dogs of all ages have the tendency to be carefree and to live in the moment. They have a positive attitude that is infectious, and appear to have no anxiety about the future or regrets about the past. We humans aspire to this spontaneous mindfulness.

Just thirty minutes in the company of a puppy or energetic dog will help us achieve this if we follow their lead.

Dogs are tireless, sensitive and attentive companions, who for the most part, are non-verbal. Their non-judgemental nature, and unconditional love and devotion are soothing balms for anyone experiencing emotional problems, such as rejection, anxiety and sadness.

You can see why having a dog is good for mental health when you consider those aspects.

A further example would be canine training programs in prisons. They have proven to be very successful in calming inmates with anger management problems. The process of bonding and caring for their foster dogs gives them an outlet for their pent-up energy.

Prisoners are also given a sense of purpose as the dogs ultimately become service dogs and the prisoners feel that they are contributing to society.

For people who are able or who need to leave the house on a regular basis, there is always the reassurance of a passionate welcome when they return home.

For people suffering from depression, dogs provide an opportunity to think beyond their problems. To some extent, a dog gives the owner a sense of purpose.  There is a reason to get out of bed each day – to feed the dog; and to leave the house – to exercise it and let it do its business.

Regular caring of a pet provides structure to a day, and a sense of being in control, however rudimentary. Caring for a dog leads to self-care. When the dog needs feeding, its owner might be encouraged to eat something as well.

Having to go outdoors could prompt the owner to dress appropriately and not spend the whole day in their pyjamas.

All the benefits discussed above are helpful for people trying to recover from substance abuse. A dog reduces the negative conditions that often cause addicts to seek solace in alcohol, drugs or risky behaviour.

Often addicts seek social interaction to combat loneliness. They frequent occasions and venues where alcohol is central to proceedings. Owning and caring for a dog can be an antidote.

A study conducted at John Hopkins University has found that there is a statistically significant decrease in the risk of schizophrenia developing in adults who have had dogs as pets during their childhood.

“Serious psychiatric disorders have been associated with alterations in the immune system linked to environmental exposures in early life, and since household pets are often among the first things with which children have close contact, it was logical for us to explore the possibilities of a connection between the two.” (view source)

Another conclusion drawn was that close physical contact with pets helps to improve immunity by reducing allergies and increasing resistance to animal bacteria and viruses.

Physical wellbeing translates into psychological wellbeing, or as the Roman poet Juvenal stated, ‘a healthy mind in a healthy body’.

Dogs provide opportunities for casual encounters and possibly longer-term friendships. Dog owners may chat to others while buying pet food, visiting the vet, walking the dog, and even online.

There are many social factors, peculiar to the last half-century, that have increased the demand for dog companions. Rapid urbanisation and the breakdown of extended families have decreased the number of social bonds people nurture.

Single person households and lengthy retirements are also fuelling demand for canine companionship. For most of the people who find themselves in these circumstances, the interaction with their dogs is their primary relationship.

An industry and a community have sprung up around the rescue of dogs. Even royalty and presidents-elect now have ‘rescue’ dogs. There is a social status attached to these mutts that was previously reserved only for the those with pampered and pedigreed pooches.

My aunt has three rescue dogs and I often wonder “Who rescued whom?” – they have done wonders for her mental health, and she’s the first to admit it.

Perhaps the importance of dogs in the lives of humans can be quantified in monetary terms. The ‘dog’ industry in the United States is projected to be worth $99 billion in 2020.  It is a growth industry in an economy of uncertainty.

Aside from the studies and research, I don’t think you would ever find a pet owner who would disagree that their dog isn’t good for their mental health.

On a personal level, my dog has brought me happiness, companionship, and got me off my backside with daily walks into the local forest.

All good things for the soul.