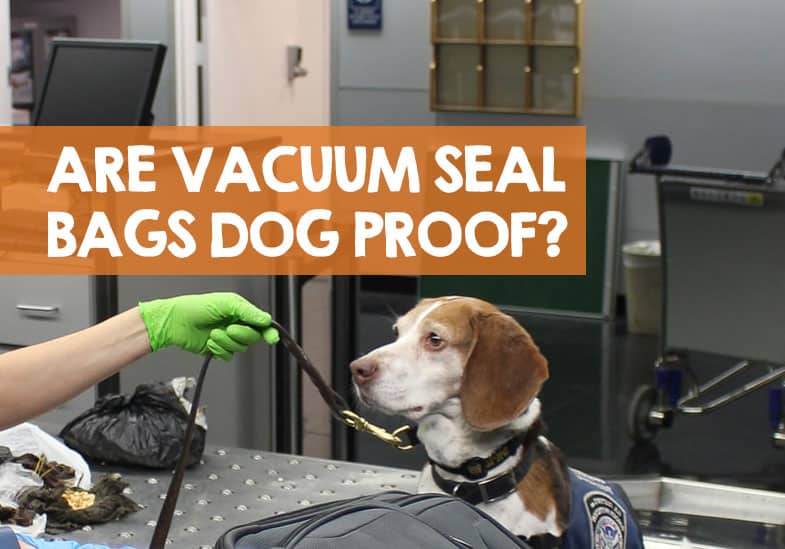 Dogs have been using their amazing sense of smell to help man for thousands of years. They started off as hunting dogs, and now use those same skills to support law enforcement in their efforts to prevent the trade in illegal drugs.

This amazing talent is all down to the 300 million olfactory receptors in their nose plus their ability to learn and be trained. Their sense of smell is said to be 10,000 times greater than a human’s, but even at that level of intensity, can dogs smell through vacuum seals?

It’s a fascinating topic, so I decided to investigate whether vacuum sealing eliminates odor enough to be able to fool drug sniffer dogs used the by the police, border force, customs, and airport officials. Here’s what I found out…

So, why can drug dogs detect smells in vacuum seal bags then?

It’s all down to a number of factors including how good the dog’s sense of smell is, how plastic is porous, cross contamination, and the ineffectiveness of criminals.

If you’ve ever wondered whether vacuum seal bags are dog proof, the answer is no. Here’s all the reasons why drug dogs can smell through vacuum seal bags, or at least will appear to be able to.

1. Smells can seep through plastic

Unlike glass, the plastics used in vacuum seal bags are porous with microscopic holes that smells can seep through. It doesn’t matter how well a bag has been vacuum sealed, the odors of the substance inside will eventually leak.

Whilst a human’s sense of smell would not be able to detect something that had been vacuum sealed, for a well-trained drug dog it’s not the case. In fact, I read an interview with a police officer who said vacuum sealed bags have breaches in them that are the equivalent to a fishing net to a dog’s sense of smell.

You might consider that police officers telling you vacuum seal bags are not dog proof is deliberate misinformation. However, research published in 2019 found they dogs can sniff out cancer in blood cells in plastic tubes.

If dogs can smell cancer cells, they are certain to be able to smell banned substances through vacuum seals – if the drug dog is trained to, it can smell what it’s looking for!

Did You Know? The only possible exception might be acid. LSD has no smell to it, but it still does get contaminated. Here’s how drug dogs can still detect this substance.

Unless the substances have been sealed in laboratory perfect conditions, drug dogs will be able to smell and detect on vacuum sealed bags.

It’s all down to the process of getting substances into vacuum packed bags. Before the drugs are put into the vacuum sealed bags, there is air in the bags. When the substance goes in, and the bag is vacuumed sealed, the air inside of the bag has to go somewhere.

That air is pushed out into the room so there will be trace scents in the atmosphere. Those scent molecules are then likely to settle on the exterior of the vacuum sealed bag, making them detectable by a  drug dog in the future.

Because of this, vacuum seal bags are not dog proof in the majority of cases… it’s almost impossible for scent to not settle on the bag’s exterior. This is particularly true when you consider that the vacuum sealing equipment is used in a room where there will be a large amount of illicit substances already that haven’t yet been sealed.

There’s also the consideration that same hands that put drugs in the vacuum seal bags are also the ones that handled the outsides of the bags afterwards.

You would also have to assume that anything placed into an airtight bag will have come into contact with the exterior of the bag at some point in time. That will leave microscopic scent traces that drug sniffer dogs can detect.

Cross contamination of scents is almost impossible to fool a drug dog with.

If you’re still in doubt that dogs can’t detect through vacuum seal bags, here’s a quote from a custom’s officer working at a US airport:

“Nothing can disguise the smell of narcotics; airport sniffer dogs have been trained for it. We have dogs who can detect a package of sealed drugs at the bottom of full 55-gallon barrel of gasoline.”

How dogs are trained to detect drugs

Now we know how hard it would be to make a vacuum sealed bag completely dog proof, I wanted to explain why drug dogs are so good at their job.

Well, aside from their insanely good sense of smell, they have been trained to make drug detection into a game that they just love to play.

Dogs can smell out and signal for anything they are trained to do. If police or airport wanted to train their sniffer dogs to smell for drugs in vacuum sealed bags it would require the following process:

In the training game, real drugs are used, but incredibly low amounts used in training due to their amazing sense of smell. Dogs are trained to locate the smell, sit down and point with their noise where it is.

According to police dog handlers and customs officials I have read interviews with, drug dogs are only trained to detect between two and five different substances.

Because of this, most of them will be trained to focus on the drugs and substances that are of the biggest concern to airports and police. That means things like amphetamines and explosives, and those considered to cause the greatest harm or have the biggest criminal element to them.

Dogs have been trained to smell for illicit substances and explosives for years and have an amazing reputation for doing so, supporting police and customs all over the world.

Many criminals believe that vacuum sealing a bag will be dog proof and eliminate odor. However, due to the way in which smell molecules can leak through plastic and the way in which the bags are sealed, this isn’t the case.

I love writing about the special talents that dogs have, with smell being just one awesome skill they have. Here are some other blog posts you might be interested in that cover similar topics to do with substance detection.

link to How Can You Tell If Your Dog Is Going Blind? (4 Signs of Blindness)

It’s a sad fact of life that dogs, just like their owners, will age and start to lose their youthful faculties. Loss of vision is a common complaint in older dogs, and it can be a gradual process...

Continue Reading
link to What Happens if My Dog Eats a Frog?

Last week I was walking the in the forest when my dog saw a frog jumping near a pond. His immediate reaction was to give chase. However, my dog isn’t the best catcher, so had no chance once the...