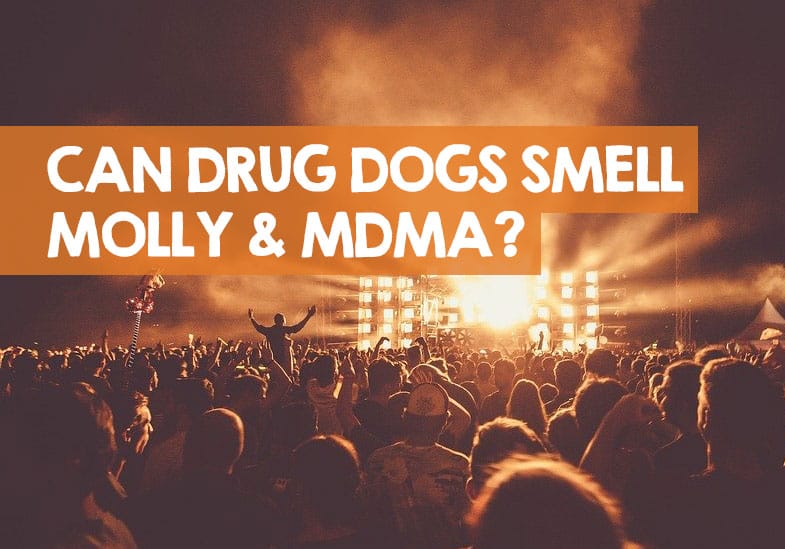 Dogs have 300 million olfactory receptors in their nose. This is what gives them such an amazing sense of smell, estimated to be 10,000 times more accurate than us humans. Their sense of smell coupled with being trainable, makes them a key tool in the arsenal of law enforcement. They are used by the police smell and sniff out drugs such as MDMA (aka molly) and other amphetamines.

You will often see crime fighting pooches working at airports, festivals, or with police handlers to help sniff out a wide range of narcotics. But given the variety of drugs in the modern world, can drug dogs smell molly, in particular MDMA and its derivatives?

To see what the truth is, I spent some time watching videos and reading articles by police handlers who work with sniffer dogs. It was interesting to see whether drug dogs can smell MDMA at airports and festivals, even if it’s been dissolved.

Here’s what I found out about police dogs and MDMA, and how they are trained to smell certain drugs.

Drug dogs can smell molly and MDMA, but whether the particular dog will have been trained to sniff out molly and alert the police handlers is another matter. Drug dogs are trained for specific smells such as explosives, narcotics, money, or even certain objects.

The bottom line is, police dogs can smell anything they have been trained to. For example, research published in 2019 found they dogs can accurately sniff out cancer in blood. If dogs can smell cancer cells, they can certainly smell MDMA and ecstasy substances.

Are drug dogs trained to smell for MDMA?

Most drug dogs used by the police or at airports will be able to smell molly. I read a transcribe of an interview with an American police dog handler who said the following:

“Our drug dogs can smell molly as it’s in the ecstasy MDMA class of controlled substances. Police and airport sniffer dogs are trained to stay ahead of illegal drug manufacturers who will often change the chemistry of drugs for concealment purposes. This means that since drugs like MDMA have derivatives sharing a common base, this base smell is what makes them similar to our dogs. As a result, MDMA, molly, and ecstasy type drugs have a readily identifiable olfactory signature that drug dogs can detect up even if you attempt to disguise it using other substances.”

The bottom line is, drug dogs will be trained for MDMA, and will be able to detect variations on the drug such as molly and ecstasy.

You will read countless reports and forums posts from people who haven’t been detected when carrying molly. The dogs are not 100% fool proof with sniffing out MDMA. But generally speaking, they are extremely good at it.

For example, the smell of MDMA is very potent, and humans can easily smell it when up close. Given that a dog’s sense of smell is thousands of times better than ours, unless the molly has been concealed very well, there’s every chance a police dog could smell it.

Even if the dog isn’t trained to smell for molly, it might still sniff out the MDMA as an unusual smell and alert the police handler.

“Nothing can disguise the smell of MDMA as the airport sniffer dog has been trained for it. We have dogs who can detect a wrap of cocaine at the bottom of full 55 gallon barrel of gasoline. They can even smell through vacuum sealed bags as the drugs will seep through microscopic holes in the plastic.”

Just like police dogs, if the airport drug dog has been trained to sniff and detect for amphetamines such as MDMA and ecstasy, then they will be able to smell for molly.

However, I read an interview with an airport worked in the United States who said that many of the dogs working at airports inside the US, were trained for explosives only.

How true this is, I don’t know, but it would mean that on domestic flights, dogs could only be trained to smell for explosives, but on international flights it would be very different.

Did You Know? LSD has no odor meaning it’s an illegal narcotic that police and drug dogs at customs are probably unable to smell?

Dogs can smell out and signal for anything they are trained to do. If police or airport wanted to train their sniffer dogs to smell for molly and ecstasy it would require the following process:

In the training game, actual real drugs are used, but incredibly low amounts used in training due to their amazing sense of smell. Dogs are trained to locate the smell, sit down and point with their noise where it is.

Did You Know? Beagles detect smells by using their big long ears. As their ears flap near the ground, they sweep up odor molecules to their nose, making them amazing as tracking and drug dogs.

Given that we now know that is it possible for dogs to be trained to smell for amphetamines, plus how powerful their sense of smell is, then of course they could smell dissolve MDMA.

The reason I believe sniffer dogs could smell MDMA that has been dissolved into a liquid is because they can separate odors that are mixed up together. For example, when a human smells stew, they just smell stew. When a dog smells stew, he can differentiate between the odors of all the ingredients mixed in together.

This shows the power of a dog’s sense of smell, so it stands to reason they would be able to smell dissolved MDMA even in water or alcohol. The same goes for ketamine if they have been trained to do so.

Handy Hint: There have been cases where drug dogs have been brought into American schools to smell for alcohol and beer.

Even those who are not trained as police dogs to sniff out molly, that doesn’t mean they won’t smell it, given how some can also alert on unusual odors.

link to What Can Dogs Drink Beside Water? (Safe Drinks Apart from Water)

Dogs will often drink things that they shouldn’t. Occasionally an owner might have to offer them something else to drink apart from water due to circumstance.Whatever your reason for wanting to...

Continue Reading
link to Why Do My Dog’s Farts Smell Like Rotten Eggs or Sulfur?

I guess we’ve all had those times when the dog let’s out a really rotten egg fart. They always seem to time it well too. Such as the time you were trying to impress your new in-laws, a dinner...