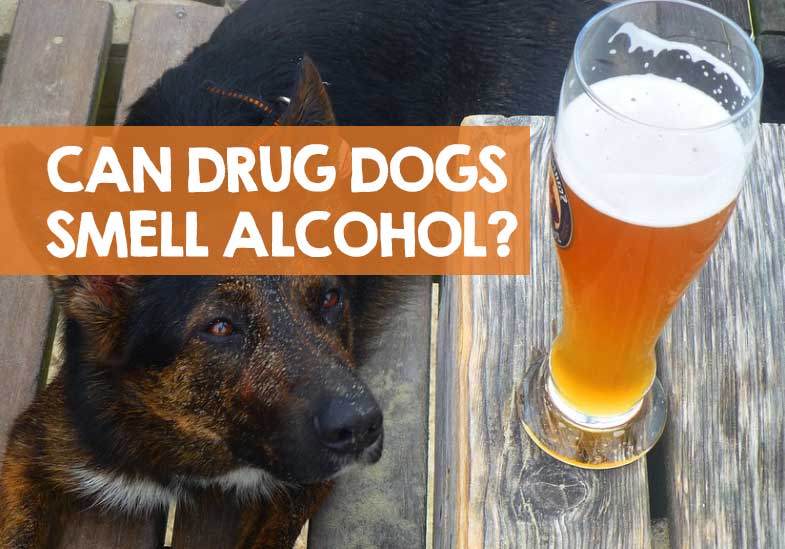 It’s common knowledge that dogs have an insanely good sense of smell. Inside their nose is said to be 300 million olfactory receptors, making them able to smell an estimated 10,000 times better than humans.

Along with their ability to be trained, this makes them excellent in helping law enforcement, police, airports, and even some schools now in smelling out illicit substances.

In the news over the last decade there have been reports of drug dogs going into schools to sniff out alcohol, drugs, and even weapons. But with regards to the detection of alcohol, just how good are drug dogs, and can they even smell beer?

I decided to find out by watching videos and reading articles by professionals who work with sniffer dogs. Here’s the short answer followed by more in-depth analysis.

For example, it’s not very common for police and airport authorities to train their drug dogs to smell for alcohol. They are instead trained to detect for illicit and illegal drugs such as cocaine, methamphetamines, and heroin.

You will commonly see crime fighting pooches working at airports, festivals, or with police handlers to help sniff out a wide range of narcotics.

But given the variety of drugs in the modern world, not many drug dogs are trained to smell for alcohol as it makes no financial sense to do so.

However, with some drug dogs now being taken into American schools, there are dog handling companies who work privately in the education sector, with alcohol detection being trained for.

The bottom line is, police and drug dogs can smell anything they have been trained to (typically the training might take 6 to 8 months). For example, research published in 2019 found they dogs can accurately sniff out cancer in blood.

If dogs can smell cancer cells, they can certainly smell alcohol; but might not be trained to alert their handler to it.

Are drug dogs trained to smell for alcohol and beer?

But whether drug dogs are trained for beer and alcohol is another matter.

The reason being, it takes effort to train a dog to detect substances, with patience and time needed until the dog consistently alerts to the drug or substance correctly.

There’s also the consideration that training a dog to smell alcohol is a potential waste of resources. Given the demand for certain drugs and their impact on society, it’s fair to assume that the majority of police sniffer dogs would be trained to smell for amphetamines, cocaine, and heroin.

Based on my research, I would conclude that it’s unlikely that most drug dogs have been trained to sniff out alcohol and beer.

However, there will be some that have been of course, particularly if being used by border and customs officers or inside of schools. But the vast majority of police and sniffer dogs, probably not.

Dogs have been used in schools to smell for alcohol

I found a news report on the LA Times from 2013 which explained how dogs trained to smell for alcohol were being used in surprise visits to schools in the Burbank area. The article is quoted as saying:

“The dogs are trained to pick up the scent of marijuana, cocaine, methamphetamines and ecstasy. They can also detect beer and liquor and prescription medications, such as Vicodin, Percocet and Oxycontin. The dogs also sniff out ammunition, firecrackers and pipe bombs.”

If they think alcohol is an unusual smell and out of place with what they are expecting, then they could signal on it.

Did You Know? Dogs have a such an amazing sense of smell that they are said to be able to sense when women have periods!

How drug dogs are trained to smell for alcohol and beer

Dogs can smell out and signal for anything they are trained to do. If police or airport wanted to train their sniffer dogs to smell for alcohol and beer it would require the following process: