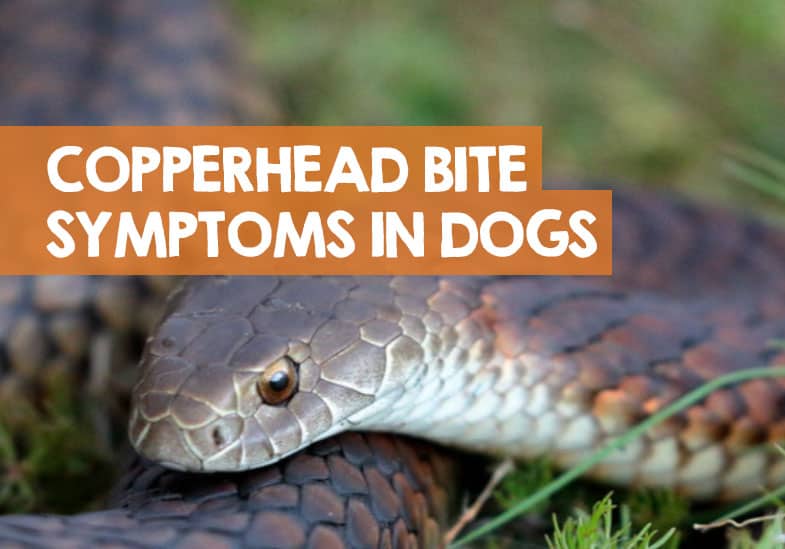 There are certain parts of the country where copperhead snakes inhabit, and for dog walkers this can present quite a hazard. In recent years there have been increases in copperhead sightings near residential areas which means you need to be extra cautious too.

It’s not always obvious at first when a dog gets bitten by a snake. So, how can you tell if your dog has been bitten by a copperhead, and what are the symptoms of copperhead bite in dogs?

I managed to get a fact file from a local vet, so have transcribed a lot of what I’ve read and been told into this guide to copperhead snake bite in dog symptoms. I hope you find it helpful.

Copperheads are very shy creatures and will usual slink off into the grass or bush as soon as they hear any noise of activity near them. However, due to the speed of dogs and their in-built prey drive, it’s not uncommon for them to corner a copperhead. The snake will then feel threatened and bite the dog.

Due to the mix of chemical compounds in their venom, the symptoms of copperhead bites in dogs can be very varied. Here are the signs to look for.

1. Two puncture wounds from the fangs

Immediately after a copperhead bite, there will be two small red dots on the skin about a centimetre apart. However, depending on where the bite was, and the hair of your dog, it might not be possible to see this particular copperhead bite symptom.

You might also see fluid or blood seeping from the bite marks.

2. Rapid swelling around the bite location

Very quickly after the bite, the wound will start to swell up, and will be a dark red colour compared to your dog’s skin in the minutes following the attack. After 2 hours it will be a noticeable bump on your dog’s skin.

This skin inflammation and bruising occurs as the venom starts to spread through the blood.

3. Change in your dog’s behavior

After a copperhead bite, your dog will be confused and nervous. People I know whose dogs have been bitten have immediately been alerted to the fact by their dog acting all skittish and weird.

If it was a bite to the leg, look out for them picking the leg up and hobbling or walking in a strange manner. If it’s a bite to the face, they might start pawing at it.

In very rare cases, there can be complications, including the following symptoms. This is unusual though as in most dog copperhead bites, they recover quickly providing they have had immediate veterinary attention.

Handy Hint: Did you know that the fatality statistics for dog copperhead bites are said to range from 1% to 10% dependent on many factors. Find out what those variables are here.

4. Very rare: Signs such as drooling, lethargy, and vomiting

Once the copperhead venom gets into your dog’s system you can start to see more obvious symptoms of a serious copperhead bite. In dogs, as well as the obvious signs of pain, some of these symptoms could also be related to other conditions.

The only way you will know will be to seek the professional advice of your vet, so if you suspect a copperhead bite, get to professional help immediately.

Panting is one of the more serious copperhead bites in dog symptoms. You will notice your dog having heavy breathing due to an allergic reaction to the copperhead venom, typically when bites occur on the head and neck.

Your dog’s heart rate could increase, and some will also show pale gums when breathing.

In the most serious of cases, and in the fatalities recorded, the copperhead venom absorbs into your dog’s body. It can lead to an inflammatory reaction which results in blood clots, fever, tremors, and an eventual collapse.

How do I know if my dog was bitten by a copperhead?

Aside from the symptoms of copperhead bites listed above, your dog’s behavior will also be a key indicator to whether they have been bitten.

In many cases you won’t even see the copperhead that bit your dog. The first sign your dog has been bitten by a copperhead will be a loud yelp and sudden movement from your four-legged friend, followed by limping.

Most copperhead bites in dogs are on the face or legs, so check those first if you believe your dog might have been bitten. You should look for two red dots, followed by swelling as described in the dog copperhead bite symptoms already mentioned.

What do you do if your dog gets bit by a copperhead?

What does a copperhead bite look like on a dog?

Aside from the two red dots, once the venom starts to spread, you will see visible swelling.

Can a dog survive a copperhead bite?

In the majority of cases, most dogs will survive copperhead bites.

Whether the dog survives the copperhead bite will depend on a range of factors including:

Whilst the signs of copperhead bites in dogs listed in this guide along with the symptoms do make for sobering and scary reading, bites are actually quite rare.

Most snakes will only ever bite when they feel cornered and in self-defence, so it’s up to us as owners to prevent this happening in the first place.

I regularly write about dogs and snakes, so you might find the following articles of interest: