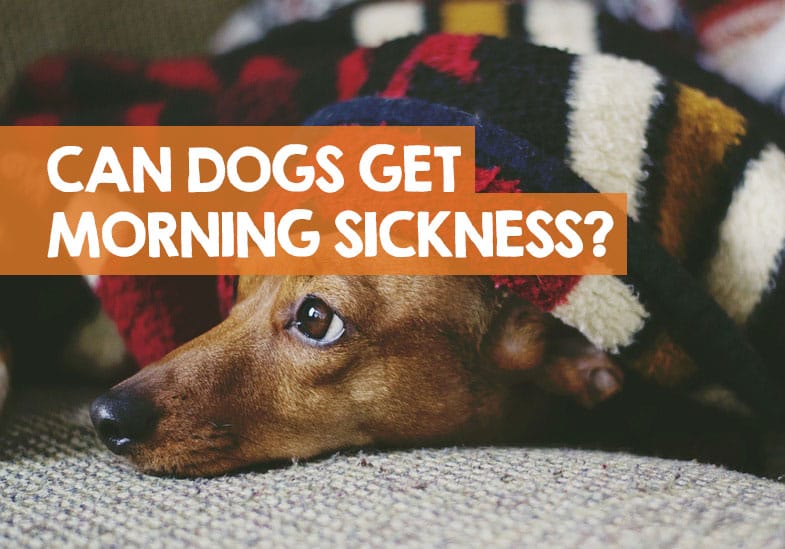 If you are breeding your dog for the first time, or just suspect she might have been impregnated, one question could be on your mind, and that’s morning sickness. If your dog is behaving strangely during pregnancy, it’s an understandable thing to consider, but is it fact that dogs can get pregnancy sickness?

However, morning sickness in dogs is possible without the dog actually being pregnant. It is not uncommon for a dog to have a phantom pregnancy and exhibit all the symptoms of a real pregnancy – you can read more about false pregnancy signs here.

If it is a real pregnancy though, you can usually tell how much morning sickness will effect your dog by considering how they deal with car journeys. Motion sickness is a good indicator of how your dog will respond to her body’s changes during pregnancy.

The bottom line is, if she has problems with car sickness, for example, the chances are that your dog will get morning sickness during pregnancy.

Dogs and morning sickness: the signs and science

Unless you are a seasoned breeder, your dog’s pregnancy could be a nerve-wracking experience. Mine was. I got the dates wrong and she seemed to be pregnant for ages. The vet made it worse by suggesting there could be more pups than there were.

When she started vomiting early on in the pregnancy, it didn’t even occur to me to think about morning sickness. Thankfully countless dog owners have been through this before and there is a vast amount of information available.

How dogs get morning sickness when pregnant

Far more studies have been done on humans than on dogs but indications are that the findings can be applied to both, and possibly to other mammals.

In humans, morning sickness occurs in the first trimester and is often one of the earliest indications of pregnancy. How many films have you seen where a healthy woman is inexplicably ill and those closest to her realise, before she does, that she is pregnant?

The cause of morning sickness is hormonal. The changes required by the body of a pregnant female to nurture its offspring in the womb are significant. The changes in the reproductive system have a knock-on effect to other systems in the body, such as food absorption and energy production.

It manifests itself in aversion to certain sights and smells, nausea and in the worst case, vomiting. In humans, around 70% of humans experience nausea, and 50% feel ill to the point of throwing up!

From these statistics, it can be assumed that a vast number of dog owners will understand what their dog is going through.

Signs of morning sickness in dogs

Although it is difficult to determine how a dog is feeling, conclusions can be made from observing their behaviour. As in humans, dogs that get morning sickness is one of the first signs of pregnancy.

Dogs have a gestation period of 61 to 63 days (around 9 weeks). Morning sickness will occur at the end of the first trimester, between 21 and 28 days.

Possible signs of morning sickness are:

Handy Hint: Don’t fall into the trap of thinking that your dog is too old to have morning sickness. Dogs as old as 10 years old can still become pregnant!

How to help a dog with morning sickness

None of these signs of morning sickness in a dog on their own will negatively affect the wellbeing of your pet so no major changes are required in her care.

With regards to food, perhaps try a variety of foods. More than her regular ration is not required and will probably not be appreciated at this stage.

Nausea and vomiting feel worse on an empty stomach, so feed her smaller meals, more often.

Keep it bland and simple. Rich food is not a good idea under normal circumstances, much less when her digestive system feels out of whack.

Moderate exercise is good for her body and stimulates the mind but let her rest as often as she wants to. There are major developments going on in her body, requiring much of her energy.

She needs to feel comfortable and secure. As far as possible, let her be near you, if that is what she wants. If she wants to be on her own, leave her to it and keep children and other pets away.

Make sure she has access to sufficient water to prevent dehydration.

When morning sickness in dogs should be a concern

If the morning sickness signs in your dog persist for significantly longer than a week, or appear to be affecting the dog’s health, for example she loses too much weight for her size, she will need an intervention.

During prolonged vomiting, she will lose body fluids which may cause a loss of electrolytes, such as sodium, calcium or potassium. This will cause problems in the nervous system.

Mild symptoms include twitching and tiredness but more severe indications are increased heart rate or arrhythmias, and seizures.

Other signs of pregnancy aside from morning sickness

Under normal circumstances, any morning sickness in your dog should disappear before the other indications of pregnancy become noticeable.

At around 30 days, her teats will start to change shape. The mammary glands are shaping up for feeding.

At five weeks, she will look like she is gaining weight. This would be the time to supplement her diet with nutrients that will help the pups to develop well. Extra proteins are good for both mom and pups’ long term health.

Another week later, her tummy will start to swell (you might even feel the puppies). Then the long wait begins!

If your dog is experiencing morning sickness and it’s not a phantom pregnancy, you are going to have some interesting months ahead. Here’s are some things to look out for!

Dogs have long memories. Any special treatment during her pregnancy could become the norm in her mind.

In most cases, dogs have no complications, either with the pregnancy or the birth. They probably have a better time of it than most humans.

However, it is not easy to sit on the side lines and watch it all unfold without some anxiety or dramatization.

When my aunt’s Jack Russell gave birth, the pups arrived in the dead of night, while snow was falling outside. Each birth was broadcast on social media soon after it happened. My aunt had to rest more than she did the next day.

It is probably better for your mental health, if you just let her get on with it. Even the most pampered first-time mother suddenly becomes an expert when the pups arrive.

A twist in the tail

Some dogs may display several of the symptoms mentioned above and not be pregnant. A common phenomenon among dogs is the phantom pregnancy.

The hormone reaction after a dog is in heat can be equally strong, whether or not she has been mated. She could exhibit all the signs of morning sickness as well as bodily changes, without being pregnant.

The hormone levels drop after 3-4 weeks and she could exhibit all the signs of a false labour, including milk production. She may become aggressive and guard a favourite toy as if it were a pup.  This is confusing for the dog, and no doubt for the owner, too.

Phantom pregnancies could occur each time the dog is in heat. Therefore, unless the intention is to breed with a female dog, it is highly recommended that she be spayed.

The next time your dog is acting a little strange, don’t rule out the possibly aspect of morning sickness. Dogs do get this, and it’s very common.

Just give them as much comfort and TLC as you can, and help them prepare for what’s going to be a momentous occasion for the whole household!