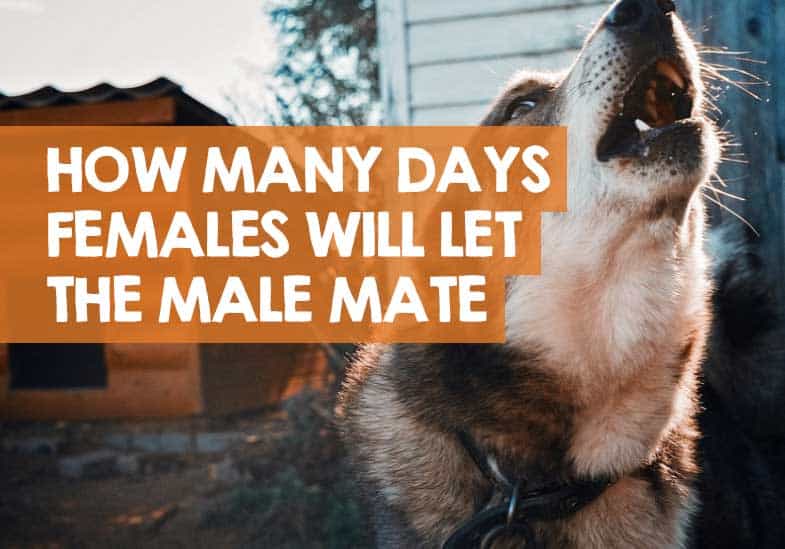 Dog breeders looking to breed their female with a visiting male will want to make sure the mating is as successful, quick, and stress-free as possible. And, like they say, if you don’t succeed, try, try, and try again… but how does that work if you need the male to mount the female again?

In this short guide, I will explain how many days a female dog will stand for a male, and how often she will let him mount her – even if it does take days to get all the eggs fertilized! Here’s the short answer first.

How many days will a female dog let a male mount her? Female dogs will typically be mounted every other day by the male, for a period of two or three matings. Anything more than this can deplete the quality of the male sperm.

However, it’s entirely down to the female. She might not want the particularly chosen male to mount her, regardless of how many days it takes.

How many days will a female dog let a male mount her?

From what I have read online, successful dog breeders let the male mount the female across a 3-day period. This will typically be on days 9, 11, and 13 of the cycle. Breeders will often separate the male and female once the mounting has occurred, to ensure a gap between the matings.

If the female dog refuses to let the male mount her, she will need help from the breeder. This can mean assisting the mating, which is an entire discipline in itself!

Now you know how many days a female dog will let a male mount her, here are some similar topics which you might also find interesting.

How many times can dogs mate in a day successfully?

Depending on a number of different factors, it is generally accepted that a male dog should only mate with a female twice in one day.

Regardless of this, if a male dog is given the opportunity to mate with multiple females throughout the day, he probably will.

Handy Hint: Here’s a more in-depth explanation of how many times in a day male dogs can typically matewith a female.

There are no rules when it comes to how many times a male dog will attempt mating. In fact, some dogs have been known to try and mate up to 10 times a day, or more!

Can a dog get pregnant on the first try?

Dogs can become pregnant on their very first estrous cycle, increasing the chance that an accidental breeding may occur.

Most successful mating will occur over a period of a few days, where the male mounts the female on 3 days, spaced out over a 6 day period in many cases.

Will a dog in heat always get pregnant?

Firstly, female dogs can only ever get pregnant if they are in heat. But being in heat is not enough for them to simply get pregnant each time the male mounts her.

Most matings should result in a pregnancy, but it isn’t always the case; particularly if the two dogs get interrupted during the act.

Here are some other fact files about dog mating and behavior which you might also enjoy reading.