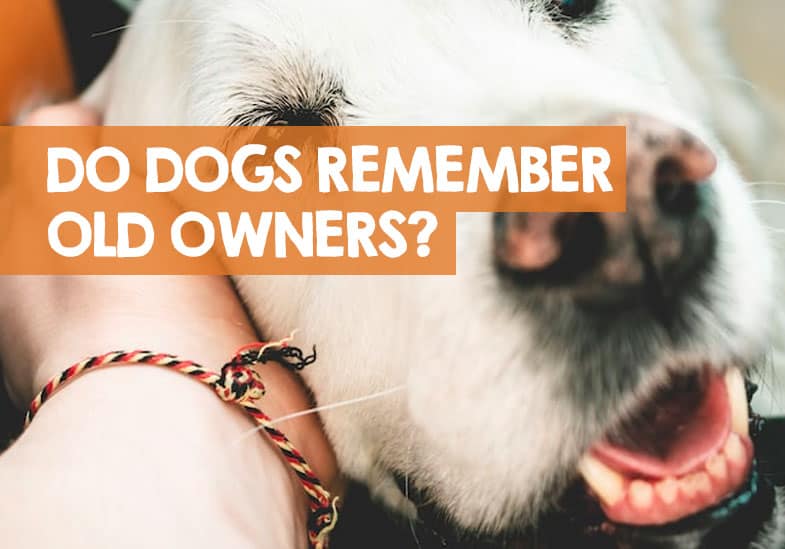 If you ever adopted or even lost a dog, you might wonder whether dogs have memories of previous owners. I’ve previously investigated how dog memory works, as it’s a fascinating topic.

In very simple terms, there is enough anecdotal evidence to suggest that dogs do remember their previous owners when they have been separated and can remember them when reunited after long periods of time.

Dogs remember life events through associative memory so if they experience the same event again, such as meeting a previous owner, this will trigger previous behaviour. If the relationship was positive, the dog’s response will be one of joy.

How do dogs remember their previous owners?

Researchers have discovered that humans and other animals can retain different types of memories. When it comes to dogs remembering their past owners it will rely on their long-term memory… but to understand that we first need to look at the short-term memory.

Dogs have a short-term memory of between 2 to 5 minutes. That is why repetition is needed when training a dog, until it becomes an automatic response. This is called conditioning.

As you will know, we condition our dogs whether we realise it or not by feeding them at the same time every day or allowing them to sleep on the bed.

Their short attention span is also the reason why dogs need to be disciplined within minutes of behaving badly.

Unlike a tactic often used with children, i.e., ‘wait till your father gets home’, dogs need to be chastised in the moment of transgression else they will not connect the punishment with the wrongful behaviour.

This is how dogs remember their old owners as they recall bonds that they formed in the past. The length and strength of the bond determines how long the memory remains.

Studies even show that a dog can remember their parents up to 2 years after being separated from them.

Dogs are also able to remember training from their mother (and an old owner). That is why it is important to leave a pup with its mother and litter mates to be socialised. These lessons are internalised and help them to understand their position in the world.

Dogs can remember scents for years and can also recall sights and sounds. When approaching someone they rely on that person’s body language and voice to bring back long-term memories.

How long does a dog remember a previous owner?

Research shows that dogs remember smells for between 2 and 5 and a half years. This means dogs can remember human smell years after being separated from their previous owner.

If these scents do not trigger a recollection, for example if the person has lost a considerable amount of weight, they will come closer for a sniff in order to get more information.

If you have been separated from your dog for a long period of time, it is best not to disguise your natural scent when meeting them again. This will make it easier for them to remember you as their old owner.

Dogs also have good spatial memory which allows them to remember the layout of their home and places where they have been.

As with all of us, memory fades as the dog gets older. One of my senior dogs did not recognise me immediately when I returned from a month-long trip.

She enjoyed the attention she was receiving from me however, until eventually it dawned on her who I was.

You could almost see the penny drop.

There was a very famous study which helps us to understand better how dogs can have memories of their previous owner’s. It’s all due to scent, with the research conducted by Gregory Berns, a Professor of Neuroeconomics at Emory University. Find out more about him and his credentials on Wikipedia.

Episodic and associative and memory

There are two specific types of long-term memory. Episodic memory is what enables you to be nostalgic. You will fondly remember a particular time out with friends or the party after graduation.

Dogs do not have this type of recollection. They do not remember that on Tuesdays they go to the park. They will only respond with glee when you jangle their lead.

Jangling the lead is an example of an associative memory or a trigger. Dogs will remember how a certain person behaved towards them and their own emotional response.

Associative memory also extends to the person and their physical appearance, voice, and demeanour. This is sadly true of dogs that have been abused.

If school children in uniform walk past your home every day and tease your dog through the fence, the dog will regard any child in that school uniform with suspicion.

Mail men these days go out of their way to woo dogs on their route, to the extent of buying them treats, in order to avoid this syndrome. The dogs form strong positive associations with the arrival of the mail man.

How do dogs behave when they miss their owners

We have all seen images of loyal dogs who lie on their owners’ graves for months, showing all the signs of grief and depression. Science has shown that dogs have a range of simple as well as complex emotions, almost as varied as our own.

Many dogs suffer from separation anxiety if their owners leave them for just a short while.  They will remain fixated on the door or gate through which their loved one exited, refusing to respond to much else. When their owners return, the welcome is enthusiastic regardless of the time spent apart.

If their owners are gone for a long period of time this could translate into a lack of vitality and a loss of appetite. They will become listless and antisocial, and will take a while to trust, or even respond to other people.

The depth of the sense of loss is determined by the strength of the bond. If the dog had only one owner, the loss will be devastating.

If there are other family members or new owners that can treat the dogs with patience and empathy, the recovery time will be shorter than if they are abandoned or rehomed to a less than ideal environment. They take time to adjust to new circumstances so the more seamless the transition, the better.

A case we can all watch play out with interest, in the media, is the relocation of Queen Elizabeth’s corgis, after her passing. They have gone to live with members of the family and have been profiled since.

On the other hand, some dogs are mercenary. If they find themselves in a completely different but more stimulating environment, they may quickly adapt to their new circumstances and seemingly forget their former owners.

My senior dog was a case in point. I once placed her in kennels for a few days while I went on a trip. I was anxious to get back to her in time to ‘save’ her from spending yet another night in confinement. When I arrived, it was time for her afternoon walk. To my dismay, she promptly ignored me and trotted off after the walker, with her tail wagging.

My other two Jack Russells used to spend days with a dog sitter whose young daughter wrote them love notes to take home. They did not consider it a hardship to be dropped off there.

When dogs are rehomed after adoption, abandonment, or other circumstances, they will take a while to readjust. While they are getting used to their new surroundings and routines, it would not be a good idea for their previous owner to visit them as this may set their adjustment back each time.

Once the dog starts feeling secure in its new home, possibly after a few months, the notion of a visit can be entertained. Do not be startled if the dogs gives them a thorough sniff to find out what they have been up to while they were away.

If the previous owner is a family visitor or a frequent visitor, the dog will soon learn to enjoy the encounters as interruptions in its routine but will settle down when they are over.

Do dogs remember their old names?

Dogs will remember their old names due to the repetition in which is was used by a previous owner. But that doesn’t mean you can’t rename a dog, you can as I’ve highlighted here.

Dogs are sociable animals that can experience a range of emotions. They love unconditionally and form close connections with other animals and with their owners.

Fortunately, in most cases the feeling is mutual, and the dog becomes man’s best friend.

This means if for some reason you have to give a dog up, or lose your dog, you can be certain that the dog will remember you as the previous owner and have memories of any old owner.