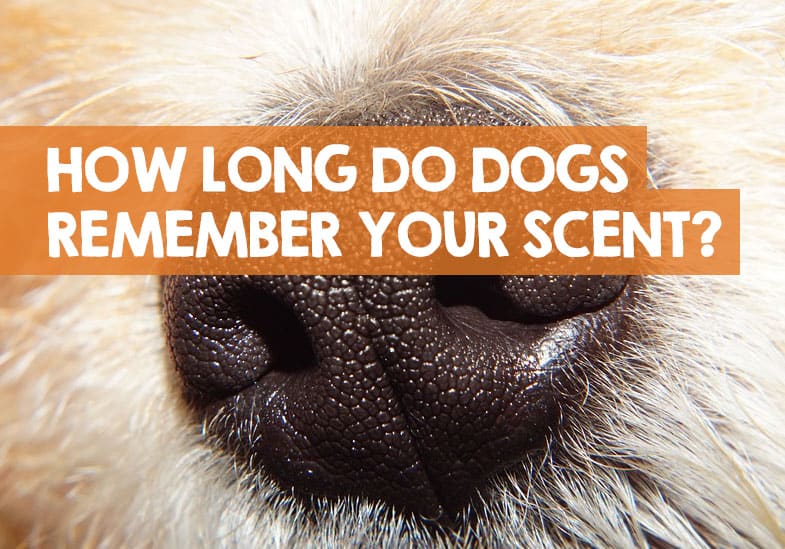 Dogs have an amazing sense of smell, and we know that they can easily recognize the scent of their owner, and even other people (think of cadaver dogs).

But let’s say your dog was get lost, or worse still, stolen… you’d like to think they would not forget you and your smell, but just long can a dog remember a person’s scent?

It’s because a dog’s sense of smell is incredibly powerful. They have over 300 million olfactory sensors in their nose. Compare this to humans who only have six million. What’s more, the part of your dog’s brain that analyzes smells is 40 times greater compared to the human brain.

If you think about how a smell can elicit a memory yourself, perhaps from childhood, think now of how dogs can remember scent.

Based on the science, it’s no wonder that dogs can remember a person’s scent for so many years. This is especially true for dogs remembering their owner’s smell. If you’ve spent quality time with your dog, your scent will be imprinted in his memory for years to come, even if you become separated from him for years.

Here’s what the research says…

How long can dogs remember your scent?

How long dogs can remember scent is connected to their incredible sense of smell, but also how their memories work. Dogs have amazing long-term memories, but like humans, can suffer memory loss in their advanced years.

At the top of this article, I stated that a dog can remember a person’s scent up to 2 years to 5 and a half years after not seeing them. I base this on real scientific studies.

For example, this first piece of research I read explained how dogs can remember their mothers up to 2 years after being separated from them as puppies. The study took 49 puppies away from 18 mother dogs in 1994 research by a Dr Hepper when they were between the ages of 8 and 12 weeks.

You might think the puppies would quickly forget their mothers, and whilst they possibly did, the research showed that scent was enough to make them remember.

This was established 2 years after the puppies and mothers were split up, when they were brought together again. Incredibly, the now adult dogs recognized their mother, with 37 of the former 49 puppies spending more time sniffing a cloth scented by their mother.

It was clear that dogs can remember scent, whether their own mother, or perhaps a human like you, the owner.

Another study using different breeds of dogs confirmed Dr. Hepper’s findings into how long dogs remember scents. Gillis C. et.al conducted a similar experiment on 8 dogs (4 Collies, 2 Cairn Terriers, 1 Golden Retriever, and 1 Shih Tzu) that had been separated from their mothers for 7 to 68 months.

In this test, 7 out of 8 dogs showed exceptional long-term memory by going towards a blanket with their mother’s scent on, but this time some up to 5 and a half years later.

This is why the owners of dog kennels always tell you to put a blanket in with your dog when leaving them for a week or two. Your scent will be familiar to them and keep them calmer in a strange environment.

Similar research was also conducted to see how long dogs’ memories of their siblings are. It concluded that some of the recognition or memory was based off remembering the scents they were exposed to in the litter.

A very famous study which helps explain why dogs remember their owner’s scent was conducted by Gregory Berns, a Professor of Neuroeconomics at Emory University. You can read more about him and his credentials on Wikipedia.

Of course, this isn’t conclusive proof by any stretch that dogs miss their owners, but it helps to explain why dogs remember the scent of humans and owners.

How dogs remember scents in the workplace

Due to their exceptional sense of smell and ability to remember scents, dogs have been used for years to help humans. One of the most classic examples of this is how dogs are used to detect drugs at airports.

Dogs can even smell things that are underwater!

A customs officer at an airport previously gave a quote for a Doggysaurus article about the strength of a dog’s sense of smell by saying:

“Nothing can disguise the smell of narcotics; airport sniffer dogs have been trained for it. We have dogs who can detect a package of sealed drugs at the bottom of full 55-gallon barrel of gasoline.”

Their sense of smell is so good, that it’s no wonder that dogs can remember your scent for a long time.

They are also used to help the police in solving mysteries with scent. Police sniffer dogs will remember human smell, perhaps from a crime scene, and then can either track a criminal, or find a dead body.

If your dog has happy times with you, every time something positive happens, they will lock that memory into their brain, and possibly associate it to a smell.For example, before I eve cook sausages on the BBQ, the mere sound of the packet opening sends my dog into a frenzy… probably because he relates the smell of meat that comes after.

Dogs are amazing at smelling and remembering people by scent.

Dogs will remember an owner’s smell for years, even if they haven’t seen their favorite human for 5 years or possibly more.