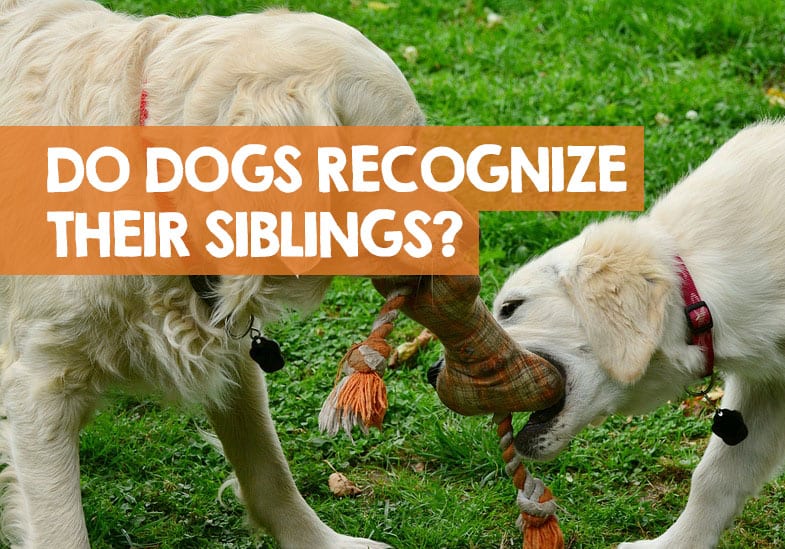 We bought our dog from a local breeder who lived just a few miles away from us. If I recall rightly, he told me that a few of the litter had been sold locally too, not just our Claude. It makes me wonder if we will ever bump into our dog’s brothers and sisters whilst out walking, and whether our dog would recognise and remember his siblings.

I decided to look at what science says about dog  remembering their siblings, and whether they would also recognise them if a meeting occurred. Here’s what I discovered.

Do dogs recognize their siblings?

The consensus seems to be that, in most cases, dogs will recognise their siblings and even their mothers after being apart for significant periods of time. Whether they will remember them though, in terms of a memory that comes to them whilst recollecting with no stimulus, it’s not so certain.

There are several factors which affect this recognition, principally how well the dogs bonded with each other before being removed from the litter.

It is not guaranteed how the dogs will behave if they do recognise each other.

There have been few studies in the past but as more and more people begin to ask this question, the more interest scientists are showing in exploring the subject.

There is anecdotal evidence that dog siblings do recognise each other after years apart. There are several videos on the Internet documenting reunions of mothers and littermates. The oldest siblings I could find were ten-year-olds that had not seen each other since leaving the litter.

How dogs recognise one another

A dog’s sense of smell is said to be anywhere between ten- and a hundred-thousand times more sensitive than that of a human. It is mainly by scent that a dog recognises its closest relatives.

Peter Hepper, of the School of Psychology at Queens University, Belfast in Northern Ireland, conducted a small study to determine whether pups recognised the scent of their mothers and siblings.

He found that at 5 weeks old, around 80% of pups would be attracted to the scent of their own mothers, as opposed to that of a strange female. Around three-quarters were drawn to the scents of their siblings.

He had similar results when the experiment was repeated with dogs that had been separated from their mothers and littermates for a period of two years. Around 75% recognised an article that had been impregnated with the scent of their relatives.

Other ways dogs can recognize or remember siblings

Other characteristics that dogs recognise are facial features and body language.

An extreme example of this recognition is found elsewhere in the animal kingdom. Zebras are nomadic herd animals that have a definite breeding season, based on the availability of food. All new-born zebras are born around the same time, and need to be able to run with the herd within an hour of birth.

However, the foals remain dependent on their mothers for food until they are weaned. Another vital factor in their survival is their ability to recognise their own mothers in order to suckle. Other females will reject them and not always in the kindest of ways.

Zebras are patterned for camouflage, and each zebra’s pattern is unique, much like human fingerprints. To ensure that hers is the image imprinted on her newborn foal’s mind, the mother criss-crosses in front of it several times, precluding it from seeing the patterns of any other zebras.

She does this until she is sure that her foal will be able to distinguish her markings from those of the others in the herd.

Historically, dogs descended from wolves, and were pack animals with seasonal breeding patterns. Several litters may have been born simultaneously within the pack.

Much like the zebra foals, pups need to be able to recognise their own mothers in order to survive. They do this by scent and body recognition.

Factors that affect a dog remembering siblings due to recognition

The strength of the bond between siblings will have an affect on how easily they recognise one another after a period of separation. If pups remain together in the litter for all or part of the crucial socialising period between 6 and 16 weeks, the chances of their forming strong bonds and of recognising each other after a period of time, will be greater than if they were separated before socialisation took place.

The period apart could also affect the ability to recognise the scent of a sibling or mother. It is not clear how long a dog stores a scent in its memory bank.

Hepper’s study would seem to indicate that there are similar recognition patterns between 5-week-old pups who were still with their mother and siblings, and those of two-year-old dogs that had been apart from their mothers and littermates since they had been removed from the litter.

Another factor might be the extent to which the pups were socialised with humans and other animals during its formative socialising phase. The other social bonds would lessen the importance of the primary bond.

How sibling dogs behave when they recognise each other.

A dog will relax in the presence of another dog that it recognises as part of the same pack or litter. This is in response to a quick ‘friend or foe’ assessment. A close relative will be perceived to be non-threatening.

The dogs will be more interested in each other than they would be in ‘strange’ dogs. They will sniff each other repeatedly, and possibly issue invitations to play. They will be more inclined to express submissive behaviour, such as rolling on their backs which exposes their underbelly.

There was a school of thought that it was vital for dogs to recognise the scent of their immediate relatives, in order to prevent inbreeding. There are too many incidents of siblings mating to suggest that that would the primary reason for recognition.

There is a modern tendency to teach dogs to socialise with other dogs by, for example, attending puppy socialising classes and taking them on play dates with several other dogs.

It might be difficult as a consequence of this training to distinguish between the behaviour of a dog toward a strange dog and its response to a long lost relative. The dog may just see this as another opportunity to play with a fellow canine.

Do dogs get sad when they leave their siblings?

There is no doubt that a life-changing adjustment is needed when a pup is removed from its mother and their litter siblings. Hopefully, the pup was weaned thoroughly and allowed to spend the required amount of time socialising with its siblings before being removed from the litter.

Ideally puppies should remain with the litter until they are at least 8 to 9 weeks old. They should not be sold below this age, and here are the reasons why (plus some legal aspects).

Studies have shown, by using MRI scans, that dogs are capable of complex emotions such as sadness. And many of us have witnessed the grief of a dog when its owner or long-time canine companion dies.

However, no studies have been done to prove that dogs suffer long term emotional trauma when leaving the litter. Puppies who are raised in homes where they are loved and cared for optimally do not experience any long-term disadvantage from leaving the litter, or indeed, a pack.

The new bonds they form with humans and dogs or other animals can be as strong or stronger than those formed with their littermates.

Is it bad to get two dogs from the same litter?

The consensus on the answer to this question seems to be ‘No’, and for various reasons. The main problem is that the bond the pups have developed as littermates could be stronger than any subsequent bonds that need to be formed.

As a new owner, you inherit any established rivalry, bullying and other dysfunctional sibling behaviour. You could also be faced with delinquent behavioural problems merely because it is more difficult to discipline two pups simultaneously, than one. The pups could also experience separation anxiety when parted from each other for any length of time.

This collection of behavioural problems is known as Littermate Syndrome and is best avoided.

However, there is one consideration to make where it could be bad to get two dogs from the same litter, and that’s potential mating.

Handy Hint: Research suggests that dogs will remember previous owners for many years.

Dogs can mate with their siblings once they reach sexual maturity. Inter-breeding is not off limits to dogs, and some breeders even do this deliberately in order for puppies to inherit certain desired traits.

But, as you can imagine, when dog siblings mate, it can present problems. Issues commonly reported include weaker than normal immune systems, more prone to disease, more aggression, and less intelligence.

Whilst we’re yet to meet any of my dog’s siblings whilst on a walk, I do now believe that there is a small chance they might recognize each other based on the research I read.

However, I don’t think my dog sits down and remembers his siblings without a visual or scent-based stimulation such as meeting one.

More articles on a similar topic, include: