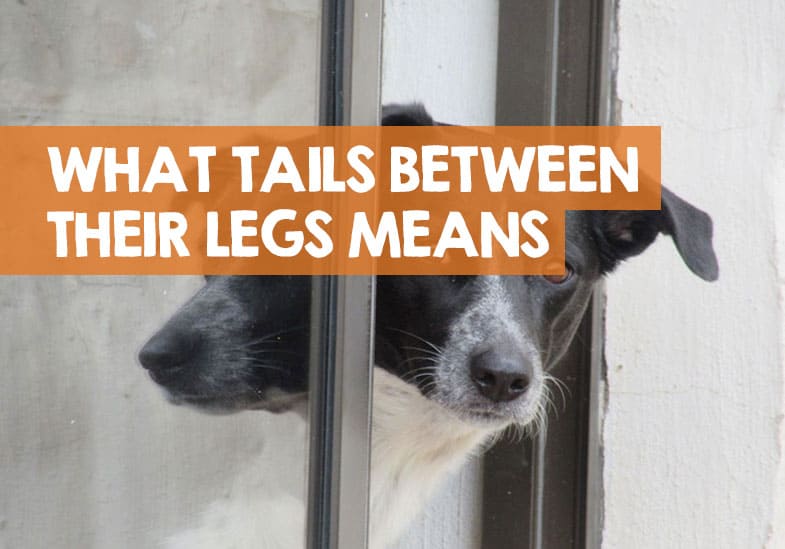 You will often see scared dogs slinking around with their tails between their legs. It’s even crept into our own use of language when we describe someone as having their tail between their legs if they are feeling guilty or have done something wrong.

However, dogs don’t always tuck their tails between their legs when they are scared or guilty. They can do it for other reasons too, all of which I explain below, with the short answer first.

What does the position of a dog’s tail mean?

The position of the dog’s tail tells us a lot about how the dog is feeling. We generally know a dog is happy when his tail is perky and wagging. We also get a sense something is not right with our dog when his tail droops and his body demeanor cries out sadness.

On the other hand, a calm dog will have his tail down or up (depending on the dog breed) in a naturally, relaxed manner.

But, when a dog’s tail is tucked in between his legs, we need to take note of the message he’s conveying. Read on as I talk about this tail behavior, what to look out for, and how to help your dog out in these times.

What does it mean when a dog puts their tail between their legs?

When your dog is feeling scared, he or she will tuck their tail between their hind legs. It’s often a sign of submission to other dogs that frighten them or even when your dog is being reprimanded by you.

If your dog gets shouted at or he’s being tormented, he’ll put his tail between his legs. I’ve also seen this behavior in traumatized dogs at rescue centers while they’re still adjusting to a new environment.

Handy Hint: Here’s a list of common rescue dog behaviors including the tail between the legs, and more serious signs of problems.

Why does my dog put his tail between his legs when he eats?

This is classic behavior in a frightened dog. It means they feel at risk when eating as they need to focus on the food and can’t be as aware of their surroundings as usual. The tail tucked between the legs when eating offers a degree of protection.

When in an unfamiliar environment, the dog  can also feel frightened and keep his tail tucked between his legs, even when eating – as they feel most vulnerable at this point.

The dog’s genitals and abdomen are vulnerable areas and when he’s feeling threatened, he instinctively feels a need to protect these areas. By tucking his tail between his legs, he’s covering these most vulnerable spots.

Because a dog can’t tell you verbally, in your language, what is going on with him, us dog owners need to rely on canine body language to understand what’s up with him. This includes using the dog’s tail behavior and position to interpret how he’s feeling.

Here are some common interpretations of what a dog’s tail position means:

By being aware of these different signs, you’re better placed to interpret your dog’s state of mind.

But not all dog breeds will exhibit the same tail language. Terrier breeds as well as the Chow will not tuck their legs between their legs when they’re frightened or being submissive.

You also have the situation with dogs who don’t have long tails. French Bulldogs are a classic example, they cannot wag their tail or tuck it between their legs as it’s too small and stumpy.

Interpreting why your dog is putting his tail between his legs

While we know that a dog will tuck his tail between his legs as a sign of submission or that he’s being fearful, you can also interpret what he’s really trying to say you by observing what has happened.

1. Your dog is apologizing

You’ve discovered your dog has taken your work shoes and chewed them to pieces. You get angry and yell at him. Or perhaps you simply give him the glare. Whatever you do, your dog knows immediately he’s done something wrong.

He curls his tail in between his legs, drops his head, and turns his eyes away from you. What your dog is doing is saying is, “I’m so sorry for chewing your shoes. Please forgive me”,

When a dog tucks his tail between his legs, he is frightened because he knows he’s in trouble and wants to apologize for his bad behavior.

2. Your dog has made a mistake

You don’t even need to start scolding your dog to tell him he’s done something wrong. If your dog has been ticked off before for taking that roast off the kitchen counter, he likely knows it bad behavior.

The next time he munches on your roast, he knows he’s heading for trouble. But he can’t help it. When you walk into the kitchen, he’s going to slunk away with his tail between his legs.

This tail position tells you he’s done something wrong and he knows it.

3. He acknowledges you as his leader

When a dog has done something wrong, he will submit to the leader of the pack. In your home, you’re his leader if he’s been trained well to understand his role in the pack.

And, when the pack leader is unhappy about something one of their members has done, they reprimand him.

Some dog breeds can be quite stubborn about accepting who is the leader of the pack. This is common in dogs such as:

These dogs are less likely to be seen with their tails tucked between their legs.

4. Your dog is feeling insecure in a new environment

You may notice your dog tucking his tail between his legs when he’s in a new environment and he’s feeling threatened. This could be when eating with a new dog around, at the local dog park, in someone else’s home where there are other dogs he doesn’t know, or even at the pet groomer. Dogs that hate baths are classic examples.

Your dog doesn’t want strange dogs sniffing his most vulnerable area, so he’ll tuck in his tail to hide the butt and genitals. The best thing you can do is reassure him and stay close to him until he feels safer.

5. Your dog doesn’t want to be mated

A female dog in heat sometimes doesn’t want a certain dog to mate with her. She then pulls her tail down between her legs to prevent any unwanted amorous approaches. It could also be she’s surrounded by too many male dogs eager to get her attention.

If your bitch is in heat, help her by making sure she feels secure in her environment and remove all males so she’s not being constantly pestered.

Dogs don’t always tuck their tails between their legs through fear and being scared. When I was a kid growing up I always believed my dog’s tail position was this way because he knew he was in trouble. Or, that he was unhappy about something or not feeling well.

But it’s not always the case as we’ve seen as I’ve researched it. The dog’s tail position can mean so much more!