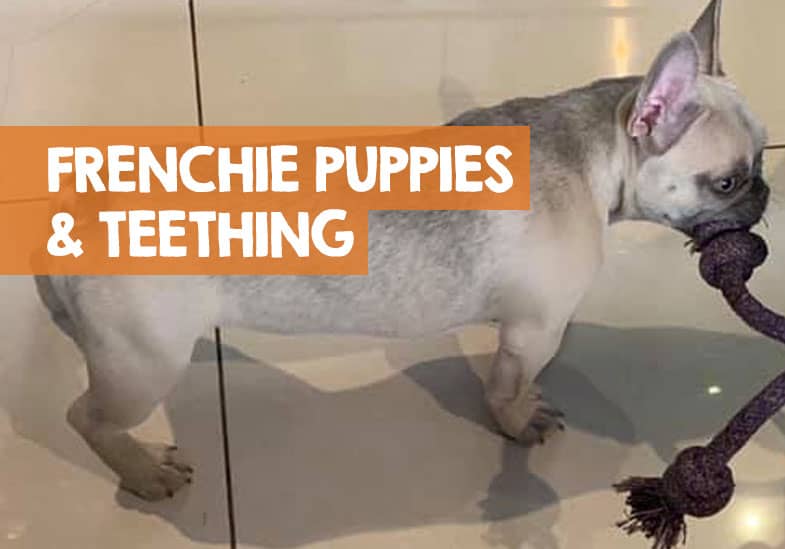 Dogs aren’t all that different to humans when it comes to teething. Just like us they also have baby teeth, and French Bulldogs are no different; French Bulldogs will teethe. If you have ever had children, it’s not that dissimilar; you have to deal with all the baby phases which includes the infamous French Bulldog puppy teething stages and the chewing… of everything!

I have a very clear memory of when we got Claude the Frenchie puppy. During the puppy months we would find tiny teeth on the floor which would come out as he chewed everything in sight to relieve his sore teeth and gums. This chewing is a huge part of the teething process, but is something you can actually help your French Bulldog puppy with.

So, today I want to share everything I have learned about why French Bulldogs teethe, at what age they lose their baby or milk teeth, what to expect as an owner, and how to help them plus ways to stop them chewing your furniture!

My intention is for this to be the only guide you would ever need to read about the dental development of your French Bulldog.

The teething stage of a French Bulldog puppy

First things first; don’t be concerned if you start seeing small blood spots on your French Bulldog’s toys or loose teeth in your carpet. This is completely normal during the teething phases. But when should you expect this to start and then finally stop?

Here’s an overview of the teething stages you can expect to experience with a French Bulldog puppy.

French Bulldogs are born without teeth. French Bulldog puppy milk teeth (aka baby teeth) don’t actually start to push through their gums until around the 14-day point at the earliest.

In terms of the puppy’s overall dental development, the baby teeth coming through do so at the same point that they begin to open their eyes. The 2-week point in their life is a massive time in their growth and becoming the French Bulldogs we know and love.

Of course, most French Bulldog owners will never get to see this phase in their dental development stage as French Bulldog puppies should not be leaving their mother until they are at least 8 weeks old.

Here’s the order in which your French Bulldog’s baby teeth will come though:

By 8 weeks of age, your French Bulldog should have grown all of its 28 milk teeth.

The next stage of dental development is the teething phase. French Bulldogs don’t have their milk teeth for as long as you might think and won’t be long until the adult teeth start to push through.

When do French Bulldogs lose their baby teeth?

French Bulldog puppies will lose their baby teeth at around 3 months or 12 weeks old. This the age at which French Bulldogs start to teeth as they lose the milk teeth which fall out.

There are 28 baby teeth in total, and surprisingly, 32 adult teeth which will grow through in the place of the milk teeth.

When do French Bulldogs stop teething?

French Bulldog puppies will typically stop teething at around 7 to 8 months old. It’s not always this specific, as some French Bulldogs will stop the teething phase before this, and possibly even after this age.

The majority of French Bulldog puppies will stop teething once they hit 6 months old, but don’t be surprised if it takes longer, it’s not an exact science.

French Bulldog adult teeth take a lot longer to grow and push through compared to their baby milk teeth. The molars at the back are the ones that are particularly stubborn.

At the very latest, your 8-month-old French Bulldog puppy should have stopped teething. Anything after that age would be unusual, but still not unheard of. Most French Bulldogs will now have all 42 adult teeth.

As you might have already experienced with your French Bulldog puppy, the first sign of teething is them chewing everything in sight. Here’s all those teething signs in full.

All puppies need something to chew on when new teeth are coming through. They will try to chew your shoes, furniture… pretty much anything. To help them out, give them toys to chew on, but not the soft stuffed ones – those simply won’t cut it.

To help your French Bulldog puppy when teething, instead invest in some teething toys that are hard and durable enough to give their gums relief.

There are two teething toys we used with our own puppy which always worked a treat.

Firstly, there’s the Kong chew toy on Amazon. Not only is a great for French Bulldogs to get their teeth around, but you can also put treats inside of it to mentally challenge them as well.

What we also used to do was place ours in the freezer before letting our teething puppy have. That way it was really nice and cold and helped to soothe his sore gums.

My second recommendation is the Nylabone dog chew on Amazon. It’s a fantastic alternative to chews like rawhide, and our dog still has this chew toy 3 years down the line. It’s extremely durable and hard-wearing.

This is how much they will end up chewing it!

How to stop your French Bulldog puppy chewing when teething

Once those milk teeth start to fall out, your French Bulldog puppy will want to get his or her teeth around anything to give much needed pain relief. You might have to hide things, reduce their access to certain rooms, and keep a close eye on them.

It’s a dog’s natural instinct to want to chew during the teething phase, so as owners, it’s our job to help them out. Here’s what you can do.

Puppies can cause utter devastation whilst teething. You just need to look at how chewed the corner of our wooden dining room table was during the teething phase.

Did You Know? If you find that your French Bulldog continues to chew on things after teething has finished then it could be the sign of something else. This can include stress, boredom, worms, gastrointestinal problems, or even a dietary deficiency.

What other owners say

I am part many different French Bulldog social media groups, and recently asked people about their own experiences with their own puppies and teething.

Here’s a selection of the best responses on how to help teething French Bulldogs that chew things:

“Make sure you have lots of chew toys, so your French Bulldog has options and doesn’t get bored. Bored French Bulldogs will start chewing your things when they teethe. Mine loves to chew but he’s always been good about only chewing his toys. I’ve always made sure he had many different kinds so he doesn’t get bored with them. Nylabone and Kong Toys are two of my faves.”

“Get lots of rawhide alternatives! Bully sticks and Himalayan cheese sticks are good. Kongs are wonderful too as you can stuff them with banana and peanut butter (make sure it isn’t the kind sweetened with Xylitol) and freeze it! We also use real bones from the meat department at our local store, frozen so they last longer, and our dogs love them.”

“As to teething, freeze your French Bulldog some ice cubes with some meat jelly in them. If your French Bulldog is teething and eats dry food try and soften the biscuits as chewing hard food can be a big turn off put for them as their gums can be quite sensitive.”

“French Bulldog puppies should have a variety of several different texture chew toys. Puppies crave different things at different times and are learning what their teeth can do in addition to the teething that they are going through. Don’t be surprised if you find your puppy chewing on the drywall. it’s all about the texture. I recommend 20 different teething toys and rotate them. Kong’s with treats are great as well.”

“When your French Bulldog is teething put lavender oil on things. They hate the smell and it will stop them chewing your stuff. And give him chews. It is boredom that makes them chew more than anything.”

“We used old tea towels when our French Bulldog was teething. Just put a knot in each end and wet them, then freeze them! He loved it and still just loves playing with tea towels now at nearly 2 years old. Would recommend putting the tea towel in a food bag when freezing.”

At the age your French Bulldog starts to teethe, he or she will suffer with sore gums and the pain of their baby teeth being pushed through. How much pain they are will vary from puppy to puppy – our own dog had quite mild teething pain from what we could tell, but it depends on the dog.

But, almost all of them will chew. You can expect to see little teeth on the floor or stuck into things they have chewed on, plus those little blood spots I mentioned.

During your French Bulldog’s dental development just give them plenty of love, attention, understanding… and chew toys!

At this time of their dental development, your puppy will need your love and support, plenty of chewable toys, patience, and understanding.

If you enjoyed this guide to French Bulldog teething ages and how long it all lasts, then you might also like these other French Bulldog puppy related articles: