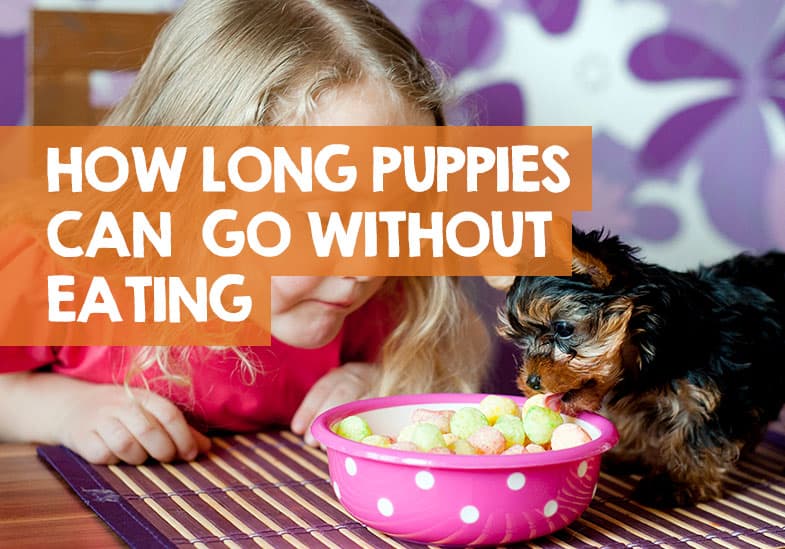 Dog owners often worry about how long a puppy can go without eating. You might be asking because the mother is no longer around to care for a newborn or you’re bringing an eight-week-old puppy home for the first time.

Obviously, all of the guidance here is age-related, as there’s a big difference between how long a newborn puppy go without eating before dying and leaving a 3-month-old puppy without food for a few hours.

No puppy should go without eating more than a couple of hours beyond the required feeding periods. The exception to that would be how long puppies can go without eating at night, as they will be asleep – more about that in a moment though.

In this guide I will give some very general guidance, but nothing should replace the advice you can get for your vet.

How long can a puppy go without eating after birth?

For the first two to three weeks of your puppy’s life all they’re going to focus on is feeding, sleeping and keeping warm. When your puppy is born, they’re blind and not able to walk. This doesn’t stop them from finding food though!

With their keen sense of smell and a bit of nudging from their mother, the puppy will be able to find a nipple to suckle on. For the next couple of weeks, your puppy is going to be nuzzling on his mother’s nipple every two hours.

How long can a newborn puppy go without eating before dying?

If your puppy goes any longer than two hours without eating, he’ll become prone to falling ill and could even die. His immune system will take a knock and be less resistant to fighting off infections. From birth, puppies need to be watched to make sure they’re all feeding as often as they should be.

From three weeks old, your puppy will start feeding every three hours. He’s more alert now and also starting to stand. In his fourth week he’ll be feeding every four to five hours from his mother’s milk. You can start introducing puppy food thinned down with fresh water.

At this stage, your puppy can go without food for maybe an hour beyond their normal feeding time. But as your puppy is developing and growing fast during this stage it’s not advisable for them to go without eating for more than five hours.

How long can a puppy go without eating from 4 to 8 weeks?

From four weeks old, your puppy will start to get more comfortable eating a meal made of water and puppy kibble. But they’ll still be topping up on mum’s milk. Every week the amount of puppy food will increase while they slowly wean off their mother’s milk.

Between four and seven weeks, your puppy can go without eating for every five to six hours. They can manage to go without food a couple of hours beyond five hours but once again, this is not advisable.

If your older puppy of six weeks old goes up to eight hours without eating, they’ll survive. But this shouldn’t happen too often while they’re still growing.

By the time your fur baby has reached eight weeks old, their mother is getting tired of them suckling on her. She’ll start to naturally wean them off while you’ll start to increase their daily puppy kibble meals. Ideally, an eight-week-old puppy needs to be fed three to four times daily.

To ensure your eight-week-old puppy is getting the right nutrient intake, always use the puppy kibble guidelines on the package. This will give you peace of mind their eating correctly. It’s vital they don’t miss any meals at this stage too.

How long can a puppy from eight weeks old and older go without eating?

Handy Hint: When you feed your dog can also be important, for example here I talk about whether it’s bad to feed your dog later at night or not.

This is the time when most puppies leave their mother (and siblings) to go to a new home. It’s essential to keep up their feeding routine and avoid missing any meals.

Once your puppy is three months old you can drop down to two or three meals a day. By the time their six months old, your puppy can go without eating up to seven hours.

How long can a puppy go without eating at night?

Providing your puppy doesn’t have night-time anxiety and is sleeping ok after dark, then they can go without eating and drinking all night.

When my Claude was a puppy, he would go to sleep when we did at around 11pm and sleep all the way through until 6am – but yes, he would wake up being ravenously hungry as you might expect!

Handy Hint: Not all puppies are good sleepers, but some can appear to sleep more than what you might think normal but let me put your mind at rest.

Why your puppy is not eating

Sometimes your puppy won’t feel like eating and that’s fine as long as they’re only missing one or two (at a stretch) meals – older puppies can go this long without eating and should be fine.

You should get concerned when they stop eating altogether. Younger puppies have less body reserves such as fat than older dogs.

A young puppy shouldn’t go without eating for longer than 12 hours. If this happens, you’ll need to take your pup to the vet for a checkup. In some very severe cases, it could be parvo.

There are a number of reasons your puppy may not be eating:

Your vet will be able to assess your puppy and get to the bottom of why they’re not eating. They’ll also be able to advise on how to get your puppy eating again.

What to do to get your puppy eating again

You don’t want to leave it too long before your puppy starts eating again. If your vet finds nothing wrong with your puppy, use the following tips to tempt your pup to feed:

At all times, always make sure your puppy has fresh water to drink to prevent dehydration (don’t opt for distilled water at this point, here’s why).

Your puppy is one the most precious joys of life. When they’re very young, they depend on their mother (and you) for their survival. This includes getting enough food, water and warmth.

At different stages of their life, puppies have different dietary needs. They also need to eat at regular intervals, or else their physical and mental growth will be stunted.

The first eight weeks of your puppy’s life can be called the “building blocks” of your puppy’s developmental stage. They’re maturing rapidly during this time, learning to stand, walk, run and play.

All this requires getting adequate sleep, warmth and a proper diet.

How long a puppy can go without eating depends on whether you’re talking about a newborn pup or an eight-week-old fur baby… and I hope I’ve given you all the details you need to know.

Here are some recent related posts regarding similar topics.