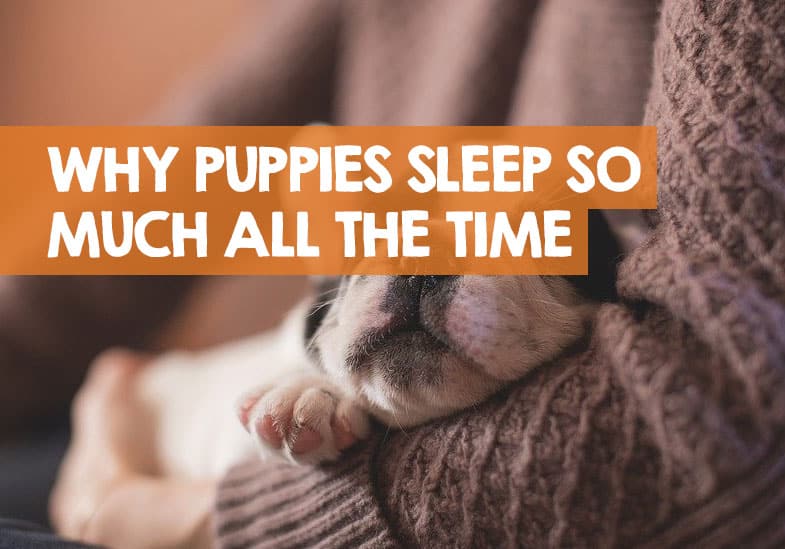 If you’ve become a first-time fur baby parent, congratulations! You’re about to learn what special creatures’ dogs are and how much love they have to share. You’re also going to discover your puppy likes to sleep. A lot! So much so, you’re going to wonder if there’s something wrong with your new dog and whether your puppy is sleeping more than usual or normal.

Why is my puppy sleeping so much? Puppies sleep a lot, and it is normal behavior for them to sleep between 18 to 20 hours a day. Some puppies will also start sleeping more than usual at certain points in their development and growth, so most of the time, sleeping too much isn’t an issue.

Puppies grow up so fast while developing both mentally and physically. They need to sleep a lot to cope with this development as well as build a strong body and healthy immune system.

It’s normal for your puppy to sleep more than you expected. Human babies like to sleep a lot so why shouldn’t our fur babies be the same? But what is a normal amount of sleeping and what is not so normal?

Okay, now that you’re hopefully a bit more relaxed you can read on and find out more about puppies sleeping so much or more than usual.

I’m going to take you through the stages of a growing puppy’s sleeping patterns and how to make sure your puppy is getting enough sleep. I’m also going to talk about what to look out for if your puppy is sleeping too much and when you need to get worried.

Why is my puppy sleeping more than usual?

Puppies will often sleep more than usual as they enter a new stage in their development. You can see those stages a little lower down the page… but age has a factor in how much they will sleep, and whether it’s a lot compared to usual.

What are normal sleeping hours for my puppy?

Your puppy is going to be sleeping so much in the early weeks of life, between 18 to 20 hours a day. That includes both daytime and nighttime (in case you were wondering!). In between sleeping, your puppy will wake up for spurts of activity.

If it’s nighttime, he or she may want to go outside for a pee in the middle of the night.

Why newborn puppies sleep so much

If your puppy is a newborn and under four weeks old, then you can expect him to sleep up to 22 hours a day. It’s perfectly normal. All a newborn pup has to worry about is nuzzling for his next feed. They may even do this while half dozing if mum is close by.

If you’re nursing a puppy at this age because his mother is not able to then expect lots of sleepless nights. Even if your newborn is sleeping most of the time, he still needs to be fed. You can expect to be bottle feeding a newborn pup every two hours.

The older he gets, the more hours he can go without feeding.

Avoid picking up a newborn puppy too much. He needs to get all the sleep he can get in his first two weeks. Once he’s more active, from three to four weeks, his sleeping patterns will change.

Why puppies from one to three months sleep so much

From four weeks to about three months old, your puppy will be extremely active. He’ll be walking, will have started barking, running and playing from seven to eight weeks old. But he still needs plenty of sleep to help him as he grows.

You can expect your puppy up to 3 months old to be sleeping up to 20 hours during this stage of his life.

From three months old, you can expect your puppy to need less sleep. They should be sleeping about 15 hours a day up to one years old – so it’s still normal for them to sleep a lot.

Your puppy is still growing until they’re about 12 months old. Of course, this does depend on the dog breed as well.

Your dog’s sleeping pattern may also change slightly whenever he has a growth spurt. Then you can expect them to sleep a bit more to compensate for all the energy used up during this period.

Once your dog is out of puppy stage, you’ll notice they’ll be sleeping on average between 12 to 14 hours a day. But, if you have a large breed dog, expect them to still get in up to 18 hours a day of sleep.

If your dog is a hard-working dog such as on the farm, herding cattle or sheep, or doing his bit for law enforcement then he’s going to get less sleep in during the day.

The following factors then determine just how much sleeping your fur baby does every day:

Once your dog reaches seven years old, they start sleeping more hours a day. For the larger breed dogs such as your Great Dane, Alsatians and Golden Retrievers, you can expect them to sleep up to 18 hours a day.

Smaller breed dogs are only considered “old” or “senior” when they reach 10 years old. They’ll also start napping anything between 16 and 18 hours a day.

Your puppy needs to get enough sleep to grow into a healthy dog. Sleep allows his central nervous system to develop properly as well as his muscles, brain and immune system. Puppies zap a lot of energy while awake and this needs to be replenished often.

Fortunately, most times, your puppy will fall asleep when his internal clock tells him to. However, if you notice your pup is over excited, then you may need to help him to take regular naps. You can do this by:

Your puppy will sleep anything between 30 minutes and 2 hours in one stretch. Remember to factor this in when scheduling his day. Always encourage him to take his naps before he gets overstimulated. This means cutting down on the fun time no matter how much you or your puppy are enjoying it!

How to encourage your puppy to sleep at night

Your puppy will sleep up to eight hours during the night. He’s likely to wake you up once during the night to have a bathroom break. This is normal. To make sure he’s getting his proper quota of nighttime sleeping, you want to do the following:

Your puppy needs to learn to sleep through the night, so you also get your beauty sleep and he gets what he needs for healthy development.

Handy Hint: If your puppy is showing signs of anxiety, I’ve created a guide which might help you decide on what to give them to aid sleep.

How do I know if my puppy is sleeping too much?

Now that you know it’s normal for your puppy to be sleeping anything between 18 to 20 hours, you can worry when they go beyond that time. Or, if they’re lethargic and listless on waking between naps.

Besides the fact that they may be ill, your puppy may not be getting an adequate diet or they’re not drinking enough water. It’s always a good idea to take your puppy to the vet for a check up if you think they’re sleeping more than normal.

Puppies sleep, a lot. In fact, dogs sleep a lot.

Even as I write this, my 4-year-old French Bulldog is asleep in my office. Here’s been snoozing for 4 hours since our last week – it might seem like too much, but it really isn’t!