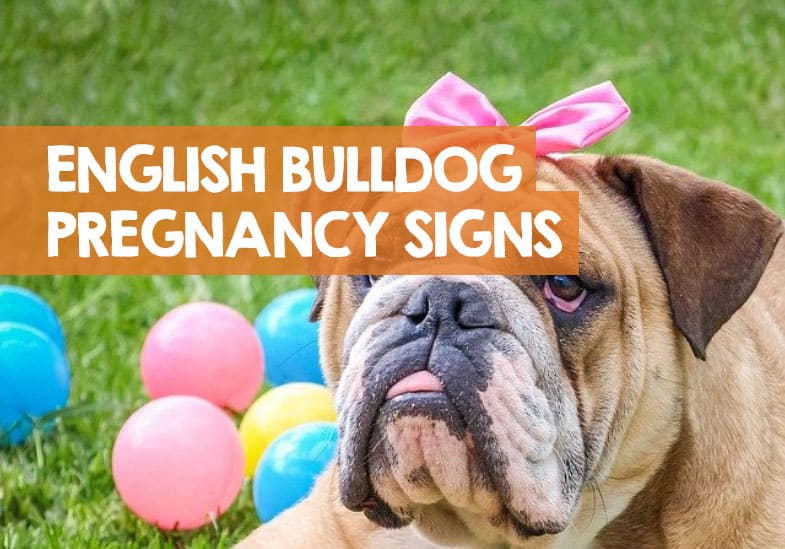 If you have been trying to breed your English Bulldog, or perhaps they’ve had an encounter with a male, pregancy could well be on the cards. There are some early pregnancy signs you check for which will help you to understand if your English Bulldog is pregnant or not. These include the early signs of gestation, plus each stage of an English Bulldog pregnancy outlined in brief – all of which are lower down the page.

What are the early signs if your English Bulldog is pregnant?

Some of the easiest ways you can know if your English Bulldog is pregnant is by ticking the following points off this checklist:

Even during the first 20 to 30 days, a vet could feel your dog’s belly and might be able to say whether she is pregnant or not.

Handy Hint: Whilst it’s possible to feel puppies moving in the belly of a pregnant dog, it’s not often until 5 or 6 weeks into the pregnancy that this is really that common.

None of the methods above are particularly scientific, and so the accuracy can be all over the place. With that in mind, below are the best ways that you can tell if your English Bulldog is pregnant with more certainty.

How to tell if an English Bulldog is pregnant more accurately

There are two fail-safe tests you can get a vet to use that will 100% tell you if your English Bulldog is pregnant or not.

This is the quickest way to check if your planned mating and conception worked; an English Bulldog ultrasound scan. Vets recommend you do this pregnancy test as early as 21 days after the mating or artificial insemination occurred – but will be best if you can wait at least 25 days.

An ultrasound is non-invasive and painless but can be a bit scary for timid dogs. The vet will need to shave a little hair away from your English Bulldog’s belly; this might stress her out a little bit due to the noise.

An English Bulldog ultrasound procedure can cost up to $500 dollars, which in UK money currently converts to around £380 pounds. It’s not cheap, so you might want to wait for the next method.

If you tried to breed your English Bulldog 5 weeks ago or more, you can also pay for a blood test. The blood sample will be checked for pregnancy hormones and will be a lot cheaper than an ultrasound.

It’s important to not do this test less than 5 weeks after mating because the results can come up as being negative, even with an English Bulldog who is in the early stages of pregnancy.

For the most accurate pregnancy test, choose the ultrasound after at least 25 days since mating. As well as being a more accurate of telling if your English Bulldog is pregnant, you will also be able to see the puppies on the screen and scans… an exciting time!

Whilst you can see the puppies, you still might not be able to tell exactly how many there are in at the early stages, as the body shapes can overlap. Only an X-ray further down the line where the vet can count skulls will give you an accurate number on the litter size.

Handy Hint: This how long your English Bulldog will be pregnant for, with each stage in more detail.

An X-ray can be performed after 45 days of pregnancy and will let the vet have a far better look at how the puppies are developing in the womb.

As well as the skull count, your vet will also be able to see how large the puppy heads are, giving an indication on whether a natural birth or C-section is recommend for safety reasons.

Once you know if your English Bulldog is pregnant, you will need to get prepared. Here’s what to expect with each stage of the pregnancy with tips on how you can help her out.

There’s not a lot going on visually during the first month of an English Bulldog pregnancy. You might not even know your English Bulldog is pregnant without an expensive ultrasound.

However, there is a lot going on internally, both physically and mentally:

Towards the end of month one, you might start to see some subtle changes in your pregnant English Bulldog such as:

Not all English Bulldogs will exhibit the pregnancy signs listed above, and in fact, they can even be exhibited during a phantom pregnancy – yes, this really can happen!

Your English Bulldog’s pregnancy is progressing very quickly now, as the growing fetuses start to actually look more like puppies. Here’s what you can expect:

Changes in your English Bulldog’s appearance and behavior won’t be as subtle now, with some very obvious signs of pregnancy including:

In the third month, she will start getting ready to have her puppies. They will end up getting into position before arriving on the 63rd day on average. Here’s what you can expect in month 3:

How to prepare for an English Bulldog pregnancy

Your English Bulldog will be pregnant for between 58 and 68 days, with the average delivery date being after 63 days. Most of her physical changes will actually happen during the last 14 days before she gives birth.

As an owner (or breeder) there are some ways in which you can help her have as comfortable a pregnancy as possible such as:

When it’s time to give birth, your English Bulldog can start to look agitated, including pawing at her nest, walking back and forwards to it, and then panting before settling down.

It can then take anywhere from 2 to 12 hours before you see the first puppy coming through.

Once an English Bulldog puppy comes out, the mother will bite at the sack and lick the new arrival to start his breathing off. If she is unable to do this, or too slow, you might need to help out.

If the puppy does not get onto the mother’s teat, you can place it on there to help to aid immediate feeding.

Consult with your vet on which method he recommends. Sometimes this will depend on how many puppies she is having. If she is only having a couple of puppies then they will be bigger, and could be harder to give birth too, meaning a C-section is chosen.

Now that you know if your English Bulldog is pregnant, you need to get prepared… get ready for the ride, as it’s going to be amazing!

If you find out that your English Bulldog is pregnant, then please do get in touch, as me and the readers would love to see some photos of the new puppies!

I frequently write about English Bulldogs, and here’s some of my more recent content: