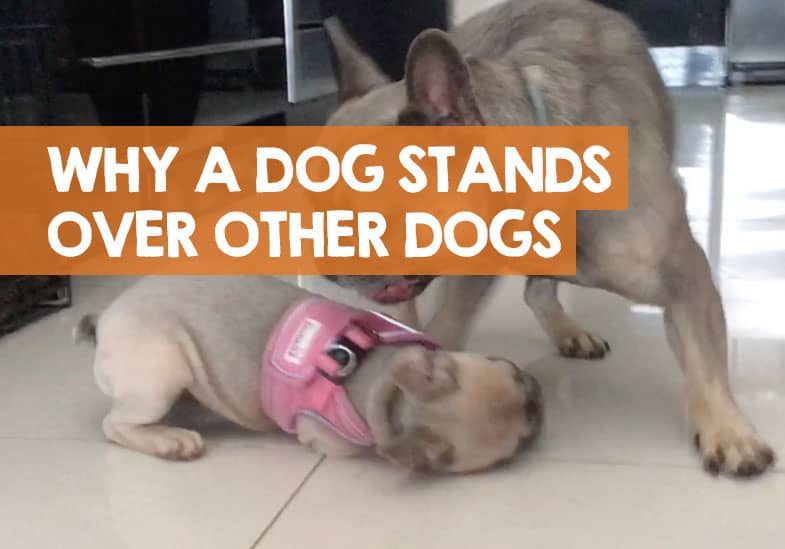 I met a friend recently for a dog walk as he had recently got a second dog. He wanted my advice as had noticed some strange dominant behaviour from the new dog. He said that the new dog would stand over the older dog when he was lying down. Here’s what I told him about this potential problematic behavior.

When a dog stands over another dog, it can be seen as a form of aggression. Action may be required from you if it progresses to more problematic behaviors.

What it means when dogs stand over other dogs

Dogs communicate a lot more than some people realize. Just because they do not talk does not mean they are not saying anything. Dogs relay messages are through barking, whining, and growling.

Their primary mode of communication is through body language, which is easier to understand if you are more familiar with the animal.

Typically, when a dog stands over another dog who is lying down, this is a sign that dominance is being asserted. The dog may also place a paw or chin on the lying dog’s shoulder.

Sometimes, the dog will attempt to raise themselves onto their tiptoes to appear larger than the other.

Is this aggressive behaviour?

One dog standing over the other dog could be a sign of aggression, but there may be other factors to consider. It may be a sign that the ‘dominant’ dog is accepting the ‘submissive’ dog into their pack.

In the wild, there can only be one alpha leader of the pack, so they are establishing the roles. The alpha is taking on the role of protector, determined to take care of their pack.

Sometimes, it will be the smaller, female dog who is the submissive one, and the larger, male dog will be the alpha. Usually, both dogs will accept the hierarchy, and there are no future problems.

Another reason this occurs is that one dog wants to take control of the current situation. This is commonly seen among older dogs who are trying to control rowdy puppies.

However, it can also happen where puppies are trying to seem bigger and taller so that they feel they are controlling the situation in their way.

When to be worried about standing behavior

If you notice signs of aggression and dominance in dogs, you may need to step in.

Assuming that one dog backs down and quietly accepts the dominant and submissive roles, the problem should resolve itself and you do not need to worry.

However, if both dogs are equally dominant, they may start to fight each other. In this case, you should intervene before the problem gets worse.

How to stop your dog standing over the other dog

Doing this may only increase the chances that the aggressive dog will challenge the submissive dog.

As well, you should not punish the alpha dog for their standing over behaviour. This may encourage the submission dog to pick up aggressive behaviour and mimic it.

It could also increase the level of anxiety among the dogs, and cause additional fighting between them when you are near.

If aggression between dogs is becoming a problem, you should keep both of them on a predictive routine. By doing so, you are controlling exactly when they receive treats, food, and go on walks.

You will be able to identify the triggers that are causing aggression and treat them from there.

You might also notice the dominant dog attempting to steal the other’s food. For instance, the problem may be when you are feeding the dogs, and one tries to eat from the other’s bowl.

To solve this, keep the bowls at far enough distances that they can see each other but focus on their own food. Gradually, you will move the bowls closer and closer together. The goal will be for them to eat side-by-side peacefully without you needing to intervene.

Signs of dominance towards you

You should be worried if your dog starts showing signs of dominance towards you. They may do the same behaviour of standing over you while you are lying down, creating a T-pose.

They may also stand up on their hind legs and put their paws on your shoulders. This is the dog’s way of telling you that they are the alpha over you as well, and this needs to be addressed right away.

When dogs think of you as their subordinate, they may start to snap at you, growl when you touch his toys, or disobey known commands. This is problematic behavior, and they may get violent or end up biting someone.

If there are children in the home, they should not be left alone with a dog who has displayed any signs of aggression that have not been addressed.

In this situation, you should not inflict physical punishment. This will only aggravate the dog and cause them to act out even further.

You should back out of the area and use a happy, cheerful voice to alleviate the dog’s tension.

Next please seek immediate help from an animal behaviour specialist. The specialist will work one-on-one with your dog to train them out of aggressive tendencies and help them resume their daily life.

They may also wish to observe the dog in your home first so that they can get an idea of which type of training will help them.

How to reduce aggressive behaviour in dominant dogs

There are few ways in which you can prevent the chance of aggressive behaviour from occurring in the first place. These can include the following:

With a little patience and training, you might be able to stop your dog standing over the other dog. However, it might be that you simply accept the status quo or one being more dominant than the other.

Providing there is no aggression and food stealing, both dogs might actually naturally fit into this social hierarchy.