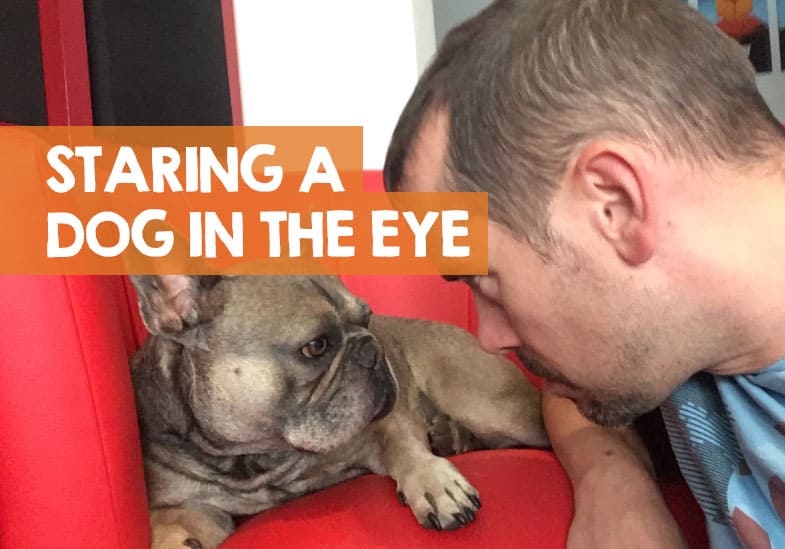 There are conflicting ideas about whether it’s bad to stare a dog in the eyes. Whilst some dog owners, trainers and behaviorists swear by it, claiming that it can help deepen your bond with your pup and make them easier to train, others argue that it will only serve to distress and agitate your dog. I believe there’s a reason for these varied opinions; the difference between staring and eye contact with dogs.

So, that might sound a little confusing, but let me explain as we need to make the important distinction between staring at a dog and making eye contact with a dog. The two things are different. One could provoke a negative reaction, the other, a positive reaction.

Whilst the latter can help you build a more positive, loving relationship with your pup, looking into a dogs eye with a stare can be bad, resulting anxiety and confrontation.

It depends on the circumstances, and often whether you know the dog, or it’s a complete stranger to you. For example, with your own dog, eye contact can be good rather than bad, providing it’s the right setting and mood. The eye contact should also be short. This means that positive eye contact with your dog should last around one to two seconds.

More prolonged eye contact, which is more how you would describe staring, can have negative consequences. Dogs can see staring as a threat, which will then cause them upset and anxiety.

Do dogs like to look you in the eyes?

Your dog does like you to look into their eyes in certain circumstances. According to a study, it can actually be a good thing (here’s the 2016 study).

“Results provided evidence that pet dogs did not rely on details of owners’ direction of visual attention. Instead, they relied on the whole combination of visual cues and especially on the owners’ availability to make eye contact. Dogs increased visual communicative behaviors when they established eye contact with their owners.’

The key difference though is between staring and eye contact.

To give you an example, when two dogs meet in a park, they will rarely make sustained eye contact. Unlike us humans, eye contact is not considered a positive thing. The only time that dog will tend to lock eyes is for the temporary moment when play is just about to start.

You’ve probably seen it; if they are both up for the game, the play bow between the two will happen first. They will then make eye contact for a few seconds, which I assume is a form of reciprocation, and then take off and play.

On the other hand, if two dogs meet in a park and lock eyes and stare each other down, it’s a sign of aggression and means potential trouble is brewing.

And this is all you need to understand; dog eye contact or staring is all context based.

So, if you look a dog in the eyes and don’t offer any other visual or verbal clues as to how you’re feeling, it could scare the dog and provoke a negative response.

This is why it’s bad to stare a dog in the eyes, particularly one that you don’t know. Strange dogs don’t have any prior trust in you and don’t know what your intentions are. If the dog looks skittish and on edge, prolonged and direct eye contact is bad and should be avoided.

It’s not about dominance

A misconception around dog-human eye contact is its correlation with dominance and power dynamics between yourself and your pet. The truth is, there isn’t really any such thing as dominance between a dog and an owner.

Whilst a lot of owners (and some trainers) swear by staring at their dog to assert dominance, the fact is that this is nothing more than a myth.

In fact, the trainer who originally championed this ‘training’ method has since admitted that the link between staring and dominance is tenuous, to say the least.

Handy Hint: You might also have a problem whereby your dog won’t settle, and will instead stare at you all night as you sleep. Here’s how to fix that one.

But that isn’t to say that eye contact can’t be an important tool when it comes to training your dog and making them more obedient. It just comes back to making that important distinction between staring and eye contact.

Whilst we’ve established that staring at a dog could result in a reaction you don’t want, science shows that sharing eye contact with your own dog can be beneficial. Another study from 2015 revealed that when a dog looks us in the eyes, we release oxytocin – a hormone released when mother dogs nurse their puppies – into our bloodstreams.

“Findings support the existence of an interspecies oxytocin-mediated positive loop facilitated and modulated by gazing, which may have supported the coevolution of human-dog bonding by engaging common modes of communicating social attachment.”

This in turn suggests that eye contact between dog and owner can help to strengthen your bond on a familial level, especially since dogs are able to pick up on their owner’s oxytocin levels once it’s expelled through their urine.

If distractions prevent your dog from learning new tricks or co-operating with you in agility tasks, training them to look into your eyes on cue can help to gently direct them back to the task at hand and become more disciplined as a result.

Handy Hint: Other studies have suggested that dogs believe owners are their parents. Building up trust with eye contact would certainly support that.

What does it mean when a dog stares you in the eyes?

If your dog is the one making the eye contact and staring at you, you might be wondering what is behind their desire to stare at you. There is more than one reason why they suddenly might be watching you like a hawk, but all of them are important and worth paying attention to.

1. They are trying to read your emotions

Dogs are more intelligent and attuned to human emotion than we sometimes give them credit for, and they’ll know that if you seem happy, you are more likely to give them positive attention (and treats!).

This is particularly true if you have previously trained your dog using methods related to positive reinforcement. You might find that your dog stares at you to seek cues that you want them to perform a trick or specific task such as ‘sit’ or ‘fetch’.

As mentioned, if treats or other rewards are often factored into these activities, you can be sure that your dog will be keen to act upon any sign that you want them to perform a trick.

It is also worth noting that with the absence of language, dogs rely heavily on our body language and actions to understand their environment and what could be happening next. For example, if you get out their lead, they will learn to associate that with imminently going on a walk.

Essentially, your dog sees you as their compass, as they study your mood, actions and gestures for signs of you doing something that will impact them.

Handy Hint: In the absence of being able to talk with our dogs, we rely heavily on body language. Here’s how your dog can possibly apologize to you using visual clues.

2. They want to tell you how they feel

On the flip side of the coin, your dog might stare at you in order to try and convey their feelings to you as opposed to trying to work out yours.

For example, if they are standing by the back door and refuse to break eye contact, it is safe to assume that they are trying to tell you that they need the toilet.

One thing to be careful of is how your dog stares when you’re eating. Whilst it is natural for them to stare out of interest, hunger and a desire for you to share with them, you shouldn’t give them food if they stare at you eating.

This will just teach them that if they stare at you long enough, they will get a reward, which isn’t a productive or healthy behaviour pattern for them.

Furthermore, if their staring is coupled with unusual symptoms, they might be trying to let you know they feel unwell. If you have any doubts, you should talk to your vet immediately.

Handy Hint: Find out why dogs hate it so much when you blow in their face or on their nose.

Provided that you understand the distinction between staring at your dog and making eye contact with your dog, you can feel confident that through more eye contact, you and your pup can have a deeper bond and become more in tune with one another.

However, if you are out and about and you encounter a strange dog, it could be bad to stare them in the eyes, so please exercise caution.

I regularly write about dog behaviours and quirks. Here are some related posts you might enjoy.