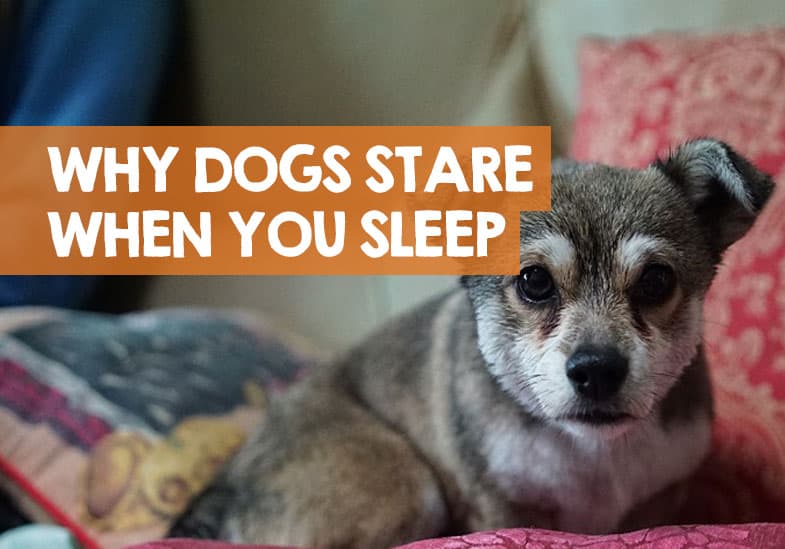 Occasionally dogs will display behavior that is more unnerving than funny. For example, have you ever woken up in the middle of the night, only to turn over and see two moonlit dog eyes staring back at you? In the pitch-black darkness of your bedroom, don’t feel foolish if this makes you jump or scream out of fright.

If this sounds familiar to you, then you are almost certainly not alone in this experience. You need only look online to see how common the phenomenon of dogs staring at owners as they sleep is.

But why do dogs like to stare at us at night? I decided to research it and come up with what I think is the most comprehensive answer to the nightly staring competition.

Why does my dog stare at me when I sleep? Dogs will stare at you during the night when you start to stir and wake, making it appear like they were staring at you during your sleep. Other dogs will also stare to get your attention, wanting you to wake up and play.

That’s the very short answer, but they are some other elements to it which you should know if your dog is staring at you during the night… all explained below.

Why does my dog stare at me at night when I sleep?

Most dog owners find waking up to their dog staring at them a little startling (especially if it is in the middle of the night or if they are inches away from their face). But the majority of us will understand that it is not an indication of aggression or anything sinister in nature.

Instead, you can chalk it down to your dogs being strange or overly protective. But the real answer as to why do stare at you as you sleep can be much more complex.

The fact of the matter is, nearly all dogs watch and stare at their owners sleeping from time to time, it is completely normal and harmless behavior. In most cases, older dogs will stare at you as you sleep watch for a reaction to a movement you may have made, looking for subtle signs that you might be waking.

At other times, they may stare at you if you startle them by suddenly shifting or speaking in your sleep.

Plus, most dogs are very protective of their pack members, and they will keep a close eye on them when vulnerable, namely when injured, asleep or distressed.

If they hear a strange noise or something outside, they will immediately become alert, readying themselves to defend their master and home against any threat.

Unfortunately, this trait can sometimes cause them to bark or growl at the most innocent noises. Often owners might think their dog is barking at night for no reason, but there’s usually something behind it.

With younger or high-energy dogs, this habit of staring could be an indicator of pent-up energy.  Although most canines need around 14 hours of sleep to function properly, they generally fulfill this need by taking numerous power naps throughout the day.

Although dogs sleep for longer durations at night, they periodically wake up or move around briefly before settling back down. Some can be very restless too, and here’s how to help them out with that problem.

Therefore, it is not unusual for dogs to wake up relatively early and stare, nudge, and jump on their owners to get them up and about. Some dogs even want to sleep on top of their owners, here’s how you can stop that.

If you own a puppy or energetic breed of dog that is bursting with energy, make sure that you exercise them thoroughly before settling them down for the night.

Some dogs can easily become restless when not receiving enough exercise during the day, lying awake for hours, and often pacing around the bedroom.

Similarly, dogs will commonly stare at their owners as they sleep to get attention. Our furry companions are intelligent creatures and know that they will often receive treats and attention by staring at us. If you wake to find your pooch staring intently at you, he or she might have been doing so to get your attention.

Typically, this will be because they are fully awake and eager to play. However, they may also do this if hungry or when asking to be let out into the backyard to relieve themselves.

Although it is not a serious issue to entertain your pooch from your bed, try not to make it a habit as they may begin to associate the bed with playtime. If you are not careful, this may lead to your dog regularly waking you up in the early hours in an attempt to initiate playtime.

The role of communication canine and human relationships

To better understand why dogs stare at us while we sleep, it is worth looking at how humans and their furry companions have learned to communicate with each other. Over thousands of years, humans and dogs have worked together, forming close bonds that helped them to carry out their tasks efficiently.

Interestingly, it is likely that humans and canines experienced some trouble understanding each other at the beginning of their relationship, with this causing issues when it came to carrying out hunting expeditions and other vital tasks.

However, over many years, both dogs and humans would have adapted to this barrier, slowly learning their respective body languages and other behaviors and passing this knowledge on to their descendants.

Naturally, this has led to us developing a shared common language that persists to this day.

How dogs communicate with their eyes

When it comes to communication in modern-day settings, dogs commonly use a variety of facial expressions and body positions to convey their emotions and intentions. For example, if you pay close attention to your dog’s eyes you might notice that they will narrow or open depending on the emotions they are experiencing.

In most circumstances, a dog will narrow its eyes when it is angry and confused and open them wide when anxious or frightened.

However, similar to humans, it is not always simple to determine their feelings through observing only one factor of their body language. Instead, you should look for multiple corresponding behaviors that will give you a better idea of how your dog is feeling.

For example, frightened or stressed dogs will commonly open their eyes wide, and then lower their body to the ground, cowering, lowering their tails, and backing away.

On the other end of the spectrum, aggressive or angry dogs will narrow their eyes, flatten their ears, and tense their bodies in preparation for a confrontation.

Similarly, lazy or tired canines may also narrow their eyes but instead move slowly and laboriously indicating that they are relaxed.

Paying close attention to the shape and size of your pup’s pupils can also give you an idea as to their mindset.

In general, a dog’s pupils will dilate when they are experiencing fear, excitement, surprise, stress, or pain.

Interestingly, this trait exists to allow increased amounts of light into their eyes, helping their brains to process visual information and aiding them in dangerous situations.

Why do dogs stare?

There are many different reasons why dogs stare at other dogs and humans. In some cases, usually, only when it comes to their owners, dogs will stare at you in an expression of love.

This behavior is very similar to how humans show affection to each other and is likely a by-product of thousands of years of cooperation between our species.

Furthermore, according to many studies, mutual staring between dogs and humans releases oxytocin, a famous hormone known for its importance in both romantic and platonic relationships.

On the other hand, dogs find prolonged eye contact with each other threatening. Wolves will often stare down members of their pack to pressurize them into submission and this often occurs when fighting over food or mates.

Many of these traits and behaviors have carried over to our domesticated dogs, resulting in their shared dislike of prolonged eye contact and other negative behaviors.

Dogs are strange creatures, that is for certain. Commonly, canines display a wide variety of weird and unusual behaviors, with many being unique to each respective personality.

For dog owners, these strange traits are often amusing, regularly being shared via smartphone video on and offline, and occasionally raking in thousands or even millions of views.

The sleep staring is one such trait, but most of the time it can be explained away by simply happening when you move slightly.