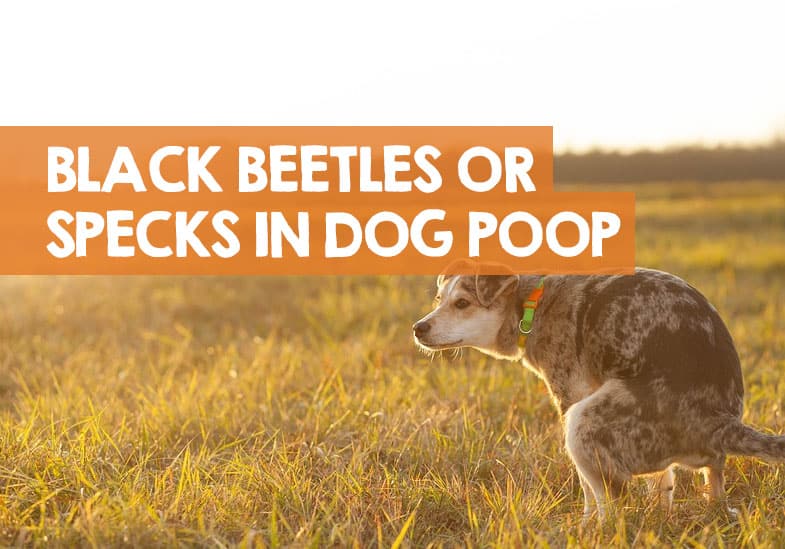 Talking about your dog’s poop can be fascinating or downright off-putting! Either way, if you notice there are little black bugs in your dog’s poop one morning, it’s something that will be hard to ignore. What look like black beetle bugs in dog’s poop is a really disturbing sight and not one you will want to see again.

Thankfully I’ve not seen this too often but seeing black bugs in my dog’s poop once was enough. And it was enough to make me investigate what these poop-dwelling beetle bugs are. I researched online and spoke to a vet and here’s what I discovered.

Why are there black bugs in my dog’s poop? Reasons for small black bugs or specks in dog poop can include spots of blood turned black, something the dog ate, black ants, or dung beetles. There is no one explanation, so further investigation will be required.

As nasty as it sounds, you will need to look closer into what the black specks are in the dog’s poop. Firstly, make sure it’s definitely black bugs and not black specks caused by something your dog has eaten or even spots of blood which can look black.

Worms and fly maggots can also be found in dog poop, but they don’t resemble black beetles. The black bugs could then be dung beetles or black house ants.

Yes, even dung beetles! Who would have thought these amazing beetles would want to munch through your dog poop? They’re found throughout the United States and other countries such as Australia, Mexico, and South Africa.

I did quite a bit of research online about this fascinating subject and was surprised to see there were many dog owners searching for an answer. Read on as I share my discovery about what these little black bugs or beetle looking specks in your dog poop means.

What are the black bugs or beetles in my dog’s poop?

Whenever your dog poop looks different, it’s a good idea to keep an eye on it for a few days. Most times a change in dog poop color and texture is caused by something your dog has eaten – pumpkin is a classic example.

Changes in color to what looks like little black beetles in your dog’s poop can also be caused by a change in their diet.

Dark specks in dog poop can be a sign of parasites or even blood. Always get this checked out by the vet if you suspect this to be the case.

You may find worms or even fly maggots in your dog’s poop, but they don’t resemble little black bugs. Often pet owners will report white dots in their dog’s poop too.

The next most obvious (though not as obvious for most of us) reason there are black bugs in your dog’s poop is an invasion of dung beetles or even black house ants. Now, black house ants are tiny and quite easy to identify.

Dung beetles are not as common for many of us, so we may not recognize them first time around. And they come to your dog’s poop. They don’t normally go through your dog’s digestive system unless he’s been munching them which is highly unlikely.

I have seen similar behavior with slugs. If you have ever seen slugs on dog poop, it’s because they actively seek it out. Not because the dog has eaten slugs.

What are dung beetles?

So, the black specks in your dog’s poo could be dung beetles.

The first time I heard of dung beetles was on National Geographic when they showed this fascinating beetle rolling elephant dung somewhere in Africa. It’s only recently that I realized dung beetles can also be found on every continent except the Antarctica (not surprising considering it’s so cold).

Dung beetles feed on feces (hence their names) although some will also feed on rotting leaves and fungi. They come in various sizes and some fly while others don’t. There are three types namely:

Dung beetles can eat more dog poop than their own weight within 24 hours. Some species are known to roll enough feces into the size of an apple!

Believe it or not, they can navigate using the Milky Way (source: NatGeo). With over 5,000 species of dung beetles in the scarab family, you’re bound to have a few flying around your neighborhood waiting to get into your dog’s poop as black specks or beetles.

Dung beetles belong to the scarab beetle family and have a 3-segment hard-shelled body and 6 legs. They also have antennae. The next time you see black bugs in your dog’s poop, take a closer look. If the bug’s shape is round, dark brown, black or a metallic green, with a hard shell then you’re likely to be looking at a dung beetle.

These beetles can also be known as litter beetles or bugs, pooh beetles, tumble bugs, and occasionally are called feces fighters. They’re generally not a nuisance and there’s no need to bring out the insecticides.

What does it mean when black bugs are in my dog’s poop?

When you see a whole lot of black bugs moving on or in your dog’s poop you may wonder if they’re really are dung beetles. After all, aren’t these critters quite large bugs?

Dung beetles vary in size and you can get really small ones that only measure a mere 5mm. Others can be as large as 3 centimeters.

If you know for sure these are little black dung beetles invading your dog’s poop, then they’re foraging for food. Yes, even your dog’s poop is full of nutrients for other beetles to enjoy.

Together with the moisture content found in dogs’ poop, there’s nice, juicy nutrient-filled food for dung beetles to eat.

How many times have you left your dog’s poop for the day or overnight only to find it’s disintegrated by the next day? This is often a sign that dung beetles or even black house ants have been devouring on it, leaving very little to be scooped up.

Which doesn’t give you the excuse to leave dog poop lying around! It’s still unhealthy to leave dog poop in the garden (or anywhere else including the dog park) and while dung beetles will clean it up, they’re not always around to do the job.

Do I need to worry about black bugs in my dog’s poop?

Dung beetles are attracted to most animal waste. And this includes domestic animals such as our dogs, cattle, horses, chickens, and even cats. They can pick up the scent from miles away and are strong flyers, so they’ll find their way to a dung pile anywhere.

Do you need to worry about finding little black bugs in your dog’s poop?

Not if you know for sure they’re dung beetles. These creatures are harmless and are simply getting on doing what they do best which is eating dung. They may also be laying eggs in your dog’s poop.

In fact, dung beetles have been deliberately introduced to countries battling with fly infestations Flies like to lay eggs in dung so by having the dung beetles roll up, bury, and eat dung, their removing the source of egg-laying material for flies.

Did You Know? In 1995, Australia introduced 25,000 dung beetles into the Warringah council of Sydney as an experiment to recycle dog poop. I imagine a lot of black bugs were found in local dogs’ poop in the area for quite some time.

But, if you’re not sure it’s dung beetles that you can see in your dog’s poop, then take a sample to your vet. They’ll be able to confirm if it’s indeed these feces-scavenger creatures or something else is causing black bugs to be in your dog’s poop.

Strange things will often be seen in dog’s poop, but often it can be down to what they ate. Little black specks though should be investigated in more detail as it could be dried blood specks.