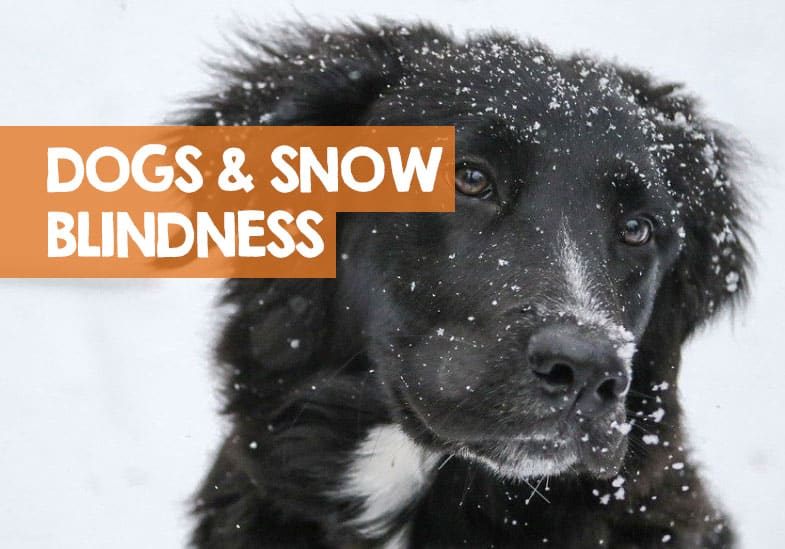 As the winter has just passed, I wanted to talk a little bit about the dangers of snow and sunlight to your dog. This came to mind during January when I took our dog Claude out to the local forest. I started to notice him squinting, especially when the sun was at its peak. It made me wonder whether dogs can go snow blind… I spoke to an expert, and here’s what she said.

Can dogs get snow blindness? Dogs do get snow blindness (also known as photokeratitis), but it is very rare due to them having more pigment in their irises than humans. However, there have been documented cases where dogs have suffered with the UV glare from the sun and snow, leading to eye problems.

I actually found a quote from an academic specializing in eye conditions; Henrik Forsius, Professor Emeritus of Ophthalmology, in Helsinki, Sweden, said this in 2009:

“Animals, living in the arctic cannot avoid snow blindness. Nordenskiöld observed this in hares and Kennedy in dogs. Even seals can be snow blind, but not birds, even flying beyond an elevation of 5,000 meters. Chickens have been shown to receive very large doses of UV light at 254 nanometers, the most critical wavelength.”

He went on to say that snow blindness in dogs is more dangerous in the Arctic for the following reasons:

“In the arctic the sky is free of dust and moisture. I have read reports that arctic explorers have been snow-blinded even at a sun elevation as low as 12 degree. The situation is especially dangerous, if the explorer thinks that a light cloud cover will resorb the UV light. For the explorer, it may also be tempting to take off the sunglasses while engaged in hard physical work.”

Based on this, it’s reasonable to say that dogs can go snow blind – but what about husky dogs? Can huskies get snow blindness? You will have to wait until the conclusion to find out.

What is snow blindness in dogs?

Dogs can get snow blindness just like humans. It’s a painful loss of vision due to over exposure to the sun’s harmful UV rays. In simple terms, it’s just like a sunburnt eye.

People often compare it to that experience when you wake up and suddenly the curtains are pulled upon. You will feel discomfort and will need to cover up your eyes.

It’s exactly the same for dogs; when you take out your dog on a walk when it has been indoors for a long time, it will take time to adjust to the sunlight.

Snow blindness is caused by an acute overdose of UV light. Another very common, but little-known form of photokeratitis (chronic photophtalmia), was first described by Lugli (1935) in Italy and by Freedman (1965) from Northern Canada.

The initial sign is superficial degeneration medially and laterally in the limbus of the cornea, and it has been long documented in people the world over.

In populations such as the Inuits and Lapps, the degeneration can cause partial central opacification in the cornea. People, living in tropical regions with white coral shores, as along the Red Sea, can even be blinded.

Symptoms of snow blindness in dogs

Do dogs need eye protection from the snow and sun?

To be completely on the safe side, I would recommend snow goggles for your dog. Whilst I think it very unlikely that dogs will get snow blindness in most Western countries, there’s no harm in being overly cautious.

The biggest challenge is size and comfort as dog sunglasses are easy to shake off if not fitted correctly.

How can I protect my dog’s eyes?

If you are concerned about the possibility of your dog getting snow blindness, I would invest in dog goggles.

Here are some of the best recommendations to help your dog battle snow blindness.

Handy Hint: Dogs love playing in snow, and there are some good reasons for why they like it so much… which I’ve listed here.

After talking with specialists and doing my own online research, I think dogs can get snow blindness, but it’s probably quite rare. For example, you don’t see huskies wearing goggles, so husky dogs don’t get snow blindness surely?

According to husky experts, it due to the dark fur around their eyes which absorb UV rays… but most dogs don’t have that!

However, it can happen in certain situations, so to be completely on the safe side, invest in some goggles for your dog, knowing they won’t get any strain on their eyes.