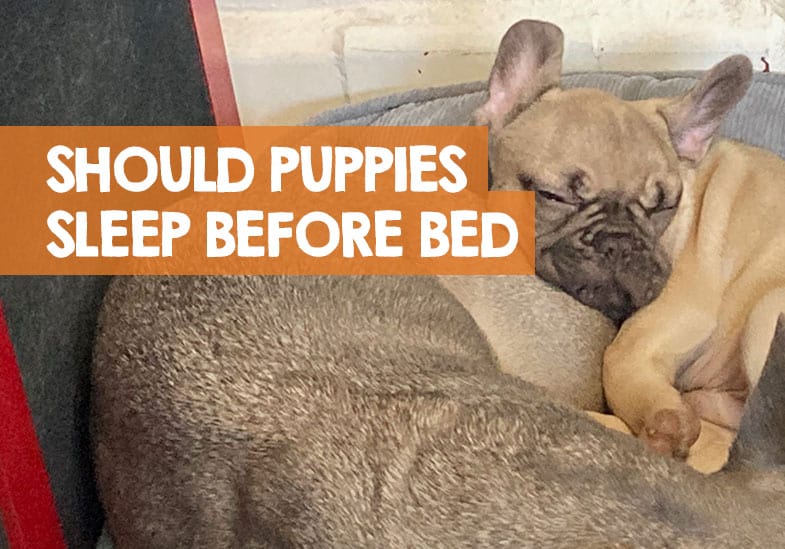 Puppies are a bundle of hectic activity, followed by lots of sleep. With a growing body they not only need to take on plenty of calories, but also needs lots of sleep due to the high activity levels. If you’re a puppy owner and are struggling to get your puppy settled at night, you might be wondering if you should stop him sleeping before bedtime – here’s what you need to know.

Should I let my puppy sleep before bedtime? No, you should not let your puppy sleep in the few hours leading up before bedtime. If you do, he might be energetic when it’s your time to go to bed, and when he should be learning a bedtime routine too.

If you let your puppy sleep before bed it will disrupt his routine and mess up your schedule, leading to potential ongoing bad habits. You need to stick to a strict bedtime for all nights and try to wear him out before bed.

The full story on why you should avoid letting your puppy sleep in bed before bedtime is below, with tips on getting that to sleep. Plus, what if they unexpectedly fall asleep early, should you wake them up? What’s the ideal time to get them to bed? If these questions race through your mind as a puppy owner, I’ve got you covered.

Why puppies sleeping before bedtime is bad

Here’s one thing we can agree on: Puppies are creatures of habit. They look and act better when under a routine. This includes regular feeding, walks, play, and… sleeping (but not before bed).

For this reason, you need to stick to a consistent sleeping time for your puppy. Don’t make it a habit of taking them to sleep earlier than their usual bedtime.

Sometimes, your puppy will crash out before bedtime. This may happen if they’re sick or too exhausted from playing (we all know our tiny furry friends can act like miniature tornados when they want to).

If your pup appears unusually tired, it’s okay to let them sleep earlier — no need to force them to stay active and awake just so they’d get to bed at the scheduled time.

But letting your puppy sleep before bedtime shouldn’t be a regular thing — especially if they’re not unwell — and you can ensure that.

Handy Hint: Here’s why you might notice your puppy breathing fast in his sleep and when to be worried about it or not.

How to stop your puppy sleeping before bed

1. Avoid too much playtime when you wind down for the evening

It’s likely that your pup already uses up so much energy engaging in other physical activities during the morning and afternoon hours. If you play with them too much in the evening, they’ll be extra tired and will probably fall asleep before bedtime.

Your pup knows how much sleep is enough for them during the day. That’s why they sleep a lot and wake up when they feel they’ve had enough.

Typically, puppies have multiple daytime nap sessions that can take anywhere between thirty minutes to three hours per session. But if your pup’s nap goes beyond three hours, no need to worry — they just want to rest some more.

When they’re having their power naps, don’t interrupt them. If you make the mistake of constantly disturbing them as they sleep, they may fall asleep before bedtime to compensate for the sleep lost during the day.

This will happen if you let your puppy sleep at their usual time, not earlier.

On average, puppies feel well-rested after getting around 10 hours of sleep at night. If your puppy sleeps more than this, then read this checklist to make sure there are no other issues at play.

Although there isn’t an “exact time” for dog owners to put their puppies to sleep at night (it’s upon you to create a schedule that will work for you and your pup), what truly matters is ensuring that your pup’s bedtime is the same every night.

If you decide their sleeping time will be 9 pm, try your best to let this be the case with all other nights. As your puppy’s body adjusts to this sleeping routine, life will be easier for you and your bundle of furry joy.

Here’s what I mean:

You will sleep better

When you put your pup to sleep at the same time every night (in sync with your schedule) and not before time, they won’t wake up earlier than you.

Allowing your puppy to sleep before bedtime means they’ll be up before their usual time. And probably you’ll still be asleep.

You can only guess what will happen if they are awake before you — they’ll do everything (annoyingly) possible to alert you to attend to them.

And just like that, your chances of enjoying your sleep and waking up well-rested will be ruined!

If you repeatedly take your puppy to bed before the usual time, you’ll interrupt their next day’s potty break routine, feeding routine, and daytime nap routine.

If you develop a habit of taking them to sleep earlier than the time they had already gotten used to, that means you’ll blow up their entire routine.

For instance, when they sleep earlier than the normal time, they’ll be up early, which means they may want to feed, go out, and take potty breaks earlier than you least expect.

Worse is, their schedule will end up being inconsistent with yours.

When you follow a strict sleeping time every night, you’ll minimize your puppy’s risk of anxiety or stress — which often occur if a pup’s routine is inconsistent.

Look at it this way:

Suppose they find themselves awake at early hours because you’re repeatedly getting them to sleep earlier than usual.

In that case, the confusion of not knowing what time you’ll take them to play outside (if they are the outdoors type), what time you’ll feed them, and when to take their bathroom breaks can make them anxious and stressed.

Handy Hint: I don’t recommend you let a puppy sleep in your bed and for good reasons, here’s why.

Should I keep my puppy awake until bedtime?

It’s a good practice to let your puppy stay awake until it’s time to sleep. That way, you’ll be training their body to adjust to the scheduled sleeping time.

However, there might be days when your puppy seems quite tired and sleepy — maybe because they’ve played a lot or aren’t feeling okay.

When that’s the case, you don’t have to keep them awake when they clearly need some sleep. But don’t let sleeping before bedtime become a habit, particularly if they aren’t sick.

Fortunately — as mentioned a little earlier — there are some steps you can take to ensure your healthy furry friend stays awake until their time to sleep comes.

What time should I put my puppy to sleep?

Truth is, there’s no specific bedtime for puppies. But most pups need at least 6-10 hours of sleep every night.  It’s up to you to create for your puppy a sleeping routine that’s in sync with your schedule.

To give you a rough idea, how about an example. If your routine includes sleeping for eight hours every night, you can put your puppy to sleep when it’s also time for you to get to bed. That way, you’ll both wake up at almost the same time.

Whichever bedtime you settle on for your puppy, try as much to remain consistent for all other nights.

What do I do if my puppy sleeps before bedtime?

Honestly, there’s nothing much you can do other than just allow them to continue sleeping. They’re probably too exhausted to stay awake.

But the good news is, you can prevent this from becoming a habit. That is, by ensuring you don’t engage your puppy in excessive play a few hours before their scheduled bedtime (if you do, you’ll make them more tired, and they’ll fall asleep earlier than their usual bedtime).

Plus, don’t distract them as they’re having their daytime nap (they may end up dozing off before bedtime to recover the lost daytime sleep)

Should I stop my puppy from napping?

No, you don’t have to stop your pup from sleeping if it’s obvious they’re too tired and want to get some rest.

Should you wake up a sleeping puppy?

If your puppy is trying to sleep before bedtime, then yes you can wake him up gently. If the puppy is in REM deep sleep, be careful though, as they are in a dream at this point and could be scared if startled.

It’s a few minutes past 7 pm, and there’s your pup, lying lazily beside you on the couch, barely unable to keep his eyes open. You’re torn between getting him to bed already — two hours away from their usual sleeping time — or waiting until bedtime.

If this dilemma sounds familiar, then you’re not alone.

The conclusion is you should not let your puppy sleep before bed if you want to get them into a routine where they are well rested… and you rested too!