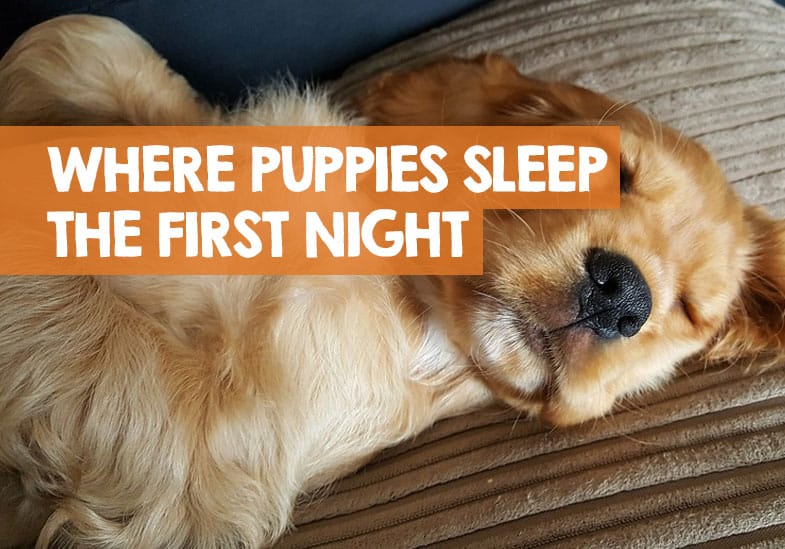 Unless you have bought a guard dog to patrol the outer perimeters of your property, unsupervised, you will want to bond with your new pet. In order to do so, you need to gain its trust. Gaining a dog’s trust can start from the moment you decided where a puppy sleeps on their first night.

Get it right on the first night home, and it could mean you’re making your life and that of your puppy’s a lot easier in the long run. Here’s the short answer first, followed by detail on how long they should sleep in your room and the best place for them.

Where should a puppy sleep the first night?

Where the puppy ultimately sleeps on the first night home is dependent on your house rules. Even if your dogs sleep in your bed at night, it makes sense to let the new puppy sleep in its own bed, until you are both used to a routine.

Whether or not you have a restful first night and subsequent life with the dog, will depend on how the dog is adjusted to its new situation, circumstances and regimen. That won’t always related to where the puppy slept the first night home, but more about how well you help them to adjust to the home.

This adjustment starts with introduction to the humans and pets in the household, and its new surroundings. This needs to be done in stages so as not to overwhelm the dog.

A light meal, brief exercise and a pee break or two should precede a period of calm, preferably in or around the puppy’s new sleeping place. Hopefully, it will feel tired and relaxed, and fall asleep of its own accord.

Be prepared, however, for a night or more of interrupted sleep while the pup adjusts. For the convenience of the household, it would make sense for the puppy to sleep close to its carer, initially.

What we did the first night home

When we had our puppy Claude home for the first night, we put his crate at the foot of our bed. We didn’t want him to be completely alone, as felt that would be cruel and traumatic for him. We put the crate in our room, turned the lights down, and placed him inside.

Should you close the puppy crate at night?

Yes, we did… if we hadn’t he would have been out of it on first night causing mischief.

The first night or two was hard. He cried a lot and we had to soothe him. After a couple of weeks we moved his crate to the kitchen.

Timing of the acquisition

To successfully transition your new pup into a happy and compliant house pet, requires time. It would probably make sense to start the process of integrating the dog into the household, as early as possible in the day, preferably at the beginning of a weekend or a vacation.

This will allow you time to devote to settling the dog into the beginnings of a routine. It will also allow you to rest after periods of interrupted sleep.

Introduction to family and pets

The first adjustment your puppy will have to make is interacting with you and your family. Puppies are crafty critters that can easily wrap you round their little paws. Interestingly, you might also see some jealousy developing, particularly around babies.

And the chances are high that someone in the household will be complicit in this. There could be several volunteers willing to sacrifice a corner of their bed for a new friend. Numbers may diminish, however, if you explain the effort required to ensure that the pup does not fall out of the bed or have a wee accident in it.

Having run the human gauntlet, it is time to introduce the pup to any other pets you may have. The best way to do this is to introduce dogs on neutral territory, say a nearby park. Then, once they have met, and hopefully started playing, bring them home together.

Cats are unpredictable and may see the new canine as an intruder and a lifelong challenge, or it may embrace it with all four paws. Good luck with that.

Like the humans, the encumbent pets will need to pace themselves so that the youngster is not traumatised or exhausted. Moderation is a good policy.

The puppy will no doubt want to explore its new surroundings. Allow it to do so under supervision so that it doesn’t come to any harm, or get lost!

Be alert to any body language that suggests it may need the ablution facilities. Take the pup out to a designated spot and praise it while it does its business so that it knows what to do in the future.

Puppies, like crawling babies, explore the world with their mouths. They are also notorious for causing destruction with their chewing. Puppy-proof the environment so that they and your belongings stay out of harm’s way.

No doubt your pup will be hungry after the introduction and exploration. Show it where it can get water, on demand, and where the regular meals are served.

Make sure it doesn’t monopolise the other pets’ bowls and thus antagonise them, or overeat by devouring all their food.

Try to give the pup a small portion at night so that its digestive system doesn’t need elimination halfway through the night. Also, remove the water bowl in the evening, for the same reason.

Handy Hint: Here’s a helpful guide about when the best time to feed a dog before bed is so they get a good night’s sleep.

Hopefully, the puppy’s breeder will have initiated the potty training process. For the first night, it will make sense to continue with the practice.

If not, try to establish a pattern of behaviour well before bedtime by taking the pup for its ablutions a number of times throughout the day. Reward the pup for getting it right.

Be prepared to be proactive and wake the pup up once or twice during the night to prevent any spillage. This may need to continue for the first few weeks, until the pup learns to alert you when it needs to go outside.

After 3-4 months, the pup should sleep through the night without incident and life will be so much easier.

Sleeping throughout the day

Puppies sleep a lot! They can be running around like a March hare one minute and fast asleep the next. Try not to let your pup get overstimulated or overtired.

Allow it to sleep when it needs to throughout the day. This will be an opportunity to introduce it to its sleeping place.

Try not to let the pup sleep throughout the evening so that it will sleep well at night.

Before putting the pup down to sleep, play with it a little without creating too much excitement. Take it for a short walk and bathroom break. Hopefully this will tire it out a little.

As far as possible, create a calm atmosphere in the area where the dog will be sleeping. Essentially, you need to wind the dog down for the night.

Do not invest in bedding that is too expensive. This will probably not be its final sleeping space, and it may destroy whatever you give it out of boredom or frustration.

A soft toy may provide physical comfort. You could try wrapping a ticking clock in a small blanket to simulate its mother’s heartbeat.

Dim the lights slowly and do not leave the pup alone until it has fallen asleep.

Handy Hint: If puppies sleep too much in the day, they will struggle to sleep at night. As part of that, make sure they don’t sleep before bed.

Dealing with whining at night

Your pup is most likely going to whine for the first night or so when the lights go out because it will be disoriented, especially if it sleeping on its own.

If your other pets sleep on the bed, you will have some additional explaining to do when it sees its new found friends slip under the bed covers. It is remarkable how fast pups develop an air of entitlement, and sense of fair play.

Regardless, it is not fair to the young dog to ignore its cries for help. Therefore, it make sense to keep the pup close to your bed or bedroom so that you can get up and see to its needs.

You do not want to create a long term stimulus-response situation, i.e. more than a week, whereby each time the dog whimpers, you rush to its side. Hard as it may be, you need to ignore the plaintive cries once you have satisfied yourself that the dog is not in dire straits.

Once it derives comfort from its bed, you will be superfluous to requirements and you can each happily go your separate ways at bedtime.

Did You Know? It’s perfectly normal for puppies to breathe fast when they are sleeping. Here’s why it happens.

I remember when we brought Claude home this first night. It was hard, he was crying constantly, and it’s easy to understand why. A new puppy in a new home will be experiencing many changes. It won’t know where to sleep, where its food is and where it can go potty.

It will probably have left its mother and siblings and be feeling lonely.

Confusion will lead your puppy to feel defenceless and no doubt lead to whimpering or loud wailing. The first night could be overwhelming for both of you so is not the best time to start disciplining the dog.

The key is to let the puppy sleep their first night where it feels right for you.