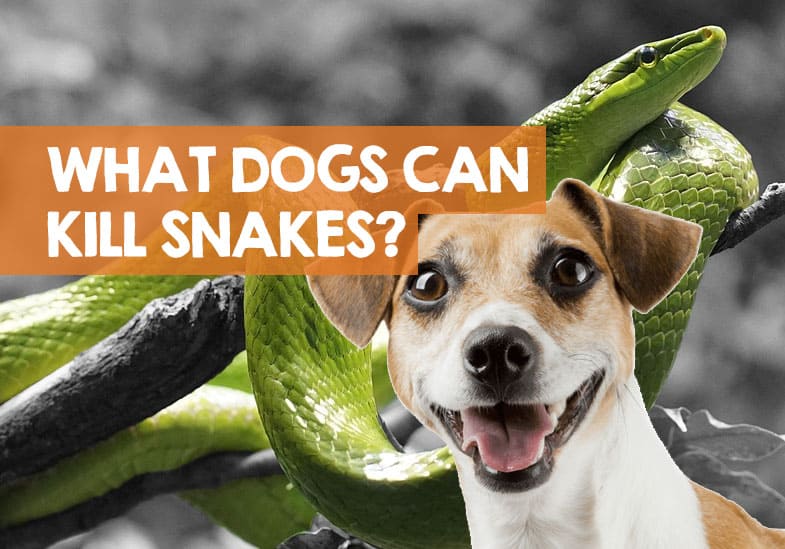 Before I get into the research I’ve found, please note that the majority of snakes found in North America are not poisonous to dogs. But there still will be some snakes that can kill your dog, so I do not recommend you let your dog anywhere near snakes.

However, if you are looking for information on what kind of dog kills snakes, and the certain breeds that are more inclined to keep reptiles at bay, you might find what I’ve discovered interesting.

I spent a couple of hours researching what breed of dog can kill a snake and packed it up into one helpful guide to answer all your questions about snake dogs.

Dogs can kill snakes and it’s not at that unusual to find people who use dogs to keep snakes away from their properties. However, there are no breeds of dog that have been specifically bred over time to kill snakes, but some breeds will be more inclined hunt and kill reptiles than others.

Breeds of dogs that kill snakes

However, there are certain types of dog breeds who will be more inclined to chase and kill snakes. Typically, the breeds of dog that kill snakes would be ones such as:

You will notice that there are a lot of terrier breeds in there. Terriers will hunt anything and have been purposely bred to hunt smaller animals like rats and mice. This makes them the perfect snake killing dog, as it’s in their genes to hunt and kill small moving animals.

Why terrier dogs are good at killing snakes

The reason why terriers could be great snake dogs is the way they have been bred and their physical attributes, for example:

The name terrier is derived from the Latin word “terra” which translates as Earth. It’s relevant here because terrier dogs were trained and then evolved to hunt for animals that live underground.

They are able to dig out burrows and holes in the earth to force or pull out rats and snakes from their holes.

2. Terrier dogs have boundless energy and are fearless

Terriers are small and full of energy which lets them quickly spot a snake, give chase, and if the snake goes to ground, quickly tear up the earth to get at it.

They are also known to show no fear and require little no encouragement to give chase to their prey.

You can imagine how well they might hunt and kill snakes based on this heritage! This makes them perfect as the kind of dog that kills snakes, or at least, are most likely to want to catch and kill a snake.

How terrier dogs can kill snakes

Whilst researching the topic of snake dogs, I stumbled across an archived story on a now deleted blog, which detailed a guy’s terrier finding and killing a snake.

As the blog is no longer live, I’ve chosen to quote a lot of the person’s comments below. If you want to see the original, it’s available on the Internet Archive’s Way Back Machine.

“Ally, the little Jack Russell terrier, had found a huge canebrake rattlesnake by the swimming pool. Her bark, different when a rattler is encountered, alerted me to her discovery. She circled around the snake until it had to adjust its body to face the dog. Finally, she saw her opening and grabbed the snake, immediately shaking it violently before throwing it to the ground.”

“After seeing the snake was injured, she repeated this action until the snake was dead. She has learned how to safely dispatch these creatures without getting bitten so far. She seems to know the difference between rattlers and other harmless snakes as evidenced by her bark.”

“The number she has killed is unknown as she freely roams hundreds of acres of woodland harboring many of these creatures. Ally is a snake dog. A valuable and loved member of our family. We worry about her safety, but she has a mind of her own when it comes to her inborn instinct to kill snakes.”

What make a good snake dog?

This old deleted blog post I discovered also included some tips on why the person thought some dogs kills snakes better than others. Here are more quotes from the defunct blog post:

“There is no breed of dog called a snake dog of course, but there are breeds better at this ancient ritual than others. Almost all dog breeds have individual members which are good at killing snakes.”

“But being able to kill a venomous snake without being struck is the difference in being a successful snake dog, and one which may or may not make it to the vet. In some sections of the country this is not important because of the scarcity of dangerous snakes, but this is not the case in southern Georgia and northern Florida.”

“Of course, there are dogs who won’t give snakes a second look, if they see them at all. There are some dogs which may try to kill a snake but are not fast enough to avoid being struck by the lightning fast rattler. Other dogs may attempt to play with the snake not knowing of the danger involved.”

How a dog kills a snake

“A dog’s technique for killing snakes seems to be hereditary. The instinct to violently shake a snake repeatedly disrupts the nervous system of the snake by injuring the delicate spine running the length of the snake. This prevents the snake from striking in the direction of the dog. The danger to the dog comes while trying to seize the snake. A good snake dog will wait for the right opportunity before attempting to kill the snake.”

“Jack Russell terriers are very good as snake killers. Their speed and intelligence allow them to avoid getting bitten until a chance to grab the snake presents itself. But even these dogs get bitten occasionally. Fortunately, there are vaccines available for dogs that live in rattlesnake infested areas. Although this vaccine was developed for the western diamondback rattlesnake, this vaccine may help if your dog is bitten by other rattlesnake species. Not enough is known about this vaccine yet to tell how effective it is in preventing death or serious injury to dogs.”

“How does one find a snake dog? This has to be by word of mouth in most cases. In most rural areas a good snake killing dog is well known to the locals. Obtaining a puppy from known snake killing parents is the best way to assure the dog can dispatch a snake. Even then some will not be good at this task. It’s hard to teach instinct and caution to a dog if they are the impetuous type. This is another reason to obtain the vaccine for your dog. Some dogs develop an immunity to rattlesnake bite by getting struck several times and surviving the resulting injury. Some never have a second chance.”

Is it possible to train your dog to kill snakes?

You’re not going to have your dog patrolling your yard fencing actively looking for snakes to kill. They won’t have that level of snake hunting skill.

But what they will do is see a snake, give chase, and possibly catch and kill it. To encourage this behavior, you can use classic action and reward type training – just like hunters do to get their dogs to bring dead birds back to them.

However, you do run the risk of your dog suffering with snake bite injuries. In areas where venomous snakes inhabit, this could be fatal to your dog.

Can dogs get hurt from killing snakes?

Snakes will and can hurt dogs, and bites are very expensive to treat at the vets. Dogs can get infections from snake bites, and of course, could even die if the snake was venomous.

Once your dog gets bitten, it might also mean he no longer has the desire to chase and kill snakes. It means, after one bite, your snake killing dog might retire himself for understandable reasons.

Rather than take the risk of your dog getting bitten by a snake, or getting ill from eating one, you could do some things to prevent on your property. This is less risky than getting your dog to kill snakes in my opinion.

Snakes thrive in messy environments and like to hide in places. If you have junk in your yard, then it makes for the perfect place for a snake to get under. Woodpiles are fantastic places for snakes to hide out.

Mess and debris, particularly food or animal waste, will attract rodents. This means if you’re feeding your dog outdoors, keep the food bowls cleaned and replaced daily. The same goes for bird feeders.

If rats and mice do enter your yard due to the mess, this will in turn attract snakes looking to hunt and feed on them.

Keeping mowing your lawn as it grows through the summer. This will help to keep snakes away rather than trying dog poop. The reason why? Snakes like the cover that long grass offers them.

When grass is short, snakes cannot move freely without attracting the attention of predators. It will also help you to spot them before treading on one!

Snakes like to get to water, and whilst it might be impossible to remove a pond or stream from your yard, you should get rid of any other accessible water sources. This means cleaning up any damp areas, such as tarpaulins where water can gather, or a kids’ paddling pool.

You might also want to consider not watering your lawn. Wet grass will attract worms, slugs, and frogs which snakes like to feed on.

No dog breed is bred to kill snakes, but certain types of dog are more likely to do it.

However, given the chances of snake bites, it’s not something I would personally recommend, instead looking for alternative snake deterrents.

I’ve written about other topics relating to dogs and snakes that you might also enjoy reading.

link to Should You Let Your Dog Hump a Toy or Pillow?

OK, so today’s article is a little humorous in places, but there are some real issues that can become problematic… it’s all about dog humping their toys and pillows. Have you seen your dog do...

Continue Reading
link to Why Isn’t My Dog Affectionate Anymore?

If you’re currently going through a phase where your dog does not want to be around you anymore or is no longer being affectionate, then I hope these notes will help you. It’s not that uncommon...