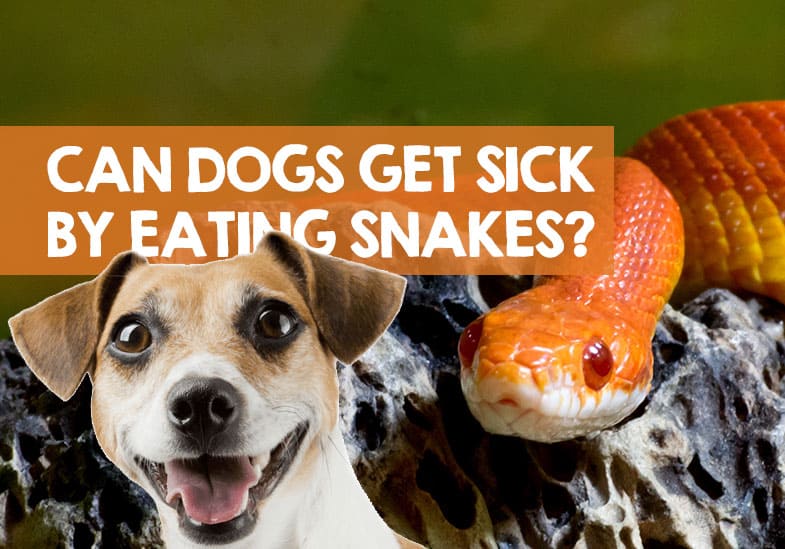 Some dogs will be attracted to snakes due the movement, particularly certain breeds of dog which I’ve listed further down the page. If your dog goes on to catch a snake and eat it, you should be rightly concerned about what the consequences could be.

In today’s guide I will explain the risk of dogs getting sick from eating snakes, and what happens if a dog eats a snake, plus what to do. It’s makes for interesting reading, and also includes details on garden snakes, copperheads, and black snakes.

Can dogs get sick from eating snakes?

It is possible for dogs to get sick from eating snakes, but the level of sickness will vary depending on the type of snake, and the health of the snake that was eaten.

For example, if the snake is venomous, but it did not bite your dog, then most probably, your dog will be safe from the venom. Venoms are toxic when injected into the skin through a bite or a sting but are usually not harmful when swallowed.

However, if the snake is poisonous, then eating the snake can make your dog very sick and could even be fatal. An example of a poisonous snake is the garter snake which is not venomous but stores in its body the toxins from the newts and salamanders it eats (read source).

Handy Hint: Even so, dogs can still survive even a bite from a rattlesnake, providing quick treatment is sought. Here are some statistics on the dog survival rates.

If the snake is not venomous and not poisonous, your dogs can still get sick from eating it if the snake is a carrier of disease.  Snakes can harbor bacteria such as Salmonella, and parasites such as the tapeworm Spirometra and the roundworm Gnathostoma.

Dogs with a Salmonella infection usually will not display any symptoms but may transmit this disease to their humans. Rarely, dogs may develop symptoms such as diarrhea, fever and chills, lack of appetite, and weakness which may require hospitalization. Treatment includes antibiotics and hydration.

Spirometra infection is common in the southeastern and Gulf Coast states but infections have also been reported in Hawaii, New Jersey, New York, and Pennsylvania (view source).

Cats and dogs are infected when they consume amphibians, reptiles birds, and mammals harboring this parasite.  Symptoms of infection include diarrhea, weight loss, and vomiting which usually respond to treatment with antihelminthics.

Rarely, the parasite spreads all over the body and progresses into a more serious and fatal condition called proliferative sparganosis.

A particularly chilling case of a dog getting sick from eating snakes was reported in a 21-month old female Border Colie in Tampa, Florida. The dog developed weakness of the right front leg and bloating of the skin of the front legs, neck, and abdominal area.

Despite treatment, she had worsening fever and difficulty breathing until she expired. At necropsy, parasite filled cysts were found under the skin all over the body.

Then there’s gnathostome, a parasitic worm encountered mainly in Asia but has also been reported in Australia and Africa. If your neighbor owns an exotic pet snake, there is a possibility, albeit rare, that the snake has inadvertently carried with it this parasite.

It has a complicated life cycle that entails transferring from one host to another. Among its intermediate hosts are fish, frogs, toads, snakes, chickens, rodents, and primates. Dogs become infected and sick when they eat the intermediate host, in this case a snake.

The worm finally resides in the stomach where they proliferate and cause inflammation. Symptoms of Gnathostomiasis include progressive loss of appetite, vomiting, weakness, and weight loss.

What to do if your dog ate a snake and seems sick?

So, if your dog has eaten a snake and appears sick, observe him for the next 24 hours to 1 week. If he develops diarrhea, he may have contracted a Salmonella infection. If he develops loss of appetite or diarrhea lasting for several weeks or months, think of a parasitic infection.

Take your dog to the vet and give as many details as you can about the dog eating the snake and the sickness symptoms you’ve seen.

Can a dog get sick from eating a garden snake?

Most garden snakes are not poisonous to dogs, but they do like to emit a nasty smell when threatened and attacked by dogs. This could upset your dog’s stomach, meaning your dog could appear sick from eating or just being close to a garden snake.

As with any other snakes, there is a risk of bacterial infections and sickness.

My dog ate a black snake will he be sick?

Like the above, black snakes are not poisonous, but you should take your dog to the vet immediately after eating a snake to be sure all is safe.

My dog ate a copperhead snake will he be sick?

As far as eating a copperhead goes, it’s the same as other snakes. There could be the risk of bacterial infection, upset stomachs, and even a blockage in rare cases.

My dog ate a snake egg what should I do?

If your dog has eaten a snake egg, monitor them for sickness. Some cultures around the world eat snakes eggs, so the best we can do here is refer ourselves to the advice websites give about the risk to humans eating snake eggs… for example:

“Snake eggs are consumed by humans in different ways and these are eaten raw or semi-cooked or fully cooked. When considering the venomous of the oviparous eggs, it must be noted that the snake eggs have not become fully fertile. … If a raw egg is eaten then this may prove to be fatal.” (view source)

How to stop your dog eating snakes and getting sick

Now, before you blame the snake for any misdemeanor, bear in mind that snakes are not sociable creatures. Given a choice between a wide expanse of a grassy landscape near a quiet pond and your concrete encrusted home, your home will definitely not be on his list of places to go before you die.

It is the snake’s tragic fate that with urbanization comes the loss of its natural habitat. So, by force of circumstances, it has wandered into your garden in search of food such as rodents, slugs, and insect pests.

Think about this. Snakes provide natural pest control for free!

Most garden variety snakes are non-venomous. If you see one in your garden, leave it alone, the same way you would a bird pecking at insects in your flower bed.

But if it is a venomous snake, you need to inform the authorities so it can be extracted and transferred to a safe location i.e. safe for people and the snake.

How can you tell if the snake is poisonous? Now is a good time to get to know the snakes in your area.

Lastly, you may choose to snake-proof your garden and your home.

To snake-proof your outdoor area

To snake-proof your house

Some people will even consider using dog poop to keep snakes away.

If you find a dead snake outside your door or inside your house and you have a pet cat and a pet dog, chances are, the cat did it.

Studies on the origin of domestication of cats and dogs suggest that while mankind chose to domesticate the dog to guard their homes and help track down game, the cat domesticated itself and chose to hang out with mankind when human settlements attracted rodents, a favorite item on the cat’s diet.

The dogs eventually subsisted on what owners would feed him, while the cats remained as carnivores and continued to hunt for their food.

In an encounter between a dog and a snake, the snake will have the upper hand. Dogs investigate with their nose and mouth, making them more vulnerable to snake bites, while cats swat with their paws.

But some dogs will still try to catch them and then run the risk of getting sick from eating snakes.

Dogs breeds that will try to catch snakes

However, there are certain types of dog breeds who will be more inclined to chase and kill snakes – possibly getting sick. Typically, the breeds of dog that are more likely include:

If you can prevent them from doing so, don’t let your dog eat snakes as there is a slim chance it will make them sick. Most of the time, and dog won’t get sick from eating snake, unless it’s a highly venomous one, so when it does happen, consult with your vet.