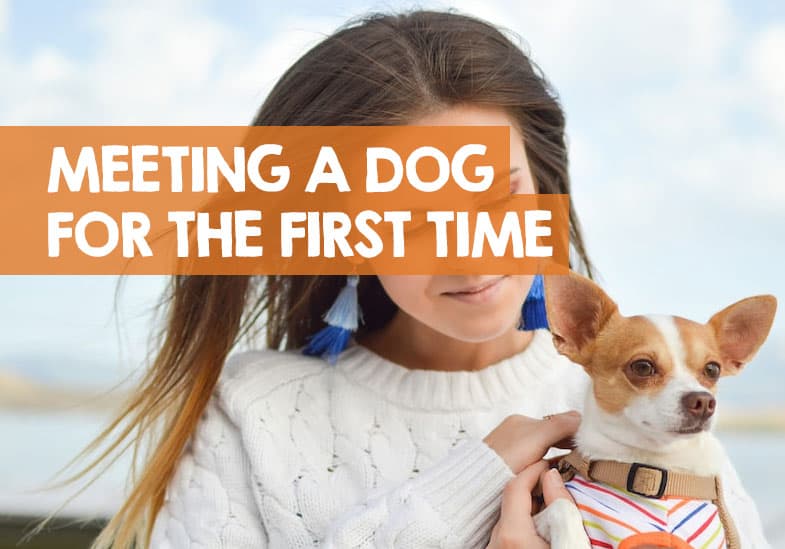 Whether it’s that cute dog at the mall you want to say hello to, or you’re meeting your soon-to-be dog for the first time in person, how you act around the dog will determine if you’ll have a successful meet-and-greet or go home with a bite.

If you’re not sure of the proper way to interact with a dog you’ve just met for the first time, then here are tips, starting with a quick primer.

When meeting a dog for the first time there are a couple of simple rules you should. For instance, seeking the owner’s permission, waiting for the dog to approach you, staying calm, and petting them correctly, to name a few.

Below you can learn more about how to act when meeting a dog for the first time. By the end of this article, you’ll know what to do (and what not to do) to ensure your first meet-up with a dog goes as smoothly as possible.

There are many things dogs appreciate from humans. For instance, friendly strangers who interact properly with them.

No matter how gorgeous a dog looks or how much of a “dog person” you are, it’s not okay to rush excitedly to a dog you’re meeting for the first time and shower them with hugs.

You see, dogs don’t think as we do.

Your idea of the perfect “meet-and-greet manners” when meeting a dog for the first time may be interpreted as impolite even by the friendliest dog.

You should view things from the dog’s perspective.

If you don’t “think like a dog” when interacting with an unfamiliar dog for the first time, your good intentions can lead to an unpleasant altercation.

But it doesn’t have to end this way.

Your first-time interaction with a dog you don’t know can go smoothly if you abide by the following simple rules:

You can never know how a dog will react when you get close to them for the first time. But their owner has a clue based on their dog’s past encounters with strangers.

So, before you hurriedly approach a dog you don’t know and extend your hand to pet them, ask the owner for permission first (and keep a short distance between you two)

If the owner doesn’t agree to your request, respect their decision, and admire the dog from afar.

They know best why you shouldn’t interact with their dog, so don’t throw the “I’m a dog person” line and rush towards the dog — you may be in for a “bitey” shock!

2. Stay calm and avoid showing too much excitement

The more relaxed you are when meeting a dog for the first time, the calmer the dog will feel about your presence.

Dogs can sense our emotions, including fear. If a dog detects negative energy from you, this can put them on guard and make them hesitant about interacting with you.

Similarly, don’t call out to them loudly with overexcitement written all over your body language.

Your sudden energy burst can put them in “flight or fight mode” — they might cower behind their owner or snap at you.

3. Let the dog approach you (and observe its body language)

When the owner gives you the go-ahead to interact with their dog, wait for the dog to come to you — not the other way around.

Your first meet-up with a dog you don’t know should go according to the dog’s terms. Not yours.

You should squat to get to the dog’s level and maintain a short distance between you two. This will signal that you’re inviting them to come to you.

What not to do:

The best way to make yourself appear friendly to an unfamiliar dog is to squat with your body tilted slightly to the side so that you don’t look at them directly.

And as you squat and invite the dog over in soft tones, observe their body language.

Sure. The owner may have allowed you to interact with their dog. But just like humans, a dog’s emotions can shift abruptly. That’s why reading their body language is important.

If they suddenly seem fearful — walking towards you with a stiff body, ears pinned backward, head held low, tail tucked — it’s safer if you stand up and move away from them.

But if the dog approaches you with a relaxed waggly body, it means they are comfortable with your presence.  However, keep your hands to yourself first and wait…….wait for the dog to lean in and sniff you before you start to pet them.

And if the dog doesn’t approach you, don’t walk towards them and force an interaction. They are likely not in the mood for a one-on-one. Let them be.

4. Allow the dog to sniff you, then pet them

Dogs collect a lot of information about us when they sniff us — our moods, what we’ve eaten lately, where we’ve been, and more.

If the dog you’re meeting for the first time is interested in knowing you more, they will sniff you.

This sniffing ritual is also a good thing because dogs possess a certain type of memory — associative memory — that enables them to store the unique natural body scent of every human they interact with.

So even if you run into this dog several months later, they will remember you based on your scent (which they stored in their associative memory during the first encounter with you).

And as you let the dog sniff you to their satisfaction, avoid stretching your open hand to their nose for further sniffing. Instead, present a loose fist.

From a dog’s perspective, a fist looks smaller hence less threatening than an open hand with fingers pointing out.

Dog owners spend a lot of time training their dogs to greet strangers politely, including not jumping on them.

If the dog you’re interacting with for the first time jumps on you, calmly stand up and turn away — particularly if the owner is already commanding the dog to get off you.

Acting overly affectionate will only confuse the dog. They might think it’s finally acceptable to jump on people and may start breaking their owner’s “no-jumping-on-strangers” rule.

6. Pet the dog the right way

If the dog seems comfortable with you, you can gently stroke them under their chin, chest, or shoulders (avoid direct eye contact as you pet them)

You should avoid petting them on the head, as dogs consider this a threatening gesture.

Also, most dogs don’t like to be hugged they find hugs restrictive. A dog may put up with hugs from their family. But a hug from a stranger can force them to free themselves and walk away, or bite to make you let go.

7. The dog has the final say

If the dog doesn’t want to be petted anymore, their body may stiffen, and they will try to get away from you.

When this happens, don’t insist on prolonging the petting session. Else, they’ll bite. Only the dog gets to decide how long this close interaction with you will last.

FAQs on meeting dogs for the first time

What should you not do when meeting a dog for the first time?

As noted earlier, you shouldn’t stand over the dog, stare at them directly, approach them, tolerate inappropriate behavior, pet them the wrong way, or force an interaction.

How do you introduce yourself to a dog?

It’s best to let the dog walk towards you and initiate the greetings, not vice versa.

How do you interact with a new dog?

You should first ask the owner for permission to interact with the dog, stay calm during the interaction, squat to get to their level, let them sniff you before petting them, and let the interaction go according to the dog’s terms.

Image in header from https://unsplash.com/photos/8FYvkl0zHQE