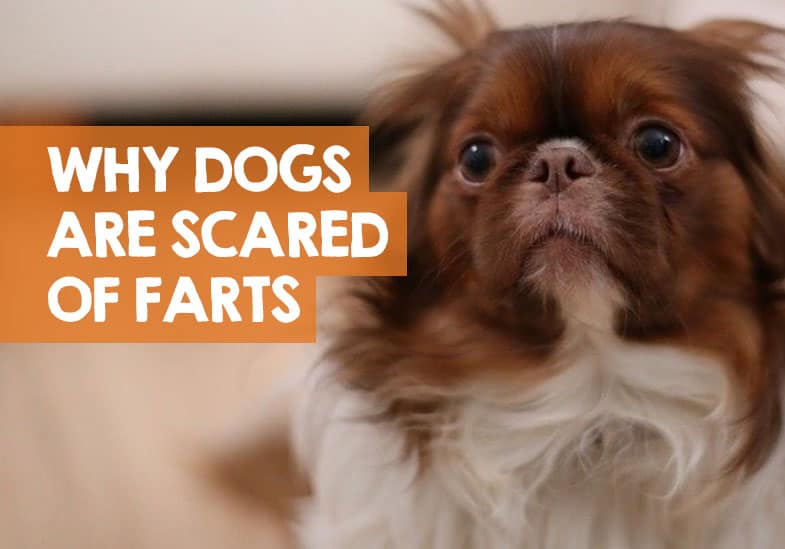 Last week, our dog was minding his own business, just lying at the foot of our bed and chilling out, when he let out a squeaky fart. It wasn’t just the noise of his flatulence that made us laugh, but also his reaction; confusion and fear in one hilarious facial expression!

As unfair as it might sound for us laugh, I challenge you not to do the same if your dog gets confused by their farts. It made me wonder though, why our dog was scared of farts. Not just his, but also mine!

I decided to research why dogs are scared of fart noises, do they even know they are doing it, and if it’s something they do when nervous. Here’s what I found out with the short answer first.

Why are dogs scared of farts? Dogs are scared of fart sounds because it will often be an unexpected noise. This is why some dogs will be confused when they fart, particularly when their human owners then react with excitement or scolding behaviors.

Keep reading, as I’ve done all the research you never thought you would ever do, about dogs farting/ Their fear, confusion, embarrassment, and more.

Why dogs are scared of fart noises

Let’s be completely honest, when your dog farts and freaks out, it is extremely funny for most dog owners. It’s also hilarious when you might do a fart and scare your dog!

With the majority of dogs, the reaction to a fart sound is one of surprise or confusion and not actually abject fear. It’s even more funny when your dog scuttles off with his tail between his legs, because the noise has freaked him out so much!

If you browse online, numerous videos continue to pop up showcasing compilations of dogs being startled by either their owners or their own farts. Often garnering millions of views, these videos are sometimes shared countless times, appearing on many different forms of social media and taking the internet by storm.

With this in mind, there is no doubt that the “dogs being scared of fart noises” phenomenon is one that invokes a sense of fascination in most people in general.

Furthermore, farts seem to have the wonderful ability to make just about anyone laugh, regardless of their gender or ethnicity. This is true even for the most serious of personalities, with stoic individuals often cracking up when a stranger, friend, or pet lets one rip, out of the blue.

In fact, as the author writes this he is currently chuckling at his own pooch’s unexpected bout of flatulence (as well as covering his nose).

It is obvious that dog owners are full of curiosity when it comes to their pup’s personalities and behaviors, and their bizarre habit of fearing farts is no different. So why are dogs so scared of farts in the first place?

Why dogs are afraid of their own farts

Unfortunately, there is no official scientific explanation as to why dogs are scared by their own farts.

Some people believe that they are frightened of the odor as well as the noise. Whilst others believe that their habit of leaving a room after a particularly smelly fart is down to a sense of shame and guilt.

In fact, I read some comments on forums from people who say their dog farts, then walks away quickly due to the shame and smell!

However, this is probably not the case and is, instead, something made up in the fanciful imaginations of dog owners.

Although there is no doubt that dogs can feel shame, it is unlikely they associate farts with anything negative and may not even understand what a fart is in the first place. In fact, many dogs, including my own, seem to be confused when they fart.

Can dogs smell their own farts?

But what about the smell, I hear you say. Surely some dogs are put off by the smell of their farts? Well, this depends. If the dog was unaware of the fact that it was the odor from their fart that they could smell, maybe.

Dogs are fascinated by scents, with their sense of smell being around 10 million times more effective than humans… I am going to take a guess that they can smell their own farts, but probably don’t think it’s a bad smell!

However, despite most dogs not recognizing what a fart is, they are familiar with their distinctive odor and because of this, a fart will probably not bother them at all.

In terms of logical explanations, the most likely one is that dogs associate their farts with other noises that frighten them, such as thunderstorms or fireworks.

Handy Hint:If you have a dog scared of loud noises, you could invest in a ThunderShirt which helps anxious and nervous dogs. Click the image below to see the Amazon prices.

This is especially true for nervous dogs who are scared of many types of loud noises they hear.

Why do dogs get confused when they fart?

Although they will recognize the smell of the fart, they will be unaware of where the noise has come from, often startling them when they are resting or lying down. My own dogs always looked really confused after doing one, particularly if it wakes him up!

Despite this, many dogs will show less of a fear response to their farts compared to others. Most of this comes down to personality and temperament, as well as how naturally brave the dog is.

Likewise, if you own a dog who suffers from flatulence problems, they will quickly become used to any strange noise they make and start to pay little attention to it.

Similarly, if your dog has never heard itself fart before it will probably react to the sound with confusion and fear, this being pretty common among puppies or young dogs.

Do dogs fart when they are nervous?

I can’t find any evidence to suggest that dog farts when anxious and nervous, other than anecdotal suggestions on forums from owners.

Why are dogs scared of human farts?

There is not too much to say about this question, except that the answer is pretty much the same as the one above but with a couple of variations.

Unlike their own farts, dogs are often unprepared for their owner’s passing gas and are startled or scared whenever this happens.

To make matters worse, many owners (especially young ones) enjoy frightening their dogs with their farts, taking great amusement in their reactions.

Although you may not be able to help yourself from passing gas sometimes, it is important not to purposefully scare your dog if you can help it (of course it cannot be helped if your dog randomly reacts like this one day out of the blue). I even saw a video once when a puppy did a pee when hearing a human fart.

Certain dogs can develop anxiety if they are always on alert for strange noises (yes, even with farts), and can become unhappy and depressed if their owner is constantly trying to frighten them.

How to help a dog with farts

Although farting in dogs can be amusing if it only happens occasionally, the constant passing of wind by gassy canines can quickly become a nuisance for both owner and dog.

Not only that, if the offending pooch’s farts are particularly potent it can drive friends, family members, and guests away from the home.

Likewise, the last thing we want to happen is for us to bring a date home only to be met with the odor of stale dog farts (trust me, I have been there in my younger days).

Additionally, chronic flatulence can often be uncomfortable or downright painful for our dogs, sometimes being twinned with stomach pain or other unpleasant symptoms.

Thankfully, there are many ways in which you can help your beloved pooch control their unfortunate gassy affliction, many of which we will explore below.

The first thing any owner should do is visit the vet if their dog’s farting is out of control. There they will be able to give you a better idea of what is responsible for the excessive gas.

Sometimes a food allergy or intolerance will be responsible for upsetting their large intestine, which can easily be diagnosed and treated effectively.

In addition, your vet may tell you to avoid giving your dog certain types of foods even if they do not have an allergy or intolerance. For example, table scraps and sugary or fatty foods are notoriously bad for causing canine flatulence.

Similarly, even healthy treats such as vegetables like broccoli or cauliflower can cause dogs to experience regular bouts of gas (not all that surprising considering they have the same effects on humans).

You may want to check your dog is not sneaking into the trash from time to time, as well. Many dogs upset their stomachs by ingesting rotten foods and other items from the trash bin, usually without the knowledge of their owners.

To stop the chances of this happening you can move the trash somewhere where your dog cannot get access to it or invest in a bin which is specially designed to keep clever canines out.

Handy Hint: I’ve written an extensive guide which explains the best ways you can stop your dog and stray dogs from getting into your trash cans.

If you own a dog, you will likely be aware of how regularly they are scared by the most innocent of noises. From toast popping out of the toaster, to the ding of the microwave, to the sound of wind chimes blowing in the wind or the creak of shutters, dogs can be scared by any noise that takes them by surprise.

This is particularly true for nervous dogs, who can react with terror to the sound of a loud fart if they have never heard one before.

More tips for nervous and anxious dogs can be found below.