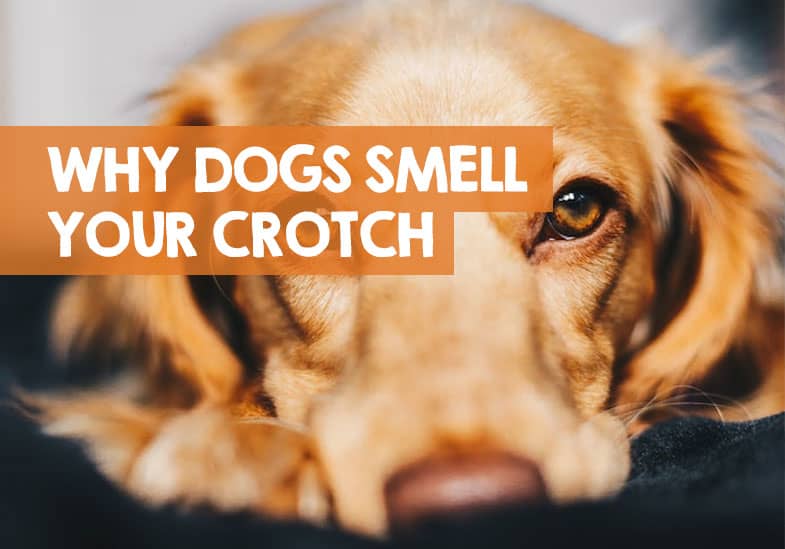 When a dog smells your crotch area, two cultures collide. Man’s best friend still has some primeval behavioural tendencies, and no apparent sense of personal space. It’s no wonder many of us immediately freak out when a dog sniffs our crotch.

But what is this all about, is it normal for dogs to sniff your crotch, and how can you get them to stop this uncomfortable behaviour?

The good news is you might be able to stop your dog from sniffing your crotch, but firstly, here’s why they do it.

Dogs smell your crotch as human sweat gives them information about you, which is why dogs will often sniff the crotch of strangers to see what they are about. Dogs will also smell the crotch of females on their period as ovulation produces a change in pheromones that dogs can detect by smelling.

While humans react with outrage and embarrassment when a dog smells their crotch, dogs view this behaviour as sociable curiosity. They would consider it rude not to try to find out everything about you before spending time with you.

The human equivalent would be to shake hands and enquire about your well being.

Thankfully, dogs can be trained or distracted long enough to stop them crotch sniffing and indulging in this offensive practice.

Here’s more detail on why dogs smell your crotch and why your dog is seemingly obsessed with your private area.

1. Smelling is their primary sense

Much like babies and puppies that explore the world through their mouths, mature dogs use their sense of smell to give meaning to their surroundings. They have a vomeronasal organ, otherwise known as Jacobson’s organ, above the roof of their mouth that enables them to detect scents 40-50 times more effectively than humans.

This remarkable ability has been put to good use in service to mankind. Dogs have been trained to sniff out drugs, bombs and fugitives.

2. They are gathering information

Dogs are curious and gather information through their olfactory senses. They are particularly interested in what they can glean about other canines. They can sense the mood, age, health and sex of other dogs just by giving them a few seemingly perfunctory but well placed sniffs around the butt and crotch area.

Intact males are especially interested in any pheromones emitted. This tells them where a receptive female is in the estrus cycle, and how successful their attempts at procreation are likely to be.

“Pheromone scents not only identify the sex, age, health, and mood of the individual but also carry a lot of sexual information as well, such as where the female is in her estrus (menstrual) cycle, or if she is pregnant or having a false pregnancy.”

3. Dogs are sociable, and this is their way of greeting you

A quick sniff to your crotch is the canine equivalent of small talk or shaking hands. Dogs want to gather information about you, and they will smell your crotch as their way of doing it.

This curiosity, with respect to humans, is not much different from their attitude towards dogs.

Human apocrine glands are situated in two places, in the groin area and in the armpits. These glands secrete pheromones and bodily fluids which, when exposed to the air, attract bacteria, and produce a myriad of odours. These biological interactions tell dogs all they need to know about you – and they can get to know you better by smelling your crotch.

So, yes, it is perfectly normal for dogs to sniff your crotch. It’s their way of figuring out who you are, whether you a possibly a friend or foe, where you might have been, and offers a unique identifier to you as a person.

Service dogs have been trained, however, to go beyond their instincts and to look for signs of human disease. They can detect cancer, sense if you are in pain, fluctuations in the sugar levels of diabetic patients, and the onset of epileptic fits.

Dogs are also said to be able to detect when earthquakes and tsunamis are coming.

4. You are hormonally interesting

Left to their own devices, dogs will be single-minded in their focus and pursuit of knowledge about you. They are primarily interested in your reproductive status and activities.

For example, they will be able to discover if you have recently been sexually active. They can also detect menstrual fluids and whether someone has recently given birth or is nursing.

Studies have shown that dogs can accurately indicate when cows are ovulating. If you are trying to fall pregnant, you may want to pay attention to changes in your dog’s reaction to you each month.

And yes, it stands to reason that therefore dogs smell your crotch when you are on your period. They can sense you’re menstruating through smells and changes you won’t be able to detect yourself.

5. The dog is too short to reach your armpits

Dogs are vertically challenged in relation to human beings therefore find it easier to sniff your crotch than under your arm. Short dogs are also generally less likely to sniff your groin area because of their height disadvantage.

Their inability to reach your crotch already conveys useful information to them… it’s also why they like to smell your ears by the way. Your ears hold detail.

Possibly, because humans’ armpits are closer to their noses, they tend to disguise any natural odour emanating from the region, with anti-perspirants and deodorants.

It is normal for dogs to sniff your crotch, but also normal for people to react badly

From a very young age, children are taught that certain parts of their anatomy are private. They are to be kept out of sight, and not to be touched by themselves or others. In practice, attention should not be drawn to them at all.

Dogs are not raised with this form of socialisation. When they engage in crotch sniffing antics, humans usually ascribe ulterior motives to their behaviour and project their own thoughts onto the offending dogs. This is known as anthropomorphising.

If someone is coming to your home for the first time, for example, if you are introducing your new love interest to your parents, they could feel socially awkward or embarrassed when the household pet greets them this way.

You may not notice this behaviour until your visitor arrives. Your dog is used to your smells and knows all about you. So, unless you do something that will pique its interest, it is unlikely to investigate your body parts.

Body language analysts tell us that human beings protect their reproductive organs when they perceive an existential threat. Imagine how alarming it is when there is a direct assault on their genital area by your dog’s muzzle, i.e., teeth.

One political activist took grave exception to a dog repeatedly sniffing her groin, so she brought a lawsuit against the judge who owned the dog. The plaintiff claimed that because he had done nothing to stop the dog’s behaviour, that this amounted to sexual harassment.

Handy Hint: I’ve recently published a guide that explains how you can stop your dog nipping at guests to your home.

How do I stop my dog from sniffing my crotch?

In the interests of good human relations, it would be advisable to train a nosy dog in more socially acceptable behaviour.

You can help stop your dog from sniffing crotches by training him to sit whenever guest arrive. Using the crate can also help to stop the dog so he does not indulge in any free range interrogation.

Alternatively, remove it from the area for more formal meetings. With more and more people working from home, this should be standard work protocol.

If your visitors are willing to meet with your dog, suggest that they present their hand or fist to the dog, to ward off any more intimate enquiries.

Another tactic may be to confuse the dog with a treat that has a more pungent and desirable smell than any potential odours your visitor can produce.

Reward any positive behaviour with praise and distract the dog with a toy or a treat.

It’s perfectly normal for your dog to want to smell and sniff about your crotch. Is it pleasant? No of course not, so there are steps you can take to prevent it.