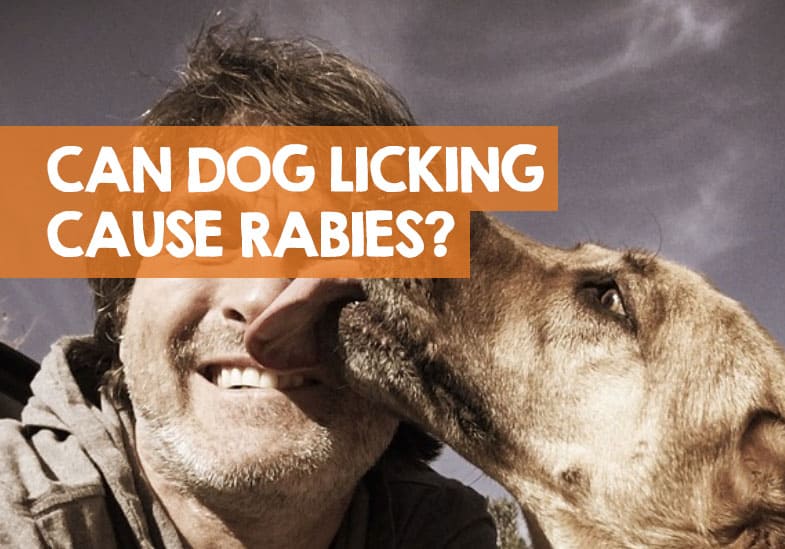 Rabies is a scary disease as it can quickly kill humans with a range of nasty symptoms. It’s a zoonotic disease meaning it can be passed from animal to human, and as we all know, dogs are amongst the common mammals that can carry rabies.

But what does this mean for us, and how likely is it that you can get rabies from a dog licking you, licking mouth and lips, an open wound, or even your hand?

I decided to research into the risks and spent an afternoon reading notes from government agencies, medical websites, and the World Health Organisation to see just what we need to know about rabies and dog licking.

Getting rabies after being licked by a dog

The following contains a synopsis of what I have learned, but first here’s the short and easy answer about the chances of you getting rabies after being licked by a dog.

But please don’t immediately panic. If you live in an English-speaking country, rabies is extremely rare. It has been virtually eliminated in the UK and Australia, with only a few cases each year of animal to human transmission being reported.

This means that if you live in England, Scotland, Wales, Northern Ireland, USA, Canada, or Australia and a dog licks you, chances are you won’t get rabies, because rabid dogs in these countries are almost unheard of.

Of course, there are other countries where rabies is still present where you need to be very careful about letting dogs lick you or come near your mouth and open wounds. More about those countries further down though.

Before I get too in-depth though, here’s what the WHO (World Health Organisation) say about getting rabies from a dog licking you:

“The rabies virus is mainly transmitted from the saliva of a rabid animal when it bites or scratches a person. Licks to wounds, grazes, broken skin, or to the lining of the mouth and nose, can also transmit the virus.” (read source)

Can dog licking cause rabies?

You can catch rabies from a dog lick, but certain factors will need to line up in order for transmission to occur.

Let’s take a closer look at those variables: Here are some of the facts that I’ve read on various health websites about the risk of rabies transmission to humans who have been licked by dogs. Here’s what I learned.

Now let’s get into a bit more detail about the various scenarios where a dog licking you could give you rabies, then more on what countries to be careful in.

Can you get rabies from dog licking your mouth?

It is possible to contract rabies from a dog licking your mouth, nose, or even your lips. The World Health Organisation explain that rabies can be transmitted from dogs licking the lining of your mouth, and this by nature would include the lips.

Can you get rabies if a dog licks an open wound?

Yes, you can get rabies from a dog licking your wound, if of course, the dog has rabies. The World Health Organisation has the following advice on their website:

“People exposed to rabies should receive prompt post-exposure prophylaxis (PEP) to prevent clinical rabies. PEP consists of wound washing, a series of rabies vaccinations, and in some cases rabies immunoglobulin.”

They go onto to say if you have been exposed to a dog with rabies licking you and an open wound, you should also:

“Wash wounds and scratches immediately with soap or detergent and flush them thoroughly for about 15 minutes with copious amounts of water. If soap is not available, flush with water alone. Wound washing is the most effective first-aid treatment against rabies.”

Can you get rabies from a dog licking your hand, feet, or legs?

It is very unlikely that you would get rabies from a dog licking your hands, feet, or legs unless you have open wounds and cuts in these areas.

The World Health Organisation are very explicit on their website where they say you should avoid dogs licking you in areas where you have broken skin, as this is where saliva can enter your body.

Bites and scratches are more dangerous

Dogs are responsible for 99% of all rabies cases around the world, but few of the cases are recorded as being from lick. Most dog to human rabies transmissions will be a result of a dog bite or scratch.

Even if you do get bitten by a rabid dog when abroad, the chances of contracting an infection is 15% according to a 2008 study. The study also said:

“If bitten, scratched, or licked on mucous membranes or an open wound by any animal in a foreign country, immediately wash the wound thoroughly and vigorously with soap and water, and with a povidone–iodine compound if available. Seek medical treatment immediately to receive post-exposure vaccination.”

As I’ve explained, the risks of you getting rabies from a dog lick in a western and English-speaking country is very low. Here’s some interesting data I’ve found relating to various countries.

Rabies statistics in the USA and Canada

Whilst rabies is not completely unheard of in North America, the dog to human transmission is still rare. There have only been 25 cases of human rabies reported between 2009 and 2018, and 7 of these were caught by the person when travelling abroad.

So, I would be confident in saying that it’s very unlikely you will get rabies from a dog licking you in the United States in Canada. However, I would not be comfortable with a dog licking my mouth, lips, or wounds as other diseases and illnesses can be transferred this way.

Handy Hint: There’s some more medical data about disease transmission related to canine licking of humans in this blog post.

Rabies statistics in the UK

According the UK government’s public health website, there is minimal risk to the public in contracting rabies in England, Scotland, Wales, and Northern Ireland. The website states that:

“Rabies does not circulate in either wild or domestic animals in the UK, although some species of bats can carry a rabies-like virus. Human rabies is extremely rare in the UK. No human cases of rabies acquired in the UK from animals other than bats have been reported since 1902. A single case of human rabies acquired from a bat was reported in 2002 in Scotland; this individual had sustained a number of bat bites. 5 cases of human rabies associated with animal exposures abroad occurred between 2000 and 2017.” (read source)

Based on this, I would be confident in saying you will not you catch rabies from a dog lick in the UK as at July 2020 when I conducted this research.

Australia appears to have a very similar scenario to the one in the UK, meaning you probably don’t need to worry too much if your dog licks your hand, mouth, or wound.

“Rabies virus does not currently occur in land dwelling animals in Australia but ABLV does occur in bats in Australia and can be transmitted from bats to humans and to other animals. Only three cases of human infection with ABLV have been recorded since the virus was first identified in 1996.” (read source)

Just like I advise in the UK and USA, try to avoid your dog licking your face and mouth as it could lead to another illness despite the low possibility of a rabies infection.

What countries is it risky in?

Things change when you travel abroad, as the disease is present in other countries where the chance of getting rabies from a dog licking your mouth, wound, or hand is higher.

Once again, I refer to the World Health Organisation who published the following statement on their website.

“Rabies is estimated to cause 59 000 human deaths annually in over 150 countries, with 95% of cases occurring in Africa and Asia. Due to underreporting and uncertain estimates, this number is likely a gross underestimate. The burden of disease is disproportionally borne by rural poor populations, with approximately half of cases attributable to children under 15 years of age.”

In terms of countries, India is currently the place where you are most at risk of contracting rabies from dog licking and bites due to the sheer number of stray dogs.

You can see up to date information on which countries the UK government rates as being high risk for rabies on the Gov.uk website.

How to reduce the risk

I’ve established that it’s unlikely I will get rabies from my dog licking me given that I live in the Western World, but that doesn’t mean I won’t be at risk when travelling abroad.

If you are planning on travel, here are some things you can do to reduce your risk of getting the rabies disease.

Disclaimer: I am not a vet or disease specialist. The notes in this blog post are based on what I have researched online as at July 2020 and could change at any time. If in doubt, you should always seek a professional opinion and expert advice.

I hope I’ve put your mind at rest a little bit as you are not going to get rabies from your dog licking your mouth unless you have a dog with rabies – and that’s almost unheard of in the UK, United States, Canada, and Australia.

If you are planning on travelling to countries where rabies is present, please do take care. If you have children, make sure that tell you if they have patted or been licked by a dog so you can take the necessary precautions.

I write about topics like this regularly, and here are some of the most recent ones related to rabies and disease: