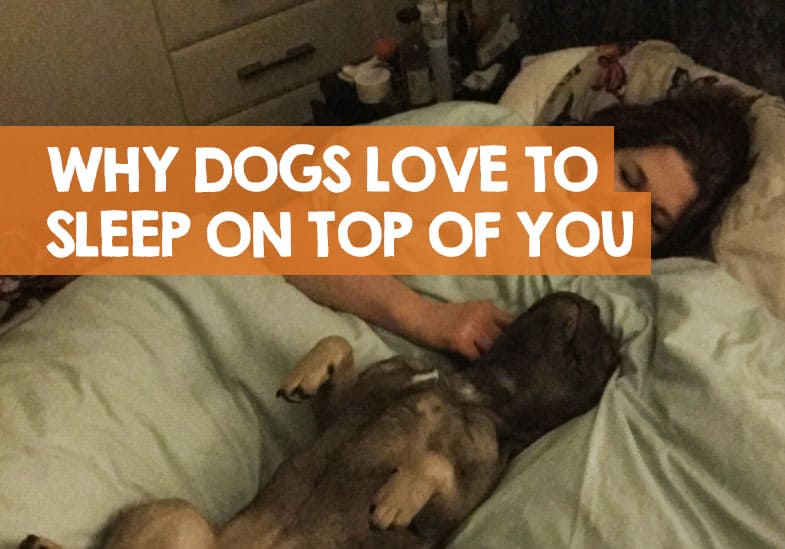 Dog owners often talk to me about the strange habits their mutts have developed. This week was no different with a lady in Ohio explaining how her dogs loves to sleep right on top of her in bed. My dog doesn’t do this to me, but I don’t think it’s actually that unusual.

In fact, once I started to look into the reasons why this happens, the more I thought you could view as being rather special, because most of the time it means your dog wants to be close and stay connected with you.

But it’s not always the case.

Here’s the short answer, followed by some more detailed analysis of when a dog sleeping on top of you could indicate a problem.

Why does my dog sleep on top of me? Your dog will sleep right on top of you for instinctive reasons relating to their pack mentality. But when a dog lies on you it can also point to behavioral issues including wanting to exert dominance and separation anxiety.

If you want to know about what I discovered, please do read on so you can differentiate between cute behavior and problematic ones.

Why your dog loves to sleep right on top of you

It doesn’t matter if you’re fast asleep or it’s the middle of the night. Your dog wants to be near you and feel loved (while being loving too!). That’s why, in the main, a dog wants to lay on top of you.

If you want my short and sweet opinion, it’s because they love you and want to feel loved back. But there’s a whole lot of other reasons why a dog insists on sleeping on top of you.

Here’s what it could mean if you believe your dog trying to sleep on you is becoming a problem, with some background on how some of the behavior is instinctive.

1. It’s an instinctive trait due to dogs being pack animals

When dogs were wolves, their ancestors would have lived in packs. Part of the pack behavior was to ensure the survival of its members. Not just that though, but also to give each other warmth on the den, particularly on cold winter nights.

Fast forward to modern times, and the domesticated dog will still exhibit this behavior.

While survival may not be your dog’s main priority anymore, they still want to feel the warmth and comfort of laying up close with you.

What better way to warm up with their fellow pack members than your dog sleeping right on top of you at night?

It makes even more senses when you consider that dogs are born into litters. From day one, puppies lie on top of each other for the sense of security and coziness they get from such behavior. Most dogs won’t grow into adulthood with their siblings, so you’re the next best thing.

Handy Hint: I’ve previously written a guide which explains how you can keep your dog warm at night, both inside and outside the home.

2. Your dog sleeps on top of you for protection

If you look at how a pack of wolves behaves, one of the main reasons for staying close is for security. This allows for the wolves to protect each other. It’s strength in numbers. The same applies to your dog.

Your dog sleeps on top of your head as an intuitive behavior to protect you.

But it works both ways in the world of dog. Not only is your dog protecting you. But he wants protection from you too.

So, by laying or sleeping on top of you at night, he’s not only looking out for you. But he believes you’re protecting him too.

3. Your dog sleeps on top of you due to separation anxiety

Some dogs suffer from separation anxiety. You may find this in young dogs who have just left their litter. Or a rescue dog who has been traumatized in a previous home.

Other dogs simply can’t bear being apart from their owners no matter how much love they get. I wrote about this recently with a lady who had a problem with her dog following her constantly, but never the husband!

Is your dog sleeping on top of you when you’re sleeping? Perhaps he lies on your lap and goes to sleep just before you leave for work. Either way, consider that he may be battling from a bit of separation anxiety.

4. Your dog sleeps on top of you for attention

We’re all familiar with the dog who’s always seeking attention. This could be in the form of dropping a ball at your feet to play a game with him. Or, staring at his leash while frantically wagging his tail as a sign he wants to go for his walk… now!

But another way a dog seeks out his owner’s attention is by sleeping on top on top of them, even by laying on top of an owner’s head! Small dogs will happily leap up and sleep on your lap if you give them half a chance.

Bigger dogs would love to do the same. But have to contend with laying their head on your feet as a way of sleeping on top of you.

All the same, they’re simply looking for some attention when they try to sleep on top of you at night, or at any point during the day for that matter.

5. Your dog sleep on top of you because he’s the boss

Sometimes a dog will lay on top of you because they’re asserting their dominance. If they see you as the leader of the pack, then they’re lying down on you as a sign of admiration. But, if they think they’re the leader, you may have a slight problem on your hand.

It’s important your dog knows their place in the home (aka the pack). If you allow them to take the role of the leader, you’ll have discipline problems down the line.

So, if your dog is sleeping on top of you ask yourself, ‘Who’s the boss here?”.

Handy Hint: If your dog has ideas above his station you might want to see what signs to look for that they have a complete lack of respect for you.

If you know for sure you’re the boss and your dog understands that too, then all is well. You will just have to accept he’s lying on you because he just wants your affection and love.

6. Your dog sleeps on top of you as a sign of affection

Which brings me back to my original theory as to why dogs sleep on their owners at night. If your dog is sleeping on you it’s because they adore you. It’s one way of showing their affection for you. He wants to cuddle up as closely as he can and love you.

But it’s also a way your dog can get some affection back. If he’s sleeping on you, it normally guarantees a few strokes and cuddles back from you. It’s a win-win situation really. You’re getting a whole lot of love and so is your dog.

Handy Hint: It’s not unusual for dogs to develop an affinity with just one person in the family, making them a favorite.

When laying on top of you become a problem

Sometimes, a dog constantly laying on top of you could be a problem. If you’re an owner of a large dog breed, this could become a seriously uncomfortable problem!

But jokes aside, your dog could be having some behavioral or other underlying issues you need to take note of.

Some of these issues could include the following:

Besides these issues, other problems could arise when your dog’s need to sleep on top of you becomes uncomfortable for you. You may enjoy the closeness while watching television or reading a book. That’s not a problem.

It does become a problem though when you’re trying to get a decent night’s sleep yourself. If your dog constantly wakes you up during the night as he tries to cuddle up to you, then you need to solve the problem.

You could consider putting him in another room at bed time. But that’s not likely to solve the underlying issue. Or you could train your dog to sleep in his own bed next to your bed.

Whatever the problem, solve it so you and your dog can continue to have a loving, comfortable and companionable relationship.

Did You Know? It’s not that likely for a dog to carry bed bugs into your house due to the way bed bugs like to live.

I know of someone who’s dog loves to nestle in her hair in the middle of the night. She says it’s one of the most amazing feelings when he settles down and nuzzles into her neck. Her dog is a small breed, thank goodness!

Most times, the reason your dog sleeps on top of you is because they love you. They’re showing their affection towards you and they want to be close. A dog will sleep on top of you to feel safe, warm and to have a sense of connection with you.

This is a wonderful way to bond with your dog and to show your love and affection back. And, by sleeping on top of you they’re showing how much they trust you.

Make sure they know you’re the pack leader. Lay down the rules when he sleeps on top of you. This way you’ll have a trusted companion for the rest of your life with him.

link to What Can Dogs Drink Beside Water? (Safe Drinks Apart from Water)

Dogs will often drink things that they shouldn’t. Occasionally an owner might have to offer them something else to drink apart from water due to circumstance.Whatever your reason for wanting to...

Continue Reading
link to Why Do My Dog’s Farts Smell Like Rotten Eggs or Sulfur?

I guess we’ve all had those times when the dog let’s out a really rotten egg fart. They always seem to time it well too. Such as the time you were trying to impress your new in-laws, a dinner...