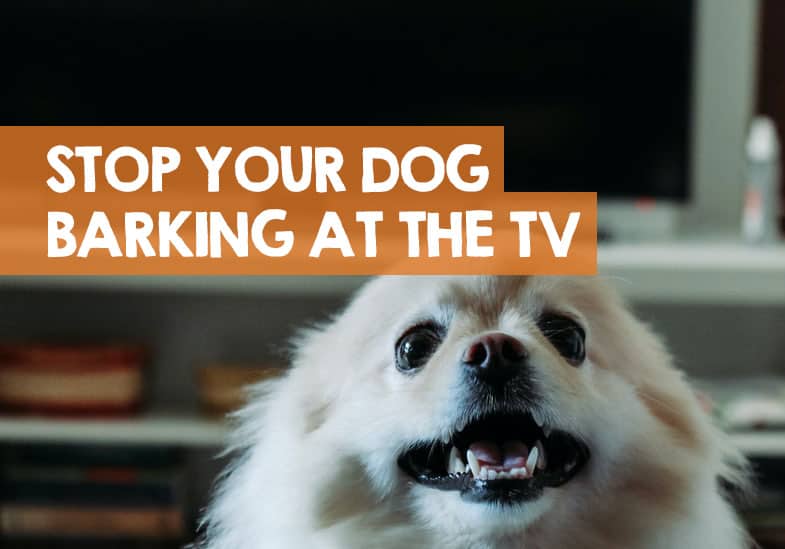 Does your dog go crazy barking whenever you turn on the TV? It can be funny to start with but becomes annoying when they don’t stop. My dog does barks at the television, but only at certain programs… wildlife ones with big cats on. No matter how much he’s told to stop it, he doesn’t, until we turn the show about lions and tigers off.

But some dogs will bark incessantly at anything that appears on the TV. This isn’t going to go down too well when you’ve had a long day at work and just want to chill out. But there are other ways you can get your dog to stop barking at the TV, other than switching it off – I will explain how.

How to stop your dog barking at the TV

Whether your dog is bored, frustrated or trying to protect you, you want to tell your dog there’s no need to start barking whenever you switch on the TV. It’s annoying behavior and ruins your idea of a relaxing night watching your favorite series.

Here are some ways you can stop your dog from barking at the TV.

1.Train your dog to accept the TV

Ideally, you want to start training your dog from puppyhood to accept the TV in your lounge. You want your dog to know the TV is not a threat and certainly not something to bark at. Even if your dog is older and has got into the bad habit of barking at the TV, you can train them to stop.

The first step is to arm yourself with some of your doggie’s favorite treats. The next step is to figure out which sounds or sights set your dog off – in my cases it lions and tigers.

This may require some practice and patience.

Observe your dog’s behavior and notice when they start getting excited when something happens on the TV screen. Is it only certain sounds or images that triggers him? When you know what makes him react, you can prepare to intervene.

Before your dog has a chance to go ballistic, bring out the treats. You want to distract him from whatever is about to trigger him into a barking frenzy. You also want him to learn that if he stays calm, he’ll be rewarded with a treat.

Remember to also tell him he’s a good boy.

2. Distract him from barking at the TV with a game

Okay, this idea does mean you don’t get to chill completely while watching TV. Throw a ball for your dog to fetch or let him tug on a rope while you’re pulling it. This will distract him from the TV and may eventually tire him out as well.

You could also make sure all his favorite toys are in the room and distract him by giving him a toy to play with while you’re watching the TV. If you’re using the training method suggested above, you can replace the treats with his favorite toy.

While this idea will stop most dogs barking at the TV, it does mean you don’t get to relax fully if you’ve got a dog playing tug or scooting around the lounge looking for a ball. But at least you can hear what’s happening on the screen without the barking!

3. Excercise your dog before watching TV

By exercising your dog before you settle down to watch a movie, you’re tiring him out and satisfying his need for attention. Take your dog for a good walk or play a game of rough and tumble in the garden.

Have you noticed how much happier your dog is when he’s been active with you? They’re more relaxed, tired and less inclined to go crazy at every little sound the TV makes.

A well-exercised dog is more likely to go to sleep than to worry about who’s making all that noise on the TV and start barking at the screen.

I’ve mentioned the treats, the games and the toys but how else can you keep your dog occupied while you watching the box? How about that Kong stuffed filled with his favorite kibbles? Your dog will spend the evening chasing the Kong around your feet while you watch TV in relative peace – you can buy one on Amazon.

You could also consider giving him something to chew on such as a bone or a pet chew treat, he can gnaw on. This will keep his attention off the TV and keep him otherwise occupied.

Handy Hint: People have wondered for centuries whether dogs can understand each other’s barking.

Why do dogs bark at the TV?

Dogs will also bark at the TV because they feel they need to alert you to danger or because they’re looking for attention.

A TV can be quite confusing for dogs especially when your lounge is suddenly full of people and animals they can’t smell or touch. Dogs love to sniff a new presence so imagine how frustrated they must be when there’s no-one to sniff?

Here are some other reasons your dog could be barking at the TV which might help you decide how to stop them doing it.

Most dogs love a bit of activity around them and the more going on the better. The TV brings in a whole new level of excitement with so many people, animals and other sights and sounds all happening in one spot. If your dog is prone to getting excited at the drop of the hat, well then, expect him to start barking at the TV.

2. They are anxious or fearful

For some dogs, certain sounds can trigger off their anxiety or even fear. Gunshots from your favorite crime series could set him off barking or he may even think they’re fireworks being set off next door. Police or ambulance sirens are other sounds that often send an anxious or fearful dog into a barking (or howling) fit and it makes no difference if it’s on the TV.

4. They are super curious

Some dogs are more fascinated than others in things that move around. If your dog is an inquisitive dog who has to respond to every thing that moves, he may be barking at your TV because there’s so much moving around on the screen.

6. They are looking for attention

Your dog could be barking at the TV because he wants your attention. He hasn’t had a game all day and he’s bored. Now, you’re watching TV and he wants you to play with him instead. So, every time he barks at the TV and you tell him to stop, guess what? He’s getting some attention!

7. They are protecting you

Your dog may perceive some sounds or images on the TV as threats to you. He starts barking to alert you to the “danger” as his way of protecting you.

What does a dog see and hear on the TV?

We know dogs are smart creatures. So, when the TV is on you can expect they’re seeing and hearing things similar to us. Depending on the size of the TV screen, your dog may be able to distinguish different images and can even recognize that dog gleefully running across the screen.

Most times though, dogs will see a mix of images with low-key colors. They do hear the sounds for what they are so if it’s Larry the Sheepdog barking on the screen, your dog is going to want to reply. Gunshots may sound like fireworks and the doorbell sounds like your doorbell so don’t be alarmed when your dog goes ballistic!

We managed to stop our dog barking at the TV by not watching wildlife shows. A bit drastic, but if it means we get some peace, I am fine with that.

Other times you might need to take more drastic action as shown the tips above, so I hope they work for you.