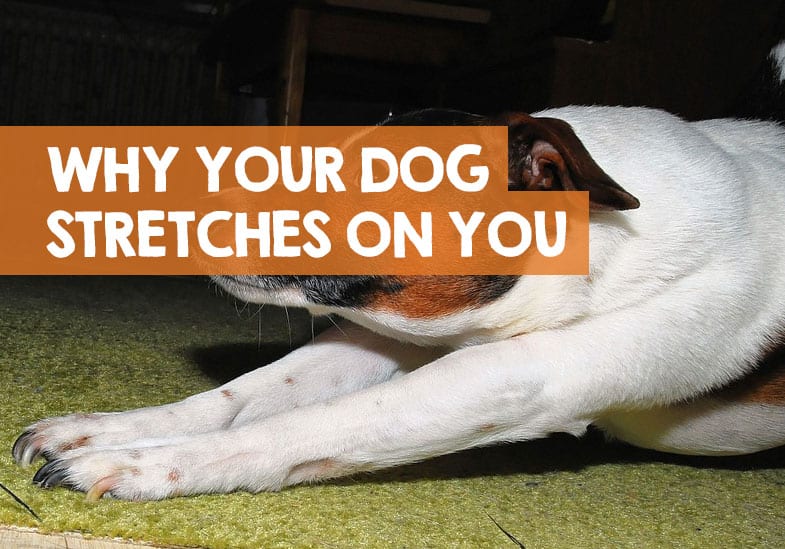 Does your dog stretch around on you, stretch to greet you, or even stretch and push you away? It’s not unusual, but not all dogs display this behaviour. However, my own dog does it and I have observed my friends’ stretching on them too – and here are reasons for it.

Why does my dog stretch on me? Dogs stretch on your as a form of greeting or invitation to interact with them. Dogs will stretch around you in a number of settings, and it should be viewed that the dog is communicating directly with you, in a relaxed and confident manner.

Dogs will stretch to greet you or as an invitation to play or to engage in other non-aggressive interaction, such as cuddling or rubbing.

This behaviour indicates that your dog views you, either as an equal or as being of higher status – rather than the dog being in the role of alpha.

That’s the short answer, but there is a little bit to it, as discussed below.

More reasons why stretch when they see you

Rarely should there be cause for concern when your dog stretches on you. But it might not always be to greet you or feel relaxed.

However one probable cause for an abnormal amount or form of stretching could be canine bloat. Your dog may be trying to relieve pain in its abdomen.

This needs to be monitored and addressed if the behaviour continues, and is accompanied by drooling or other signs of distress.

2. Stretching to help with stiff joints

A dog may also stretch towards you to relieve stiffness in its joints, for example, when it has been stationery, in the same position for a length of time. Older dogs tend to stretch more than younger dogs in order to get their bodies moving. This should not be an undue concern.

Often when you return home and your dog has been resting, it may stretch before coming to greet you.

3. Stretching to get moving

Dogs also stretch in order to get their blood flowing and muscles warmed up in anticipation of physical exercise, such as a walk or a run. You may see them do this when you rattle their leash or harness. It is an ancient ritual, performed by wolves when the pack was getting ready for a hunt.

Another form of stretching is called splooting, made famous by the corgi breed. My French Bulldog also does this, and it makes him look stretched out like a roast chicken!

Your dog will splay its hips on the ground and stretch one or both legs out behind it and lie like that. It could also pull itself forward with its front legs.

Splooting may look awkward but is not harmful to the dog. It requires a great deal of flexibility and is usually exercised by younger dogs, however.

It is often done on a cool surface, such as floor tiles, in order to cool the belly and groin area.

It is also done on grass, and one suspects that the dog is using the lawn to scratch its underbelly. The itch may very well be caused by a grass allergy and is worth investigating.

5. Stretching as the play bow

The play bow, achieved by lowering the front paws to the ground, while its rear end is in the air, is a dog’s invitation to play. This gesture is neither aggressive nor submissive and is directed at a human or another animal that does not pose a perceived threat.

It could be accompanied by an excited bark, a daft grin and general manic behaviour. This stance is also used to attract the interest of a potential mate.

Handy Hint: Some dog will also sploot. This is that funny frog like position they do, here’s why they do it.

There is a more engaging stretch which communicates a special bond between you and your dog. It is different from the excited welcome home greeting.

It could be an expression of pleasure when you enter a room or area after being absent for a short period of time. It could also be initiated if you both enter an area designated for play, such as a garden or the beach.

This stretch is reserved for people that your dog enjoys being with and who make him or her feel comfortable. It is usually accompanied by steady eye contact, and relaxed ears and other facial features.

It also means that the dog is relaxed and possibly in a playful mood. The gesture is offered in anticipation of a positive experience.

Your dog could start stretching when it is some distance away from you or it can leap up and stretch against you.

Not all dogs engage in this behaviour. The stretch in this instance indicates a confidence and an assumption that the dog has a rank high enough to interact with you on this level.

On the other hand, it can also be seen as a sign of recognition of your higher ranking and a request for permission to engage in more boisterous activity.

In general, the increased blood flow that results from stretching, in humans and canines, causes a release of endorphins, the feel-good hormone. It has the effect of releasing tension and relaxing the body.

Is it too much of a stretch of the imagination to think that your dog is relieved to see you?

My French Bulldog believes he is the top dog among the canines and in her eyes, I rank fairly highly among the humans.

He usually gives me the stretch first thing in the morning or when we are out in the garden which is perceived to be a play area.

Outside, if there are no perceived threats in the vicinity, such as a passing dog, he will confidently jump up against me and stretch.

One day, I was taking a while walking down the lane towards home, and he grew impatient waiting for me so she jumped up against the gate and stretched.

Similarly, my friend’s Jack Russell, who is not the oldest nor particularly demonstrative,  will also jump up and stretch against me at random times. She probably considers herself the chief among the small dogs.

The other dogs jump up when greeting or requesting affection but they do not stretch.

I would say that 99% of the time, when your dog stretches at you, it’s nothing to be concerned about… unless you see some obvious discomfort.

My dogs stretches in the morning when he wakes up, as do I, but he also stretches out to greet me, because we’re best buddies.