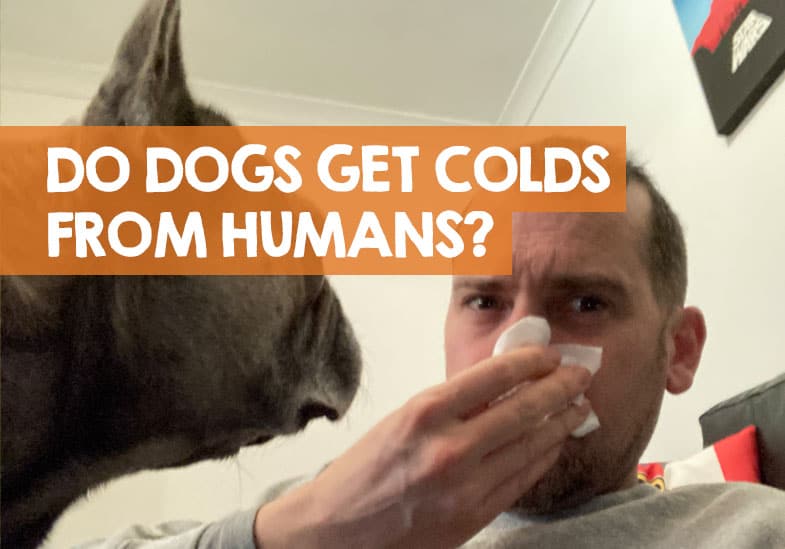 At this time of year colds are very common; with a young son at school I am convinced he brings colds home and gives them to the rest of us. But what about dogs? Have you ever wondered whether dogs can catch a cold or flu from humans?

It’s a topic that many pet owners will ponder during winter time. So, today I decided to present to you that facts about dogs catching colds from humans.

The canine cold is infectious and usually affects puppies who have not yet developed full immunity to it. It does cause abdominal discomfort but is soon dealt with by the pup’s developing immune system.

If a pup is born to a healthy mother, it should have a good kickstart to its immune system. Colostrum, which is secreted from the mother’s mammary glands directly after giving birth, is rich in antibodies.

In effect, the pup inherits some immunity to the common canine cold from its mother.

Dogs can catch colds but not from humans

Dogs have symptoms similar to those of humans when they catch a cold. They will sneeze, have a runny nose and a general malaise. They will lose their appetite and may even develop a cough.

Much like humans, the condition is usually confined to the head and will improve after a few days, when your dog should be back to its normal cheerful self.

However, if any of the symptoms persist and seem to be causing your dog discomfort, it is advisable to seek the advice of a vet.

Kennel cough is a contagious disease that will spread rapidly to other dogs. It needs to be diagnosed and treated by a vet. It can also be prevented through vaccination. It is not transmissible to humans.

Can dogs catch a flu from humans?

Once again the influenza viruses for humans and dogs are not transmitted from one to the other. So no, dogs can’t catch flu from humans.

There are cases, however, of horses and birds being able to infect dogs with an influenza virus.

The disease attacks the respiratory system and symptoms are similar to those suffered by humans and can cause your dog to feel equally miserable.

The virus is spread through infected droplets in the air and through the sharing of water bowls.

Did You Know? Dogs can catch ear mites from cats so you need to be careful if you have two pets like this living in the same house.

Carrying canine colds and flus from one dog to another

Although the canine cold and canine influenza are not zoonotic with respect to humans. That is, people cannot contract these viruses and then pass them on to dogs.

However, the viruses can remain viable on a human’s skin, clothing or accessories for a period of time.

It is best not to touch or cuddle unvaccinated dogs or puppies if you know you are going straight home afterwards to your dogs.

If they are anything like my pack, they will be all over you like a rash, trying to get information about the dogs you have been with.

A good policy would be to wash your hands and even to change your clothes before greeting your dogs.

Signs of a cold in a dog

Whilst a dog can’t get a cold from a human, they can still get colds. Here’s a list of signs to look out if you suspect your dog might have a cold.

Common cold signs in a dog can include:

Sinusitis is an inflammation of the sinus cavities in the head. It has several causes, including:

Symptoms of sinusitis are similar to colds and ‘flu but is usually distinguished by the presence of an excessive discharge of mucous.

The pet’s discomfort needs to be addressed as well as the underlying cause of the sinusitis. For example, the dog may be allergic to dairy products in its dog pellets. It would make sense to change the brand of dog food you feed it.

If the symptoms of cold, ‘flu or sinusitis are allowed to persist without relief, they may provide opportunity for secondary infection, caused by:

These will cause the dog added distress and make the overall condition of the dog more difficult to treat. They will also severely impact the dog’s overall immune system and lower resistance to further disease.

Transmissible diseases and infections between dogs and humans

Although canine cold and flu viruses are not transmissible to humans, the secondary infections may be, e.g. staphylococcus.

A staph infection can cause food poisoning or severe skin lesions such as blisters or boils. If not treated, it can get into the blood stream and affect internal organs and prove exceedingly dangerous. Fortunately, it responds well to antibiotics.

Other transmissible pathogens are salmonella, brucella and pasteurella each causing their own list of horrific problems.

Rabies is a viral disease that is easily carried from one specie to another. If not diagnosed and treated in time, it is fatal.

In some parts of the world, it has been eradicated through vaccinations and strict controls on the movement of potential carriers across borders. In these countries, only 5% of infections are as a result of contact with an infected dog.

Rabies is transmitted through saliva. A bite or scratch that breaks the surface of the skin is necessary to spread the disease to humans. Dogs can contract the disease in the same way or by eating the contaminated flesh of an infected animal, usually a rodent. There is little chance of a dog contracting rabies from a human.

Fungal infections, such as ringworm, can be spread from humans to dogs and vice versa. Athlete’s foot can spread to dogs and is not confined to their feet only. Other similar fungi that thrive in damp folds of skin, are also contagious across species.

Fortunately, there is a range of effective antifungal remedies to address these health problems. If they remain untreated, they can spread throughout the body and to other animals your dog comes in contact with.

It is not advisable to use veterinary products for treatment of human conditions and vice versa.

Parasites, such as worms, do not discriminate between the species. It is advisable to regularly deworm the entire family – humans, dogs, cats, etc. to prevent the damage that can be caused.

These parasites do not necessarily migrate from one species to another directly but can be ingested through contact with contaminated water or soil. It is vitally important to wash your hands after gardening even if you have been wearing gloves.

These kinds of parasites can also be taken into the body by eating raw meat and unwashed raw vegetables. Always cook your dogs’ meat.

Many dogs have an unfortunate affinity for manure of any kind, whether to roll in it or to devour it. As far as possible, prevent them doing either of these unsavoury activities, for the sake of their health.

There is a rare though alarming condition, known as Alabama Rot, which affects dogs only. It seems to be contracted by their walking through contaminated mud. Please be alert to outbreaks in your area and consult your vet if you have any concerns. The condition is nearly always fatal.

Most colds and ‘flus do not take hold in dogs or humans who have healthy immune systems. As stated earlier, the immune defences are boosted at birth by colostrum when a pup first suckles.

During the weaning process the milk of a healthy mother increases the pup’s ability to fight disease.

Once the pup is weaned, it needs regular exercise to boost its lymphatic system, plenty of rest to restore its cells and a nourishing diet to build bone and muscle strength. Age-appropriate practices should see your dog having a healthy immune system throughout its life.

There are some diseases however that, because of their virility, potential for damage and novelty, require vaccines to help the dog’s body to fight the disease. These are diseases such as parvovirus, canine distemper and kennel cough.

The next time you are feeling under the weather with a cold and feel like you need a cuddle from your dog, don’t worry about getting close to them. It’s almost unheard of that dogs can catch colds from humans, so let him give you the comfort you need whilst you recover.

Dogs get sick just like humans. Whilst dogs can’t get colds from humans, they can get very similar ailments and illnesses.