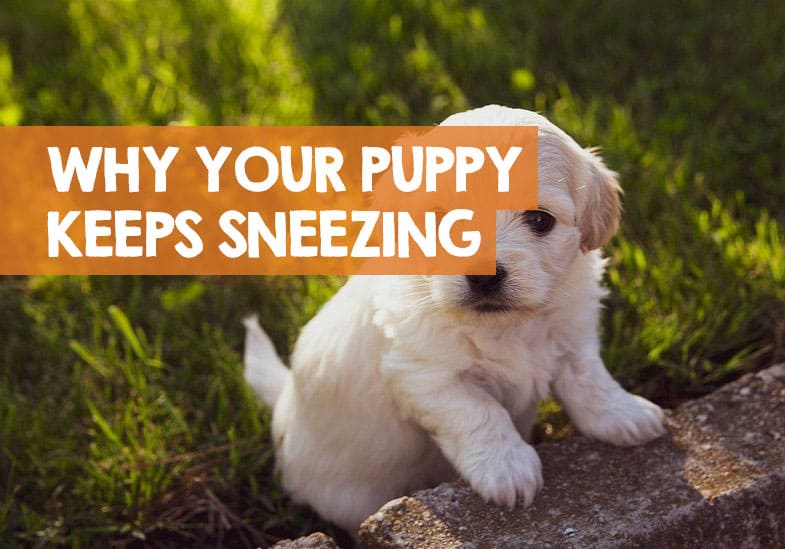 Seeing your puppy sneeze can be really cute, and it’s hard not to giggle a bit when you see it. However, if your puppy is sneezing all the time, or a lot, it can be cause for concern. Particularly when it’s combined with other factors too such sniffing, head shaking, lip licking, and a hacking or coughing.

In this guide, I will explain what the basic sneeze means, and why your puppy might keep sneezing more than you might consider to be normal. Here’s the short answer first, then more detail on what you should do about it if concerned.

Why does my puppy keep sneezing? Puppies will keep sneezing for reasons such as an allergy, foreign objects, illness, nasal mites, or other less common ones. Puppies also have developing immune systems meaning they can be more prone to sneezing episodes.

In short conclusion, there are many reasons why your puppy keeps sneezing. Most sneezing episodes will pass quickly and can be explained. However, there are signs to look out for so you know when to be concerned.

Please do consult with a professional vet if you any concerns, particularly if your puppy keeps sneezing and wheezing or develops a hacking cough.

Why your puppy keeps sneezing

All being said, let’s break down all the reasons why your puppy could keep sneezing and when to be concerned.

The main reason why your puppy keeps sneezing all the time is that it’s still building its immune system so allergies can be more pronounced. As they getting used to a new environment they will come into contact with things that are completely new to them which could cause them to sneeze.

This type of sneezing is entirely natural and will help to build up your puppy’s senses and immune system.

However, as they grow older, the sneezing should stop or become less severe. A few things that could cause your puppy’s sneezing are household chemicals, mold, pollen, and smoke. Your puppy sneezing for this reason is completely natural.

It’s not expected of you to change your house to fit your puppy but letting it get used to all the smells they possibly can help you detect what your dog is allergic to as canines can also have allergies.

In your puppy’s exploring stage, they tend to chew and sniff everything they come into contact with, how many pairs of shoes have you lost already? Unfortunately, this is something that you can’t control. In some ways, it will help to build a dog’s immune system as he or she gets used to everything around them.

However, something could be inhaled or ingested that could set off your puppy’s sneezing.

When your puppy keeps sneezing and coughing for this reason it is because they’re naturally removing the foreign object from his or her throat.

If the sneezing doesn’t stop and you can see something stuck in their throat or nose, seek veterinary assistance immediately.

3. Keeps sneezing as a calming mechanism

Moving into a new space can be stressful for anyone but it can be even more stressful for your puppy. At this stage puppies are forming new habits, learning a new environment, and getting used to humans and even other animals.

All of these factors could cause your puppy to sneeze because sneezing is a calming mechanism for them.

A few other calming mechanisms to look out for are walking slowly, yawning, and turning their head away. You can expect this sort of behavior when your puppy is still getting used to their environment so it shouldn’t be anything to be concerned about.

4. Keeps sneezing due to being a brachycephalic breed

Sneezing can be more common in certain breeds such as the brachycephalic breed which includes Pekingese, English Toy Spaniels, French Bulldogs, and Pugs to name a few. This is because they have shorter nasal passages that could cause them to sneeze a lot more when coming into contact with a foreign object or scent.

It is important to note that brachycephalic breeds have different problems but sneezing is not a disease so it’s nothing to worry about. You should only worry if your puppy overheats due to panting, otherwise sneezing is normal and unavoidable.

5. Keeps sneezing and coughing due to kennel cough

If your puppy is sneezing and making noises as if there’s something stuck in its throat it could be possible that your puppy has a kennel cough. Although it can sound alarming, your puppy can recover without treatment – even if it was caught in boarding kennels.

Kennel cough can be caused by a virus or bacteria that gets trapped in your puppy’s respiratory tract. Your puppy can fight the virus or bacteria if they are healthy as their tract is lined with mucus that should trap the infectious particles.

However, this natural layer of protection could be weakened if your puppy is exposed to smoke, dust, and cold temperatures.

A few symptoms to look out for are a forced cough, eye discharge, sneezing, hacking cough, and a running nose. These are similar symptoms to when humans get infections (don’t worry, they won’t catch a cold from you). Your puppy may not lose its appetite or energy but keep your eyes on the symptoms to make sure they don’t get worse.

Kennel cough is contagious so if you have other animals make sure to keep them separated while your puppy is still sick. Your puppy can get better over a few weeks without any treatment but if you want to treat your puppy’s kennel cough you can seek medicine to quicken his or her recovery.

If your puppy takes more than three weeks to recover without any medical assistance it would then be a good idea to take your puppy to the vet. It is extremely important to take your dog to the vet if he or she suffers from rapid breathing and lack of appetite because this can be extremely serious as kennel cough can lead to pneumonia.

For an extra safety precaution, you can give your puppy the vaccine that comes in three different forms, injection, nasal mist, and oral. Although this can help prevent kennel cough it doesn’t guarantee complete protection.

6. Keeps sneezing due to nasal mites

It could be that your puppy keeps sneezing and head shaking due to the nasal mites in the nose cavity. Sneezing, and reverse sneezing are a sign of a nasal mite infestation as you can see in the quote below.

Nasal mites can be cured in 85% of cases by using anti-parasitic medications. They aren’t a nice thing for your puppy to be afflicted with, here’s an explanation on what they are.

“Adult mites are non-burrowing and live on the mucosa of nasal cavities and sinuses. They feed on the keratin layer of the epidermis. Mites are highly mobile and easily transmitted by direct contact. Mites have been found on fleas, lice, and flies thus an indirect mode of transmission remains possible.” (view source)

Handy Hint: As well as nasal mites, ear mites are also something puppies can catch, typically leading to head shaking behavior. Puppies can catch ear mites from cats, so make sure all pets are treated.

Your puppy could keep sneezing because sneezing is often used as a form of communication or playfulness with other dogs and animals. While dogs play with each other they will sneeze to communicate with one another.

This form of sneezing is called ‘play sneezing’. The sneezing is to let the other dog know that they are comfortable and having fun so you can know that your puppy isn’t scared.

Another form of sneezing that is classified as communication is fake sneezing. This is used when your puppy wants your attention.

When your puppy is sneezing this way it will watch you see your reaction, making sure they have captured your attention as they had planned. They could even move closer to you and keep sneeze on you again if they feel as if you ignored them.

With these types of sneezing, it could be confusing but if your puppy is uncomfortable you’ll definitely be able to tell by their body language because this is another way for them to communicate with you.

It’s normal to fuss and worry over your puppy and as a result, seeing any odd behavior could scare you. This is completely normal but with the right information, you’ll be able to rest easy.

Of course, it would be a waste of time and money rushing to the vet after every other sneeze so it’s important to know when it is something to worry about in the first place.

Don’t feel silly if you stress over everything, it’s to be expected but with the list given above you should know what to look out for and when to seek medical attention for your pup.

The bottom line is though, if your puppy keeps sneezing and it’s not stopping, please do seek professional advice.