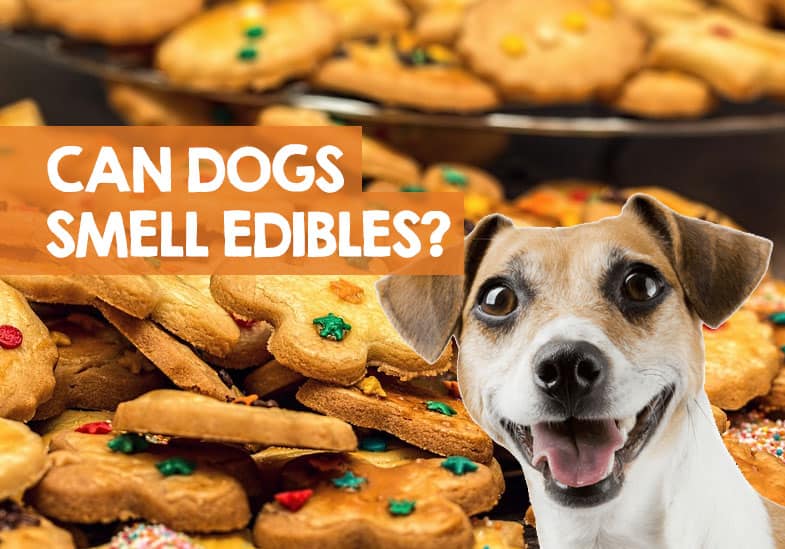 With edibles now being a legal substance in some states across the U.S, individuals are utilizing them for a plethora of different things including; recreational drug use, chronic pain relief, and sleep problems.

Given the legality (or otherwise) depending on where you are, how do drug sniffer dogs factor into this? Can airport dogs or police dogs smell edibles? The answer isn’t as clear cut as we would want, but here’s the short answer:

Although now legalized in 11 of the 50 states, edibles are still prohibited in the remaining 39. Sniffer or detection dogs are routinely used in the search for marijuana at county borders and airports and are often able to detect the presence of an illegal substance from the weakest of scents.

This, in turn, leads to a fascinating question. Can our dog’s famously well-known and impressive sense of smell reliably pick up on the scent of marijuana in an edible product?

Well, to answer that, we have to first understand a few other things:

How strong is a dog’s sense of smell?

According to leading scientists, dogs are about 10,000 to 100,000 times more effective at picking up scents than humans. The reason for this is due to dogs having an astonishing 300 million olfactory receptors inside their noses, with humans in comparison only having around a measly 6 million.

Because of this, dogs are continually motivated by the pursuit of new and exciting smells.

This organ is located at the bottom of the nasal cavity and is made up of two fleshy sacs that are filled with fluid, allowing dogs to both smell and taste and the same time.

But that’s not all, they also possess the ability to tell things immediately about other dogs by their scent. With a few sniffs, a curious canine can become aware of such things as whether another dog is in heat, if they are healthy, which owner they belong to, and more…

It is our dog’s incredible sense of smell that allows them to paint a detailed picture of what is around them. If like me, you find yourself regularly wondering why your dog is stopping so often to smell things, then this is the reason why.

Amazingly, they can smell something which has a lot of scents on it – such as a tree or bush – and essentially sense who or what has been in the area, and in their own way, take a glimpse into the recent past.

After taking this all into consideration, it is no wonder that dogs are used by the U.S for the detection of illegal substances countrywide – and that could mean dogs being able to smell edibles at airports, border crossing, and customers… if trained to do so.

How are drug sniffer dogs trained?

Sniffer dogs are handpicked and trained from a very young age. These dogs are chosen because they have been carefully evaluated and are selected if they show the right temperament and ability to focus on the task at hand.

Some breeds are typically more sought after than others due to their strong sense of smell. Usually, these are the sort of breeds we think of when picturing dogs working with law enforcement; such as German Shepherds, Beagles, and Bloodhounds.

Training for these sniffer dogs is rigorous for both dog and trainer, with the process often taking many months. Contrary to popular belief, dogs are not taught to detect drugs and are instead, taught to detect their favorite toys.

After going through an intense training program, they will eventually come to associate the smell of drugs with these toys – for example marijuana.

By far, the most common item used as a toy by trainers is a towel, as drugs can easily be hidden inside. After the dog is familiarized with the smell and object, the trainer will hide the towel in various locations and encourage the dog to search for it.

At the early stages of training, dogs will receive a reward as soon as they react to the scent they are searching for. However, later on in the program, they will only be rewarded after responding to the correct command from their trainer; such as down, stay, or bark.

After some time, the dogs will also be taught to recognize a host of different drugs and will become highly adept at sniffing out a variety of illegal substances and other items.

Depending on the profession the sniffer dog is employed in, they can also be taught two different ways to alert their handler to the presence of whatever item they are currently searching for.

The first technique; called an aggressive alert, is typically the primary method of alert that a drug sniffer dog will use. Once they have a scent, they will paw or try to dig in the area that they have detected the smell, alerting their owner to the potential presence of drugs.

The other is a passive alert and is mainly used by dogs in dangerous professions, such as bomb disposal. However, many sniffer dogs at airports will also use this method so they do not cause any damage to passengers’ belongings.

Dogs trained in this type of passive alert will get their owner’s attention by sitting down and avoiding disturbing the source of the scent. Keeping both trainer and dog safe.

Which brings us onto the evidence for dogs being able to smell for edible marijuana.

Handy Hint: Hemp is said to smell similar to marijuana, so does this mean that drug dogs can smell for hemp oil and hemp products?

It’s still up for debate, even by the police and airport handlers.

Most of the evidence for dogs being able to successfully detect and smell the scent of edibles is based on second-hand accounts from online forums, which are not always the most reliable of sources.

Surprisingly, there is a lot more evidence to the contrary instead, with dogs potentially being unable to detect the scent of marijuana in most edibles due to changes in the molecular structure of the plant during cooking.

However, it is important to remember that we take a sustainable amount of this information with a grain of salt… with concrete facts on the topic being rather few and far between.

There are also other things to take into consideration too. As mentioned before, edibles come in a massive variety of different shapes, forms and potencies.

When made at home, marijuana edible products could likely end up being different from edibles bought online or in stores, increasing the likelihood of them being easier to detect for our canine friends.

Nevertheless, officers in law enforcement believe that dogs could be trained to smell for edibles if the need was great enough, but do not currently see a reason for teaching them to do so. Airport and police are probably more concerned with the bigger narcotics problems such as MDMA, meth, heroin, and cocaine for example.

That being said, they are also keen to stress that failing to declare any sort of edible cannabis product at borders or airports is a criminal offense, with potential arrest and prosecution likely being on the cards for anyone who decides to try and cheat the system.

Some people also believe that if they can smell marijuana in edibles, surely dogs can as well. Although this is a very simple way of looking at a rather complicated subject, there could indeed, be some truth to it.

For example, certain varieties of edibles contain turpentine which is responsible for giving marijuana its distinctive smell. Described as a skunky and earthy aroma, sniffer dogs will lock onto this scent if it is present in any sort of product, edible or otherwise.

Expanding on this, it’s also interesting to note that a large majority of edible products only contain the THC component of marijuana. This component is claimed to be virtually odorless.

Whether or not our dogs can successfully smell this isn’t entirely clear right now – but we do know that they can detect scents that are pretty much undetectable to us. Taking this into careful consideration, it wouldn’t be too much of a stretch to find out that dogs can indeed pick up on the scent of THC, too.

For once it’s actually hard for the Doggysaurus to give you a clear black and white answer on whether dogs can smell edibles with marijuana in it.

Although there is a wide variety of ways in which edibles are made, such as brownies, candies, and popcorn, you would still have to assume a dog would be able to… given how sensitive their sense of smell is.

I regularly write about the awesome things that dogs can do and smell for, including: